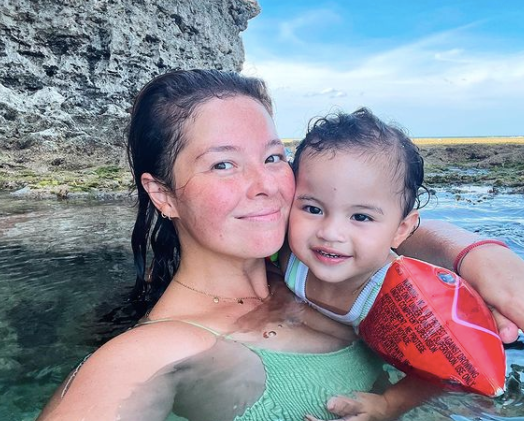 Actress Andi Eigenmann believes it is perfectly fine for her children to have adventures and make discoveries early on in their lives.

She acknowledged the benefits of these explorations, as seen on her Instagram page today, where she shared a series of photos of herself and her daughter Lilo, swimming in a rock pool in their island home of Siargao.

“Swimming in the [rock pool] was new to her (as a toddler) so before jumping in to join her, I wanted to see what she’d do,” she said.

Observing her daughter by her lonesome while in the waters, Eigenmann noted that her child was “so steady and calm, carefully observing her surroundings.”

“She quickly noticed all the colorful fish swimming underneath her (cus the water here is just that clear!), and for some reason that’s when she [realized] she was safe to tread about and enjoy swimming with all the fishies,” she shared.

But just like any ordinary mom, she also gets worried when her kids try something for the first time. What she does to handle this is to keep the fear to herself as best she can. She thinks it wouldn’t be fair to hold the children back just because of her own fears and worries.

Lilo is Eigenmann’s daughter with her partner, professional surfer Philmar Alipayo. She also has a son with him, Koa, while her eldest daughter is Ellie with former boyfriend Jake Ejercito. She, Alipayo and the three children marked her 31st birthday last June in Siargao. JB