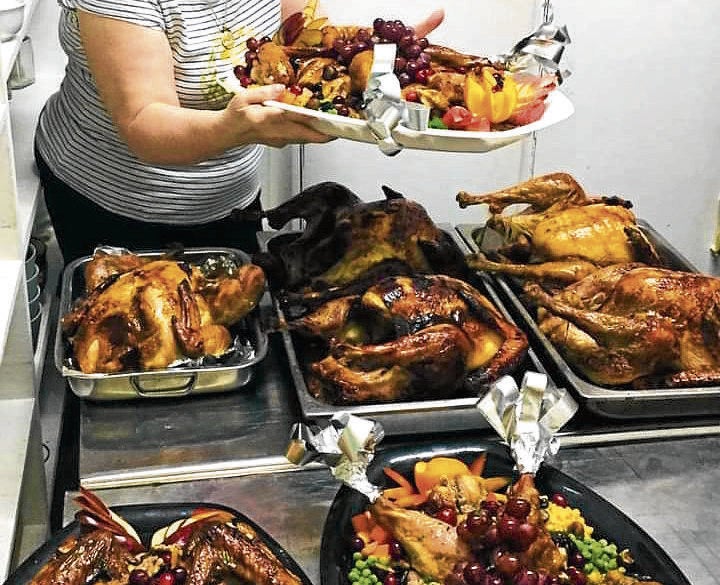 Betina Legarda: “Someone’s got to continue tradition to keep family together!”

Cooking ‘cocido’ for a large crowd

Whenever someone asks me how I got into the food business, I smile and tell them that I am actually an AB graduate major in History. Not in cuisine.

My parents entertained a lot since my dad, Rene Kahn, worked at San Miguel Corp. He would hold meetings and large gatherings in our house in Malate. Quite often, he would ask me to handle the food and make sure it was good. I was always excited when he gave me the responsibility of making sure everything would be delicious and enough in quantity. (It gave me the chance to bite into the yummy pastries that were lined up in huge trays on the buffet table.)

Coming from a large family—we were 12 siblings—I was used to cooking and baking for a large crowd. For our Sunday lunches, we could easily be 40 or more and it was no big deal! My mom’s brothers and sisters would come with all our cousins and friends.

My dad’s favorite Sunday lunch dish was a complete “cocido menu” that had tons of boiled meats accompanied by assorted vegetables, all in a huge caldero of terrific broth made from scratch using chicken and beef bones. At the time, absolutely no bouillon cubes!

These past years, our home has been the venue for family dinners, such as during Christmas, where we usually number around 80 to a hundred people. Many still ask me if I get nervous preparing food for a large group. I still smile and answer that I love cooking for family and friends. Someone’s got to continue tradition to keep family together!

I remember eons ago how my classmates from Assumption Convent (Herran) would join me in the library and help me copy recipes from magazines and books. I would test the recipes and have them taste whatever I cooked or baked. What happy memories! We still laugh about this since no one thought that I would become a chef later on.

I got married right after college and had to really learn how to cook and bake because my husband’s family were also food lovers. It was at this point that I seriously started taking culinary classes, both food and desserts, from so many good culinary teachers.

In the 1970s, my husband, who worked for an oil company, was assigned to Cebu. There, I had the time to take longer courses in bread making, cake decorating, native cuisine and other interesting food. I enjoyed going around the Visayas and Mindanao areas, meeting new friends who unselfishly taught me some of their native cuisine and recipes, which I treasure and still use today as part of my repertoire.

Many of the heirloom recipes I use today, I learned and adapted from my husband’s family: his mom Rosario Lobregat, his “Tia Abuela” Dolores Lobregat, Maitoni Tabuñar, Tita Moning Legarda and Tita Bombing Legarda-Valdez.

From the Santamaria-Kahn side, I was also taught by my mom’s sister, Tita Chelito S. Campos (of Kookie Monster); Tita Luz Kahn, who gave me some of her French cookbooks and would describe how each dish was done in Paris when she studied there; Fanny Santamaria-Romero, who taught me how to make some terrific cocktail food like Steak Tartare (I have not tasted one as delicious as hers!); and my mom Dolores, who baked delicious Orange Butter Cake, which my dad loved.

There was also my Tio Pepe Gascuñana, who was like my second dad. Tio Pepe was from the north of Spain and owned four Spanish restaurants in Manila during the ’50s and ’60s. I lived with him and his wife during my younger years and would watch him cook fantastic Spanish food and desserts. He greatly influenced my love for Spanish food.

Lastly, there was Amalia Pastor who watched us whenever our parents went abroad and taught me a lot of dishes.

With this family background, I was motivated to cook and bake as best as I could. Eventually, friends and family started ordering food and desserts. Although it started as a hobby, by the time I moved back to Manila, I was already into the food business but still enjoying it as a hobby.

Today, we have Gourmet’s Palate, Bamba Bistro by chef Tina Legarda, Gourmet’s Charbroiled Burgers and Betina’s Kitchen that keep me quite busy. I believe one has to love what one does in order to succeed, and I thank God every day for his blessings.

Bouillon cubes to add to broth

Water to cover each meat in separate pots

Water to cover each vegetable in separate pots

Separate each meat in a different pot.

Divide onions, carrots, leeks, some celery, tomatoes in each pot. You may add bouillon cubes to each pot if you wish (2 cubes per pot).

Add enough water to cover meat. Boil each of the meats and remove the scum.

Simmer till tender. (You can do this a day before and chill after.)

Use some stock to cook the pechay, cabbage and Baguio beans.

To serve, put each meat and each vegetable in separate containers.

Serve with eggplant salad. Do this the day before and chill: Broil 8 eggplants and peel. Mash with fork. Add fresh garlic, olive oil, salt and pepper to taste.

Serve also with Salsa de Tomate. Make this the day before.

Add 1 can tomatoes (I use Capri), some chicken broth as needed, and season with salt and pepper. Simmer over low flame for 40 minutes.