With no clients to dress up, fashion designer picks up his paintbrush | Lifestyle.INQ ❮ ❯ 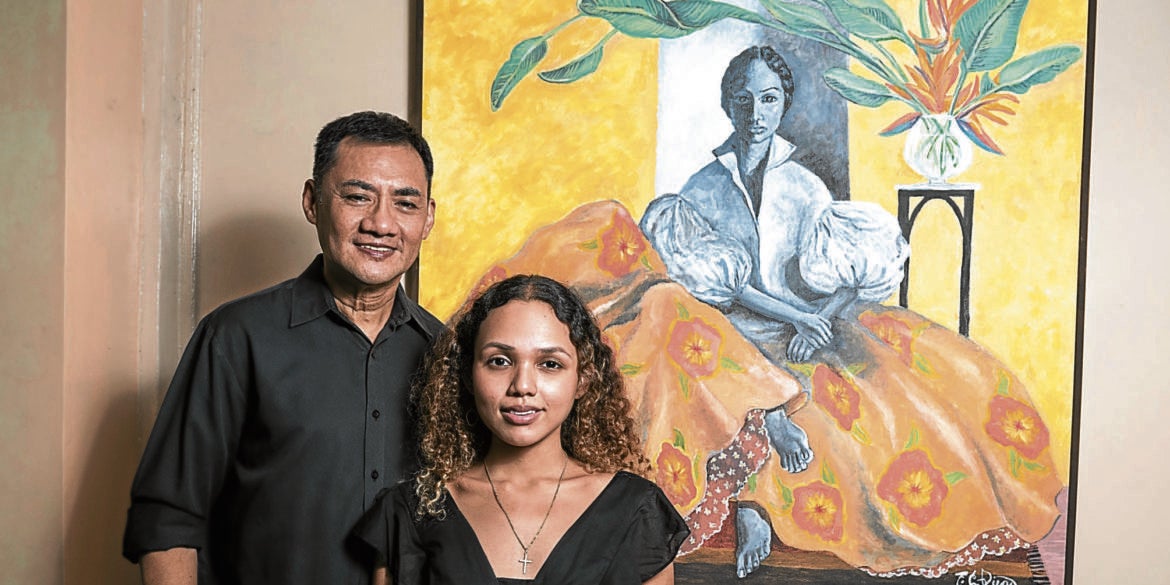 Fashion designer-painter Edgar San Diego and muse, daughter Abby, in front of her portrait that started it all

With no clients to dress up, fashion designer picks up his paintbrush

In a faded photograph taken in the 1920s, a school principal, clad in a fancy traje de mestiza, is mounted on a white horse. Designer Tony Cajucom recalls his Aunt Trining, who was always stylish even while she rode around the different towns.

Intrigued by her character, Edgar San Diego created a portrait, “Teacher Trining,” as a well-dressed termagant holding the reins of a white horse, looking for children playing hooky under the trees. “In real life, she was kind and lived to be 100,” says San Diego.

“Teacher Trining” is one of 44 paintings in San Diego’s solo exhibit, “Baro’t Saya, Tuwa at Ligaya.” Barring quarantine restrictions, it will be held Sept. 6-13 at the SM Megamall Fashion Hall. The paintings are posted on his FB (Edgar San Diego Fashion and Art).

Since the pandemic, many fashion designers have seen their businesses nearly collapse. Meanwhile, San Diego, who has a fine arts degree from the University of Santo Tomas, picked up his brushes and acrylic paints while cleaning up his closets.

To bide his time, he photographed his daughter, Abby, in different light settings and used her face as his muse. His first work pictured Abby wearing a puff-sleeved blouse and a voluminous floral-printed dress, sitting under heliconias.

A romanticist and a Filipinianaphile, San Diego expanded his subject of women, wearing the Philippine dress in different eras.

He based his paintings on such books as “Fashionable Filipinas: An Evolution of the Philippine National Dress (1860 to 1960)” by Mark Higgins and Gino Gonzales.

“I picked up the proper costume for each period—the correct silhouettes, the hair and makeup,” San Diego says.

“Turn of the Century,” a pictorial history book by Gilda Cordero Fernando, gave him ideas for graphics and backdrops for his subjects.

San Diego’s works are characterized by vibrant colors, dreamlike scenes and expressive figures. The paintings do not only wax nostalgic for bygone eras, but also for Filipino values.

“I made the colors happy and the subject matter light as the antidote to the uncertainty of the times,” he says.

“Happy Valentine’s, Hija” is his homage to the 1950s movies of LVN. An ingenue in a pink terno with a serpentine skirt sits on a divan and looks at the flowers from admirers while her nanny gushes.

Set in a club before the war, “Bukod Tanging Ganda” highlights an unmade-up girl in a blue traje de mestiza, admired by men in white suits. The men ignore the other women in Western clothing. It is San Diego’s statement on the Filipina’s simplicity and old-fashioned values.

He captures other nuances of the Filipina, such as the languorous, long-haired maiden lazing on the couch and women fluttering their fans.

“Carnival Queen” is a mix of past queens who reigned in the biggest prewar social event and festival, the Manila Carnival. Encircled by circus acts, the main subject and first Carnival Queen Pura Villanueva is atop a zebra. She is surrounded by other winners such as San Diego’s late aunt, Nice Yap, who wears pink Filipiniana, while standing on a sphere.

San Diego portrays religiosity in the local context, such as the Blessed Mother wearing 19th-century traje or crowned with anahaw leaves instead of a halo.

In a romantic vignette, a woman looks at the mirror and sees the reflection of her suitor perched on a tree branch while another shows a couple huddling under a banana leaf. The artist goes surrealist with a scene of Jose Rizal on his Luneta shrine reaching out to Maria Clara on the moon.

He injects humor in an image of a mother serving breakfast, wearing a camisa with angel wing sleeves and a saya painted with the typical Pinoy fare of longganisa, fried eggs, mango, salted eggs, daing, rice cakes and fresh milk.

“Ang Tyaga” is a girl on a tree fastidiously crafting a terno from the leaves while her lover waits patiently for her.

Making clothes is in San Diego’s genes. He grew up assisting his mother in her dress shop. On weekends, he likewise helped his aunt who was also a seamstress. As a working college student, he painted on the jersey and georgette gowns for Junjun Cambe and Kiko Rodriguez, who invariably introduced him to other designers, fashion directors and models.

After graduation, San Diego created window displays for the Plaza Fashion store at Harrison Plaza. He was supervised by Barge Ramos, who invited him to be one of the pioneers of the Fashion Designers Association of the Philippines (FDAP).

San Diego made his foray into theater costume design when sculptor Gabriel Barredo brought him to his aunt, Baby Barredo, co-founder of Repertory Philippines. He has since designed for several plays and musicals for Rep and other theater companies and movies. In the past four decades, San Diego earned his reputation for his stylish Filipiniana.

Two days after he turned 60 on March 15, 2020, the national lockdown was enforced. With no work for months, he subsisted on his savings and sent some ayuda to his sewers. In quarantine, he started painting and posting his works in FB to augment the sparse business in fashion.

Throughout the pandemic, most of his clients were overseas Filipinas who ordered Philippine dress. He was lucky to get two wedding clients here. With his sewers working from home, San Diego has been sending the materials to them. They show the garment via Messenger for his approval and have the final product delivered.

On his future, he muses, “Time will tell, but I’m still keeping my shop.”