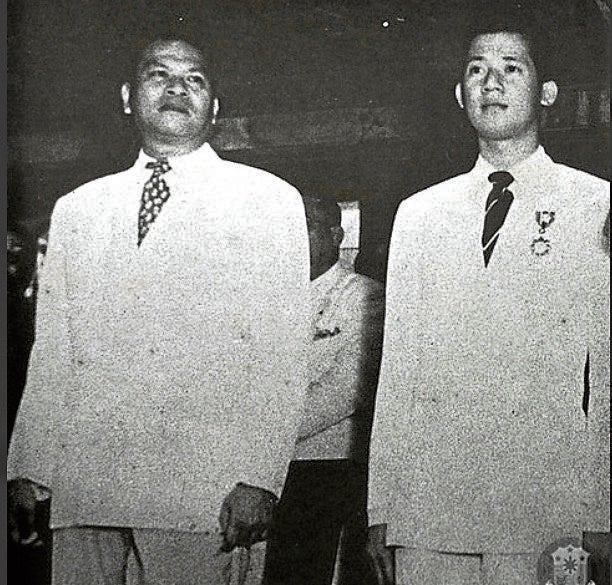 Eighteen-year-old Ninoy Aquino (right) receives the Philippine Legion of Honor with the rank of officer for his service in reporting on the state of the Philippine troops in Korea. Beside him is Defense Secretary Ramon Magsaysay. —PHOTO FROM “NINOY: THE WILLING MARTYR” BOOK

Becoming a hero does not happen overnight. And Ninoy Aquino’s journey to heroism was uniquely his

On National Heroes’ Day, Aug. 30, we celebrate collectively the deeds of all those who struggled for our country’s independence and contributed to its growth as a nation. Only three of our heroes have a national holiday exclusively in their honor—Jose Rizal (Dec. 30), Andres Bonifacio (Nov. 30) and Benigno “Ninoy” Aquino Jr. (Aug. 21)—for their landmark impacts on our country’s history.

Rizal’s execution by the Spanish government in 1896 provided the impetus for the Philippine Revolution, which gave birth to the First Philippine Republic and our first taste of independence, albeit short-lived at that time.

Bonifacio, “the father of the Philippine revolution” led the first broad uprising against centurieslong Spanish rule.

Aquino, “the willing martyr,” died at the hands of government agents upon his return to the Philippines. His death triggered the rise of People Power, which eventually ousted a homegrown dictator and restored the democracy we enjoy today.

Becoming a hero does not happen overnight. Heroism is mostly a journey, a process which involves cumulative building blocks in a hero’s life—the instilling of certain moral and social values; the adoption of and commitment to a particular cause; dedication and perseverance in pursuing it; and if necessary, willingly sacrificing one’s life for it.

For Rizal, the process involved observing the prevailing conditions of inequality, abuse and oppression of his countrymen under colonial rule. This led to his developing a strong sense of nationalism and Filipino identity, which he expressed in his reformist writings and novels. For his convictions and advocacy, he suffered exile and was ultimately executed by a colonial government which considered him a serious threat to its rule.

In the case of Bonifacio, his limited education propelled him to self-study and the wide reading of Rizal’s novels and foreign libertarian literature, which led to a passion for independence and his founding of the Katipunan. Being a “commoner,” Bonifacio rallied his natural constituents, the ordinary Filipinos, to his cause, thus earning him the title “the great plebeian.”

Aquino’s journey to heroism was also uniquely his. Originally dubbed “the wonder boy of Philippine politics,” he burst on the scene as a teenage newspaper reporter who promptly became a war correspondent. He covered the Korean War from the front lines with the military contingent sent by the Philippine government in compliance with its commitment to the United Nations. For his service in the undertaking, he received the Philippine Legion of Honor award at the age of 18.

Not long after, Aquino successfully negotiated the surrender of Huk supremo Luis Taruc as the special emissary of President Ramon Magsaysay.

From there, he went into politics, breaking age records on his way up the political ladder as the youngest to hold the positions of mayor, vice governor and governor, and finally as senator.

But his political career came to an abrupt end when President Marcos declared martial law in 1972. Then a senator, Aquino was imprisoned together with key leaders of the political opposition, journalists, student activists and other “leftists.”

And even after his fellow political detainees were released, Aquino languished alone in prison for more than seven years. In that span of time, he was subjected to personal humiliation, physical deprivation and the psychological torture of solitary confinement.

In those seven years, his journey to heroism took many twists and turns.

He went on a 40-day hunger strike to protest his unjust detention and his trial by a sham military court. His hunger strike only ended when he was rushed to a hospital and resuscitated by a government afraid to have a martyr in its hands.

From his jail cell, he led the candidates of Lakas ng Bayan (Laban), his protest-inspired political party, for seats in the martial law-bred Interim Batasang Pambansa. He was not allowed to campaign personally, and as expected in a rigged election, not a single candidate of Laban won a seat.

In 1977, he was finally sentenced to death by the kangaroo military court even as he steadfastly refused to participate in its proceedings.

In 1980, he suffered a heart attack in prison and was allowed to leave the country for treatment abroad and subsequent exile.

After three years in the United States, and despite many dire warnings, Aquino decided to return to the Philippines in the hope that he could convince Marcos to change course to save the country, whose situation was fast deteriorating, from eventual collapse.

Aquino did save the country, but in a way those responsible for his death did not expect. His assassination was the tipping point which emboldened a previously daunted nation to overthrow a seemingly well-entrenched dictatorship and restore its lost democracy.

Aquino’s journey toward heroism, like those of Rizal and Bonifacio before him, was a transformative and transcendent process in the pursuit of an ideal. A key element, by his own account, was his spiritual epiphany, born of his trials in detention, which freed him from his worldly ambitions and replaced them with a nobler aspiration. The love of freedom—and the will to regain it when lost—is Ninoy Aquino’s continuing legacy to us, his countrymen.

Let us honor this “willing martyr” of our time by keeping his legacy alive in our hearts on Ninoy Aquino Day, this Aug. 21. Let us prove that he was right when he said, “The Filipino is worth dying for.” —CONTRIBUTED INQ