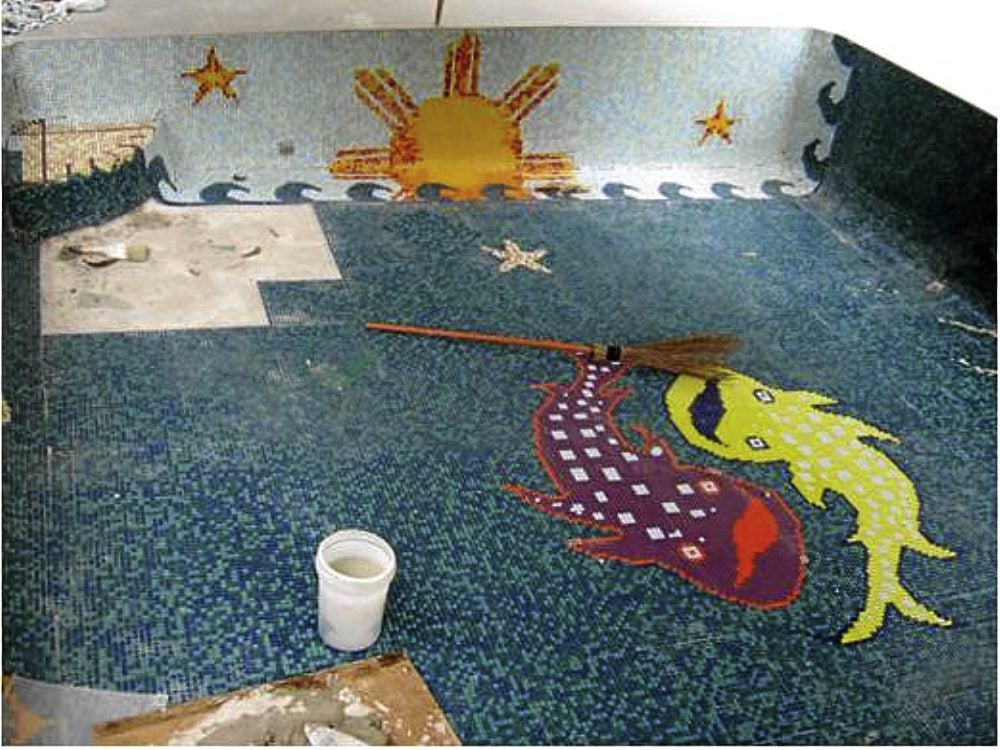 It was the first rain of Christmastime when South Bay village asked Fr. Rey dela Cruz, SVD, to bless the swimming pool, with Rep. Roilo Golez as ninong.

It wasn’t an ordinary swimming pool or a new one.  The  board of directors of the village had just completed refurbishing and re-tiling the pool.  Thanks to good husbanding of resources, the village was able to halve the cost.  Which left enough for a Manuel Baldemor mosaic mural on the 12 x 12-ft kiddie pool.

In 2009, Baldemor collaborated with two mosaic artists, Sylvie Henot from Dordogne and Francois Sand from the Pyrenees, to execute his illustration of the intervention of Our Lady in People Power into a mosaic mural for the Basilica of St. Therese in Lisieux, French Normandy.

For our kiddie pool, Baldemor drew two butandings—whale sharks which migrate from May to November to Donsol, Sorsogon.  The illustration was interpreted into mosaic by my niece Gigi Armonio and three masons—Johnny Hufalar, Richard Mamuyac and Edwin Estrada.

Golez took one look at the larger swimming pool next to the kiddie pool and suggested that Baldemor do a larger mosaic for it—of Lolong, our Guinness book record-breaking croc.

The kiddie pool is bordered on the north wall by a nautical compass and a seahorse; the south has the Philippine archipelago including  of Kalayaan islands and Panganiban Reef.

The east wall shows the day with a stylized sun of the Philippine flag and two stars above it (a third under water is a starfish).  The west has a moon winking on a starry night, including a star as Filipino Christmas parol.

That’s quite a big splash on the art scene!