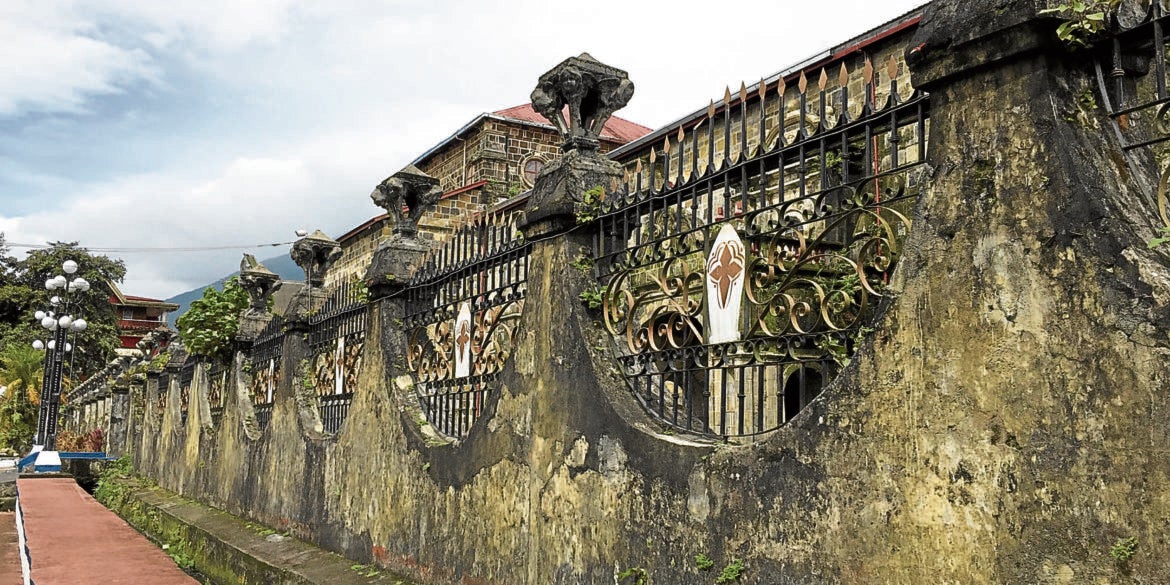 Beyond the famous Pahiyas festival and the 'longganisa,' the municipality in Quezon boasts architectural sites from the Spanish era

The first things that come to mind when Lucban is mentioned are the eponymous pancit and longganisa, the famed Maytime celebration called Pahiyas, and the relatively recent Kamay ni Hesus pilgrimage site.

Obviously, its most prominent landmark is the church complex of San Luis, Obispo de Tolosa, which dates back to the 17th century. It is also home to one of the most beautiful Rizal monuments in the country.

The church complex, recently restored by the National Historical Commission of the Philippines, was built using stones of different hues, perhaps one of its striking features. Interestingly, the catenated wall is called “quince-quince” by the locals, as both sides, separated by the side portal to the church grounds, are equally divided into 15 sections each.

The town’s neo-Gothic Catholic cemetery located a few blocks away from the church, which still has its perimeter wall and the ruins of the mortuary chapel, also dates back to the Spanish period.

A curiosity inside the sacred grounds are the concrete bone boxes built along the central street and alleys, perhaps a local adaptation to the confined space of the cemetery, but also an old secondary burial practice.

Some of the oldest date back to the American era, as gleaned from their Art Deco designs.

Just like its neighboring town of Tayabas, Lucban also has a number of Spanish colonial bridges, some of which still exist to this day.

There were at least six stone bridges built in Lucban mostly in the 19th century: the no longer existing Puente de Tumuloy and Puente de Princesa, and the still extant Puente de Binusuan, Puente de Bamban, Puente de Margibolo and the partly damaged Puente de Capricho (also Arco). There are also at least three American-period bridges in town, all built sometime in the 1930s, most likely by the then Bureau of Public Works.

The markers of the nonextant Spanish colonial bridges are displayed in front of the town’s reconstructed Escuela Pia, waiting to be properly stored or displayed inside a museum.

Running perpendicular to the quince-quince and beside the town’s plaza, with a remodeled American-era bandstand, is the malaking bambang (big canal), believed to have been built in the 18th century. Often overlooked, these canals are examples of Spanish colonial engineering found all over the country. Lucban’s canals are part of a complex water distribution system of free-flowing water emanating from Kamatian River and emptying into the tubigan (rice fields) east of the town center.

The system starts from the upper portion of the town, called bunggo, where a dam was built during the Spanish period at a portion of Kamatian River, diverting clean water mainly for household use to the malaking bambang, which snakes through the poblacion area.

It was used to operate the bayuhan (pounding machine) of a miki (a type of noodle) factory in town and was in use until the mid-20th century.

Prior to the destruction brought by World War II, Lucban had many bahay na bato-type houses, with a first level made of stone and a second level of wood.

Unfortunately, most of these houses were damaged or destroyed, just like the church complex, which suffered heavily. Some of those that survived, particularly on Daang Tayabas, were adaptively reused as commercial establishments and restaurants of popular brands.

Curiously, a number that somehow survived the war (in ruins) and the ravages of time were not torn down, but reused as bungalow houses, business establishments, or both. These houses are found all over the originally four barangays of the town’s poblacion, which was divided into 10 areas in the 1970s.

Another largely unknown aspect of Lucban’s built environment are the ruins of the caballeriza adjoining the convent. Not much of it is left, but few sections from the end of the convent to General Lukban Street remain.

The remnants are an amalgam of different construction materials, such as adobe blocks, river stones and bricks. The caballeriza or cuadra was used as a stable for horses used for transportation, just like the one inside the church complex of Sta. Barbara in Pangasinan.

Regalado Trota Jose, in his 1991 book “Simbahan,” notes that the caballeriza is normally part of the 19th-century convent together with the inner courtyard, bodegas, sheds for carriages and even wells.

Lucban is known for its Pahiyas, a festival honoring its patron saint San Isidro Labrador on May 15, where carabaos are trained to genuflect just like the more popular kneeling carabaos of Pulilan, Bulacan.

Also during the Corazon de Jesus celebration around June of every year, aside from the sagala and fireworks display, one of the main attractions is the mag-asawang higante roaming the town’s streets, entertaining (or scaring) the children.

The higante figures are the same as those popularized by Angono in Rizal province, evidence that both aforementioned traditions are not exclusive to specific places.

On food, apart from longganisa, pancit and hardinera, Lucban also has Pavino’s pianono; the pancit and chopped banana heart dish called pusô, which is often served by the eateries at the town market; and the pakô (fern) salad by PH Resto. —CONTRIBUTED INQ

The author extends his gratitude to Clemente Veluz, Cornelio Rañeses, Aurelio Maguyon Jr., Hans and Claire Yao, Mon Mercado and Michael Sorne for their invaluable assistance in writing this story.