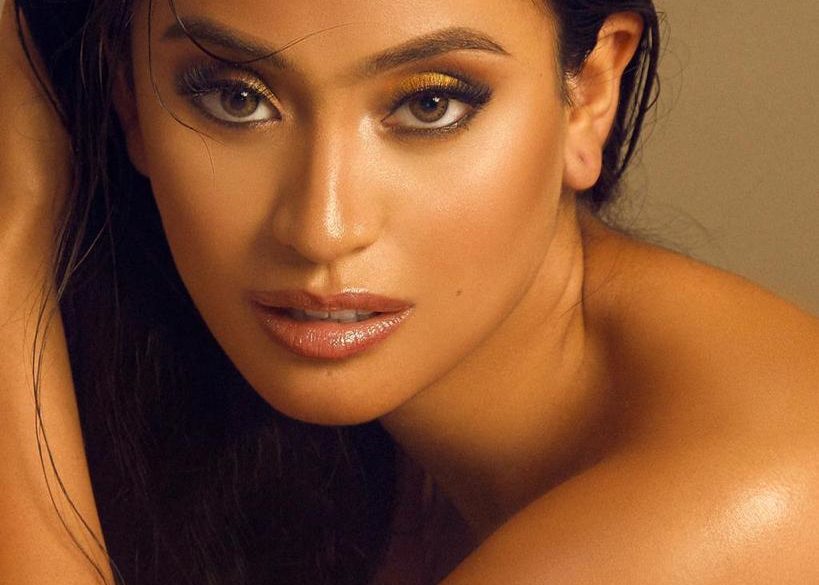 MANILA, Philippines — Simone Nadine Bornilla, 18, is joining her first major pageant. And who could be prouder than her two dads?

To say that her parents—Dr. Jumel Bornilla and Manix Genabe—are proud could be an understatement as Simone gears up for her Miss Universe Philippines (MUP) stint.

Simone has been named as among the Top 50 candidates at the MUP and is vying to advance to the Top 30 who will compete on coronation night in September.

But Simone’s pageants are more than just competitions for Doc Jumel and Manix.

(During their younger years, we were always together. But of course, while they grow up, they have their own friends, their own rooms. What unites us as a family?”)

“Pageants,” he said in unison with Manix.

Paolo, Simone’s brother who was studying in Australia, flew to India to show support for her at the Miss Teen International competition. He had also trained Simone for the question and answer portion in her first-ever pageant.

At 18, Simone’s MUP stint has also become part of her coming of age story—at least in the eyes of her loving dads. She used to be guided by them but now, she handles pageant preparations all by herself.

“When she was a teenager, even if she can do it on her own, we always want to be beside her just to make sure everything she does. The typical stage parents. But right now, even with interviews and all, she handles everything on her own,” Manix said.

Doc Jumel admitted it was “bittersweet”. At times they wonder why they were not consulted on Simone’s decisions. At the end of the day, Doc Jumel said, “you have to let them fly on their own because it’s the only way for them to learn everything that they need to learn in life.”

It was when Simone was about five years old when his dad Manix entered her life. Manix recalled meeting Doc Jumel in Puerto Galera in 2008 after the Doc Jumel, the only doctor in the group, treated Manix’s severe allergy.

“The allergy was a blessing in disguise, he literally saved my life. That’s how we met,” Manix said.

Manix likened their story to that in the song “Isang Linggong Pag-Ibig (One Week of Love)” by Imelda Papin since they started to live together just a week after meeting each other.

“We were living in together and then he just told me, ‘I need to get my kids.’ And then I said, ‘Huh, you have kids?’ I had no choice and actually I liked the idea of having a family. It was like instant noodles— instant boyfriend, instant family,” Manix said.

Doc Jumel, in an attempt to explain the casual reveal of having kids, admitted he had misgivings because he was unsure if the relationship will work.

(That time I felt like oh my, this looks serious he might find out that I have a child and get turned off. He might say no, he might be shocked. So I was really hesitant to let him know. Then with the grace of our Lord, he accepted me with kids. Then we got the kids from my parents. We started our family)

Simone has proudly introduced herself as a person who grew up in a gay family in the MUP preliminaries and other interviews.

“One thing that definitely makes me unique is that I grew up in a gay family. I was raised by two men and over the course of my life looking back, I don’t think I would’ve had it any other way,” Simone said in one of her introduction videos for the pageant.

“They’re definitely the inspiration in everything that I do,” she said.

For Simone’s dads, to be honest about who they are and what they’re going through was key to Simone’s upbringing. It could also be the reason that Simone made it an advocacy to fight for the rights of the LGBTQ+ community—to fight for her dads’ rights—on the MUP stage.

“So with Nadine, we never had to sugarcoat na ‘This is Tito Manix, I’m the best friend of daddy.’ No, it wasn’t like that. I was called daddy the first day I met her,” Manix added.

Growing up, Simone and her family were no strangers to prying eyes for simply being who they are.

Setting their sights on a boarding school in Australia, Manix and Doc Jumel said they intended to send Simone to a Catholic international school to add to her credentials but to no avail. The reason? She came from a gay family.

“I took the liberty of calling the admissions office and then I was told that because Nadine comes from a gay family, she cannot be accepted in that school,” said Manix.

“That is the most disheartening thing that has happened to us because we’re a gay family. We believe that if you’re applying for a school, the merit of the child should be the foremost consideration. It’s not actually the family where he or she belongs.”

Manix said the rejection from the Catholic school happened even as no less than Pope Francis expressed support for LGBTQ+ individuals and even endorsed same sex-unions saying “Homosexual people have a right to be in a family. They’re children of God and have a right to a family.”

Since marriage equality does not exist in the Philippines, LGBTQ+ couples cannot be recognized as each other’s legal spouses—the very cause of many other difficulties for Doc Jumel and Manix on matters of inheritance, insurance, hospitalization, and others.

“One more thing. We have a car under his name, na-carnap yung kotse. I took the other car and I went to the police station trying to report the carnapped car. And then I was asked, ‘Kaano ano yung may-ari?’ Sabi ko, ‘He’s my partner po, he’s my life partner.’ Di nila gets. Sabi ko, ’He’s my boyfriend po.’ And then he said, ‘Ay hindi ka pwede magreport dapat ang magreport yung boyfriend mo,’” Manix said.

(One more thing. We have a car under his name, it was stolen. I took the other car and I went to the police station trying to report the stolen car. And then I was asked: How are you related to the owner? I said ‘He’s my partner, he’s my life partner. They don’t get it. I said ‘He’s my boyfriend’. And then he said ‘Oh, you cannot report, the one who should report is your boyfriend.)

Doc Jumel was on duty at the time and in the end, they were unable to recover the car.

These cases may be “shallow” to some, but these are the struggles of same-sex parents that Doc Jumel and Manix hoped would draw attention when Simone goes up the stage for MUP.

Just as Doc Jumel and Manix give their all-out support to Simone, their daughter does the same for her parents.

In a piece she wrote for a local paper, Simone said: “I want my experience as a candidate on Miss Universe Philippines to be fruitful in encouraging the members of the LGBTQ+ community to raise their voices as well.”

“I want to be able to use my platform to share their stories and fight off those that intend to do harmful crimes towards them. Because I mean it when I say that I am a strong ally, and this platform alone gives me the ability to prove just that.”

For this, and many other things, Simone’s parents are more than happy and proud to have raised a beauty queen.