Shein is ‘shady’ but cheap—so can we blame people for buying? | Inquirer Lifestyle ❮ ❯ 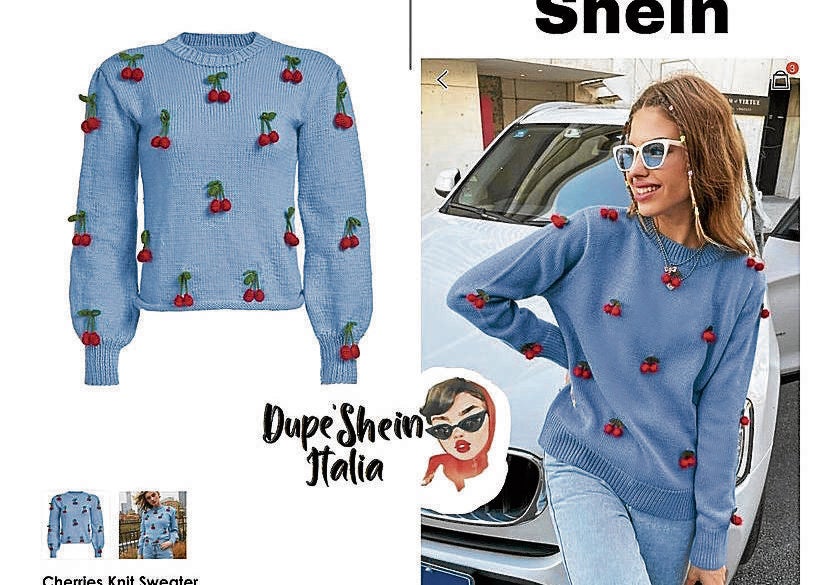 Designer Lirika Matoshi’s strawberry top, said to have been ripped off by Shein. —@DUPESHEIN_ITALIA INSTAGRAM

Shein is ‘shady’ but cheap—so can we blame people for buying?

Vintage fashion shop founder Jodinand Aguillon posted on TikTok styling tips for the multiway “fan-inspired Mood Dress” that he designed for his Instagram store called Glorious Dias. He made by hand the colorful figure-friendly infinity malong with adjustable ties, and followers loved it. But a user, @lois_cee, warned: “And then Shein will steal and release a concept the same as this.”

Shein, the controversial fashion and lifestyle brand, is accused of notoriously knocking off independent creators who have no means of going against a global company. It has been around since 2008, and according to its website, “Shein is an international B2C (business-to-consumer) fast-fashion e-commerce company.” From where and by whom, it doesn’t say.But the mysterious Shein (formerly She Inside) isn’t just fast fashion; it’s ultrafast fashion—and it’s expanding.

An article on The Business of Fashion website says that while Shein did not manage to acquire the British brand Topshop (United Kingdom’s Asos did), it may get struggling online retailers such as UK’s Boohoo and US’ Fashion Nova “to cement its position as China’s leading exporter of ultrafast fashion with global ambitions.” Shein now also carries homeware (cutlery, quilts), cosmetics and skin care, even pet supplies.‘Pasabuy’ market

Search for #SheinHaul on TikTok (or any social media, really) to find vibrant millennial and Gen Z influencers from around the world with their prized fashion finds. Shein.com says the brand with millions of followers “mainly targets Europe, America, Australia and the Middle East,” and is available in “220 countries and regions”—a profitable win for an opaque brand with no press information or a physical store. In Manila, Shein has a negligible official store on Shopee with a few items. The transactions happen in buy-and-sell Facebook groups such as Shein Retail and Wholesale Philippines, Shein Direct Importer and Shein Pasabuy with hundreds of thousands of members, so much more than the official Shein Philippines account with just 22,000 followers. Shein pieces are then sold online by resellers, mostly in popular “live selling” events.

Shein may be shady, but it’s selling because it’s trendy and cheap, and for this writer, there’s the third factor: size inclusivity. It’s plus-size category, Shein Curve, extends all the way to 5XL, which offers options to bigger women like me who have been snubbed by better brands. I gave in and bought Shein items—black crop top, lilac co-ords, pompom poncho—fun clothes that not even my big-size Shopee suki sells. I know of Shein’s reputation for bad fit and flimsy clothes that look good only in photos, but they were affordable and came in 2XL.The Shein website was overwhelming. It was like an endless tiangge where everything was on sale—but with actual styling. The cheapest item was a P99 rib-knit halter cami available in candy colors. I went into the black hole of “daily 1,000-plus styles” and found a nice utility trench coat in “premium cotton” from the fancier MOTF line, which is Shein’s attempt to offer chic staples in “sustainable fabrics.”

Its website has a Social Responsibility tab, where it says the company produces only 50 to 100 pieces of a new product and only goes into large-scale production when a style is in high demand. On its main page, however, it says new daily arrivals are “1,000+ styles.” So do the math.

Ethical issuesShein has been under fire not just for selling gold swastika pendants and passing off Muslim prayer mats as rugs, but for the looming long-term environmental damage of its mass-produced stuff, which quarantined women who have nowhere to go were buying during the pandemic.

As an article on The Atlantic put it, “In times of crisis, consumers don’t stop shopping—they just limit their purchases to affordable pleasures.”

Shein celebrity collaborators have been slammed, too. Reality show star Khloé Kardashian leads the panel of judges in the ongoing Shein X 100K Design Competition that, she said on an IG post, “gives talented fashion designers the ability to design a collection for Shein that will be seen by fashionistas all around the world!”

According to Daily Mail Online, “Siriano announced that his team was deleting negative comments, Roach tasked his fans to give the show a chance . . . Lyons said she was also considering taking down negative comments out of respect for the young designers she met.”

Kardashian, well, hasn’t replied, even with so many comments literally saying “no, girl.” User @theoliviaphillips said, “They steal designs, Khloé. Please don’t promote them.” User @emilyebracey claimed, “Shein is one of the most unethical fast-fashion brands,” while @hayxbail said “Fast fashion is bad for the environment—not cute.”

On Twitter, Elexiay, “a group of female artisans making cool handmade pieces,” accused Shein of stealing the design of its crocheted Amelia pastel sweater. And it’s just one of the brands claiming Shein ripped them off, so it’s kind of ominous that Shein wants young designers on its team. But for a struggling brand, the clout from winning and the cash prize could go a long way.

Fashion watchdog Diet Prada posted on IG: “Sometimes it makes you wonder if there’s like a cartoon supervillian running some of these companies. @sheinofficial . . . [is] making direct copies of @maisoncleo’s handmade blouses for less than the price of a takeout lunch.”

But Shein doesn’t seem to care. I mean, it’s selling a statement hoodie with “Original” stamped on it, similar to the iconic red box logo of Supreme streetwear.

My Shein Curve orders arrived in individually packed zip pouches, and the sizing was fine but, as expected, the quality sucks. It’s almost disposable, and I have better garments from Taytay manufacturers.

Shein is that ubiquitous junk food I’ve been curious about: I know it’s bad for me, but I got it anyway because it would be satisfying. The proper thing to do would

be to support small shops

like Glorious Dias (gloriousdias.com) that produce one-offs from reworked vintage pieces, and check if thte infinity Mood Dress can fit me. Aguillon said locally woven textiles will be used for the next batches, which—fingers crossed—guarantees no duplicates in at least 200 countries. INQ