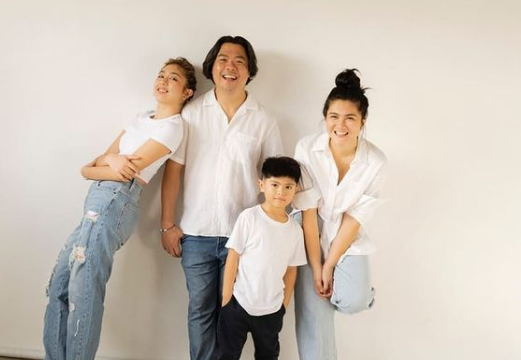 According to actress and businesswoman Dimples Romana, her character Faith in the TV series “Huwag Kang Mangamba” reminds her of a promise she made in her own life.

Romana’s character already died in the story, but she still remembers its value to her. She spoke about this as she shared a series of professional portraits of her family – husband Boyet, daughter Callie and son Alonzo – in her Instagram page today, Aug. 29.

“Sa #HuwagKangMangamba that’s my role’s name and FAITH is also one of my personal driving forces in all that I do. All my life I feel like I have been walking with no certainty and my only guiding light is PRAYER,” she said. “Sabi nga FAITH daw (It is said that faith) is like taking the first step without seeing the whole staircase.”

Romana recalled that when she was given the script for “Huwag Kang Mangamba,” she had goosebumps. She said that both she and Faith swore to God that they would offer their children to Him, to honor and glorify him.

“I CANT HELP BUT FEEL SO BLESSED to have such wonderful daily celebration of LIFE in its purest form, FAMILY,” she said.

Then she dropped a question which might intrigue some about her character resurrecting: “[Now] the question is BALIK NA BA AKO HUWAG KANG MANGAMBA? AT KUNG BABALIK MAN AKO ANO NGA KAYA ANG MAGANDANG KWENTO?”

(Now the question is should should I already return to “Huwag Kang Mangamba”? And should I return, what could be a good story for it?)

Perhaps fans of Romana and the show just need to keep the faith if they do want Faith to return. JB

Dimples Romana on giving away produce from farms: ‘It’s a form of our love’