The ‘aspins’ who changed our lives | Inquirer Lifestyle ❮ ❯ 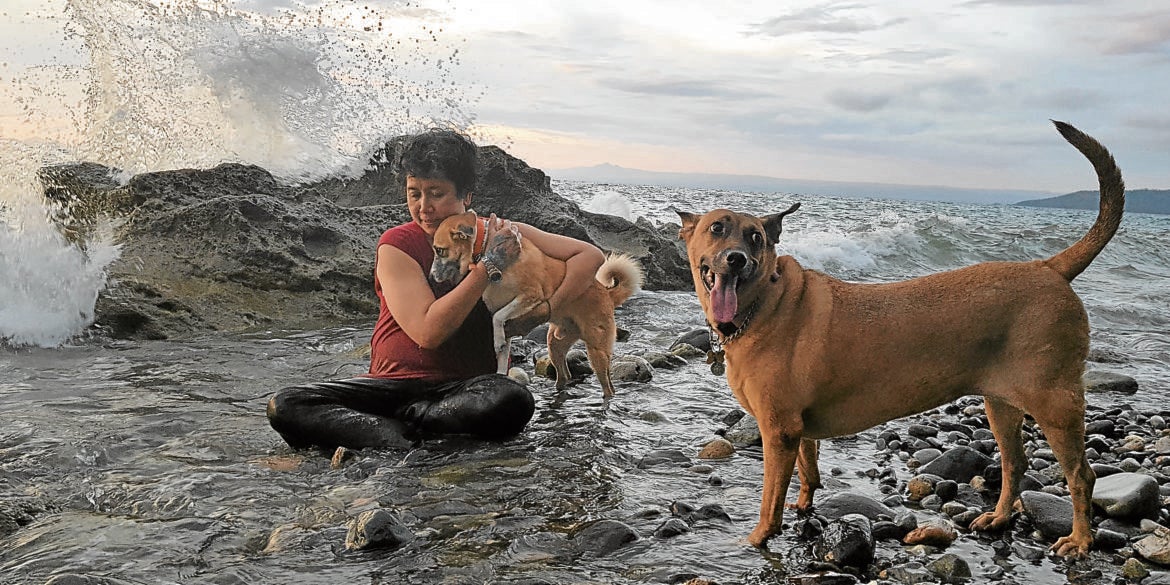 The author in Anilao, Batangas, with her “aspins” Kiko (in her arms) and Kikay, 2019 —IAN ULPINDO

The ‘aspins’ who changed our lives

As PAWS and animal welfare advocates mark the very first National Aspin Day, ‘aspin’ owners talk about beloved pets who made a difference

As I write this, I am nursing a Category III dog bite (Category III: single or multiple bites or scratches on broken skin, contamination with saliva) on my right inner ankle, right above the bone, and it hurts enough for me to limp and require a cane to waddle along. It’s not my first, although this is the worst one I’ve had in my years as a dog owner.

Naturally, some folks have questioned why my dog bit me; my Frankie is an animal, after all, and I stupidly tried to break up an earnest dog fight between her and her sister, Kikay, with my foot, so it’s 100-percent my fault.

What riled me, however, was this reaction: “Ayan! Askal kasi!” Read: That’s what you get for thinking a street dog will be as trustworthy and gentle as dogs of a certain breed or pedigree, or as Filipinos like to say in misplaced admiration, “yung may lahi.” Once more, the poor Philippine askal’s inferior reputation has come to the fore. Never mind that several years ago, Philippine Animal Welfare Society (PAWS) made a conscious effort to replace the label and its negative connotations—filthy, fierce, socially awkward—with the more edifying “aspin,” for “asong Pinoy.” Avowed aspin lovers like myself need no convincing of the value of this much-maligned breed, however. They’re the ones who often end up kicked or beaten, or as pulutan during caveman drinking sessions—just ask the advocates of Animal Kingdom Foundation (AKF), from whom I adopted Frankie, and who are still swooping down on dog meat traders.

Thus, when PAWS recently declared Aug. 18 as National Aspin Day, with an online event taking place tomorrow, Aug. 30, it was a perfect time to pay tribute, and hope that our infamous colonial mentality ceases to extend even to our choice of pets.

I am a proud “mother” of three aspins. Kikay (named after St. Francis of Assisi, patron of animals) is an estimated 12 years old now. I picked her up in 2009, a mangy puppy with a bloated stomach, almost dying at my gate. She was my first aspin, who opened my eyes to the beauty of this breed.

“Aspins are as trainable as any dog,” dog behaviorist and trainer Jojo Isorena told me once in an interview; he gave Kikay lessons on basic obedience. “It’s just that many aspins have a higher level of fear or shyness. I feel it’s genetic evolution; the friendlier dogs that approached humans readily were the ones that got eaten, because they were easy to catch.”

Thus, Kikay bloomed (after first giving me scabies, and under the loving eye of her ate Banana, my older dog then), but was also initially wary, easily frightened, and fiercely protective—as that other generalization goes, “Ay, matapang!” It took about eight months before she allowed me to give her a big hug. She was banned from large family gatherings, but was always, always respectful of me and my late mother, who adored her. She was also my quiet, steadfast companion when I fought cancer in 2013; I had to insist on keeping her in my bedroom when my doctors wanted her evicted.

In 2016, my friend Nice Rodriguez (more on her later) picked up five puppies dumped under a car on the streets of Sta. Ana, Manila, and she named them after the presidential candidates at the time. I asked for a male, and in June, she gifted me with Kiko (formerly Nognog—and also named after St. Francis), already healed from the mange that rescues often come with. Kiko also bit me on the hand in his early adult days—again, out of fear, defending his turf when I tried to drag him out of his hiding place. Today, he is my chunky unico hijo who shares my pillow.

In May 2020, three months after my mother’s passing, I opted to adopt a third aspin to help me manage my grief. I asked AKF to find me a puppy, and they rescued black beauty Frankie (yup) from Taal, Batangas, where she was abandoned during the volcanic eruption. Thus, my pandemic baby came with some skin problems, infections, and again, a lot of distrust. It’s been 15 months, however, and I can now brush her teeth without her scampering away in fear.

Like many female dogs, Frankie and Kikay have fought a few times, and it’s my job to make sure they know that’s unacceptable. All is forgiven, though, despite more rabies and tetanus shots for me, and in these challenging lockdown days, I am happiest lying in bed surrounded by three warm, fat, furry, snoring dogs.

Nice, a retired artist formerly based in Toronto, Canada, says she has “only” 14 dogs now. “They’re all mixed breeds or aspins, mostly rescued. Many of them I just found around my neighborhood.”

The one who started it all and changed the course of her life, however, was Poypoy. “I unintentionally rescued him in 2005 when I returned, supposedly on an art break from Canada. I didn’t plan to get him since I was a balikbayan, but I got stuck with him. His real owner, who gave him his name, threw him out because he was sick. I found him outside my gate. I nursed him a bit, but he wouldn’t leave after that. He cut his leg trying to get inside my screen door. It required surgery, and I had to list myself as his owner at the vet. He became mine from thereon.” In short, Nice never went back to Canada.

Jojo also trained Poypoy, and the results were impressive. “Poypoy was very smart, and a fast learner, too,” Nice says.

Poypoy could understand instructions in English and Filipino, and could do many tricks; he won third place in a national frisbee event, topped a dog race, and eventually became a Dr. Dog, a therapy dog, for PAWS, performing tricks to entertain sick children.

“Most of all, he is my companion,” Nice says of her now senior citizen pet. “He went with me all over. He rode tricycles, jeepneys, bicycles and even a calesa with me. We went to rallies, talipapa and malls. He likes people. Many rescued dogs are traumatized. Poypoy was scared of cars, so when we did our walks, he avoided anything with wheels. That improved a bit with training.”

Aspins are great home companions for Nice. “They just blend right in with my domestic affairs—waking, working, reading, watching, eating, cleaning, cooking and sleeping. They follow me around or do their own thing. I never feel alone. They know when I get annoyed. I also feel very safe with them. They’re sturdy and low-maintenance. I cook for them daily, and they’re not picky eaters. What I love the most: aspins don’t smell. With minimal care, they still look and smell clean. Unbelievable.”

Mitzi Cruz, a businesswoman and active PAWS volunteer who has put up a shelter for senior dogs, counts nine aspins in her pack of 15 dogs. “I’ve been an aspin owner only since 2019; I only had poodles before that.”

She sees no difference between breeds now, Mitzi says. “Aspins are just as capable of affection. They behave and communicate the same way, can learn the same tricks. However, I find aspins more hardy and low-maintenance because of how they’re built, unlike other breeds that need more grooming or are prone to ailments.”

Their best trait, however, is loyalty, Mitzi says. “It’s probably why Pinoys designated them as ‘bantay’ in the first place. They will protect your family and your home. They have the ability to endure difficult conditions. In fact, the challenges of owning an aspin have nothing to do with the breed, but with people’s perception of them.”

Aspin advocates call out this glaring inequity, where aspins live outside, while imported breeds get to stay in the master’s bedroom, with their own beds. Native dogs eat scraps or lower-quality food and visit the vet only when they’re sick or dying, simply because they’re “aspin lang naman.”

“Things have improved, but some business establishments still discriminate against them,” Mitzi adds. “Visitors fear my aspins, but think nothing of my poodle, who actually attacks!”

The aspin that Mitzi remembers most is her first, Howie. “He was known at the shelter as the saddest dog, but I swear, from the very first day I took him in to his final days, he always had a smile on his face. It had seemed like he was just waiting to die, but seeing the instant change in him changed my outlook completely.”

Howie has crossed the Rainbow Bridge, but now, two years later, in the sanctuary Mitzi is building, the enclosure is called Howie’s House, “in memory of the dog that started it all.”

PAWS’ National Aspin Day online event takes place tomorrow at 4 p.m. (facebook.com/pawsphilippines), and will feature winners of a meme contest, a “Dress Your Aspin Contest” (in Filipiniana!), and a video of aspins and their owners, as the organization launches “An Aspin’s Song,” written and performed by my niece Barbie Almalbis-Honasan (with lyrics I contributed). It’s a song we first came up with to honor the late, much-missed founder of PAWS, Nita “Tata” Hontiveros-Lichauco, who passed away in October last year.

I have absolutely nothing against dogs of specific breeds and pedigrees; my beloved heart dog Banana was a yellow Labrador retriever, who died in 2011, and who I miss to this very day. While dog owners are different—from some owners of means who don’t really care about their animals, to the very poor for whom dogs are family—I am of the opinion that all dogs share the same big, beautiful heart, regardless of breed.

Hindi, ganon din ’yon. And the sooner we realize how wonderful our very own native dogs are, the sooner we can end such crimes as animal abuse, neglect, and the terrible dog meat trade, and treat aspins with all the love they deserve.