The year was 1981, the place, a busy street in the bustling metropolis—McDonald’s famed Golden Arches first went up over the Morayta horizon, to the excitement of people looking for a quick, filling, affordable, yet palate-pleasing meal. As expected, it was filled with customers on opening day. Shortly after, a second branch was born in the New Frontier Theater in Cubao. Soon enough, the arches were rising all across the metro, raising the standards of the quick service industry along with them. By 1992, the renowned quick service restaurant (QSR) chain had made its way to the Visayas and Mindanao regions of the country. The rest, at they say, is history.

But the arches did not raise themselves, nor did the industry benchmark of quality become higher on its own. The man behind the movement was Dr. George T. Yang, pioneer, entrepreneur, and tycoon like few others.

As Chairman, Founder, and Master Franchise Holder of McDonald’s Philippines, Dr. Yang committed to building a strong franchise and expanding McDonald’s presence nationwide. But, he dedicated himself to so much more than that—he championed and pioneered youth employability in the country by hiring students as regular part-time restaurant staff. To date, McDonald’s Philippines still maintains a steady roster of working students who are regular employees, with full government-mandated benefits—enabling them to support their education. Guided by Dr. Yang’s vision, Mc Donald’s Philippines continued with youth employability programs, an example of which is the Work Immersion Program (WIP). Through the partnership with various LGUs, WIP helps prepare senior high school students in their respective cities for employment opportunities.  The company has also partnered with the DOLE and PESO for SPES (Special Program for Employment of Students), providing employment opportunities to underprivileged students. 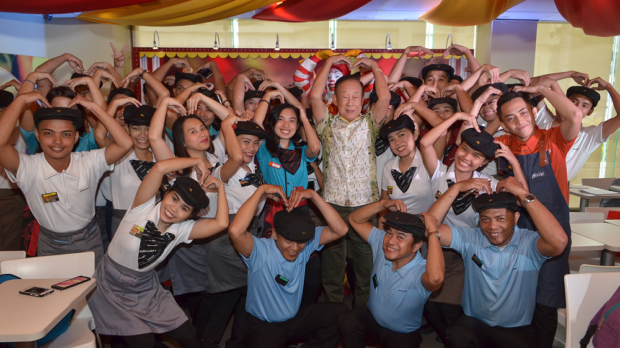 But Dr. Yang’s unwavering goal to give every Filipino a chance at becoming productive members of society does not stop with the youth sector. Through its Alternative Workforce Program, McDonald’s Philippines hires senior citizens and differently-abled individuals in a number of its branches pre pandemic.

Dr. Yang’s passion and his pioneering push have had tangible effects in the lives of people across the nation. With over 650 stores throughout the archipelago—an incredible stretch from Dr. Yang’s initial commitment to the US franchise holders to open 10 branches in the country—McDonald’s Philippines currently employs more than 40,000 Filipinos. Best of all, the company has been wholly Filipino-owned since 2005; again, thanks to Dr. Yang’s ceaseless efforts, with 51% of the stores owned and operated by Dr. Yang’s Golden Arches Development Corporation, and 49% by independent franchisees.

With his finger on the pulse of Filipino culture and an innate understanding of what pleases the Pinoy palate, Dr. Yang initiated some welcome tweaks and additions to McDonald’s local menu. In 1986, everyone’s favorite sweetish Filipino-style McSpaghetti made its delicious debut. The well-loved crispy and flaky golden-brown Chicken McDo was introduced in 1987, and the appetizing, savory Burger McDo came out in 1993.

McDonald’s Philippines also launched a number of groundbreaking “firsts” to elevate customer experience and convenience.  Among these, the first Drive-thru store (in Greenhills) in 1982; 8-MCDO, the first 1-number delivery system, in 2002; the first 24-hour restaurant branch (in Makati) in 2004, followed shortly by its 24/7 delivery service in 2005; the McDo PH app for mobile users in 2019; the NXTGEN store experience (with features like self-ordering kiosks, modernized menu boards, cashless modes of payment, split counter system, and specially trained Guest Experience Leaders) in 2018, as well; and most recently, launched Bike & Dine—an initiative that makes dining out at McDonald’s all the more easy and convenient for bikers.

And, in the midst of a pandemic, the ability to innovate has never been more important.  With its “M Safe” campaign firmly in place, the company reiterates its commitment to the health and safety of its customers, as well as its team. Stringent safety standards, mass testing and vaccination of its employees, and programs that promote vaccine confidence are just some of the solid strides McDonald’s Philippines continues to take, in the midst of herculean challenges.

Beyond his penchant for pioneering and innovating, Dr. Yang is a spirited entrepreneur with a big heart; and this is evidenced in the many charitable causes he has helped to spearhead. There’s Ronald McDonald House Charities (RMHC), McDonald’s Philippines’ charity of choice, which started in the country in 1996, with its flagship campaign, Ronald McDonald Read to Learn. The company likewise founded the Ronald McDonald BigayTulong program, which provides disaster relief and aids families in affected areas, in times of calamity. 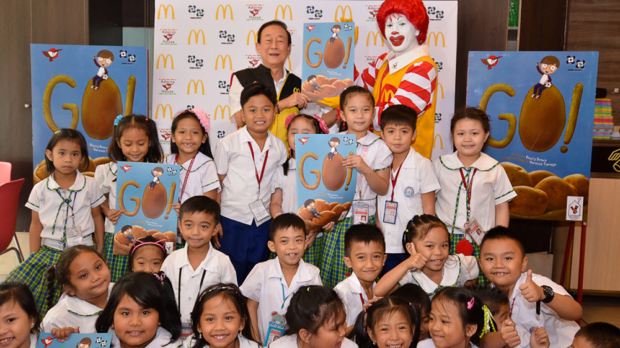 Given Dr. Yang’s unfaltering fealty to the youth of the nation, the company also launched a program to facilitate early childhood development in its Ronald McDonald Bahay Bulilit Learning Centers. The active learning facilities, now numbering 36 across the nation, prepare younger children from marginalized communities for formal schooling.

In the middle of the pandemic landscape, RMHC has also come to the aid of the country’s frontliners, as well as sectors of society that have been hardest-hit by the crisis. Through its McDonald’s Kindness Kitchen (MKK) movement, the company has served over 510,000 meals to frontline teams and marginalized families—and the mission continues.

For his razor-sharp business acumen as well as his unwavering sense of principle, one might call Dr. Yang a “tycoon’s tycoon.” His example is, indeed, one to emulate. Plus, his talents are not just in the realm of business.

Fondly dubbed as “The Singing Tycoon”, his deep love for music has led him to pursue a collaboration with close friend and iconic singer Jose Mari Chan for a McDonald’s commercial. Apart from him, Dr. Yang has also worked with famous Filipino artists in the past, such as Raul Sunico, Raul Navarro, Lily Monteverde, and Gerard Salonga. Further embracing his artistic capabilities, he even produced his own recordings, Yang at Heart, Forever Yang, and The Night is Yang.

Believing that “you’re never too old to live your dreams,” Dr. Yang fulfilled a lifelong ambition to perform at the CCP in November 2018, when he staged Yang Klassics Concert. In preparation, he took singing lessons with no less than acclaimed Filipina Soprano, Rachelle Gerodias.

Dr. Yang’s fervor for music, especially the classical genre, has also moved him to establish the Klassikal Music Foundation (KMF), which has supported 60 talented Filipino classical singers pursuing their education in music since its founding in 2007.

What’s next, then, for Dr. George T. Yang?  Beyond the glow of the golden arches, only time will tell, as the adage goes. But, with his talent, track record, and tenacity, proven out many times over, the answer will certainly be as invigorating as it is inspiring.