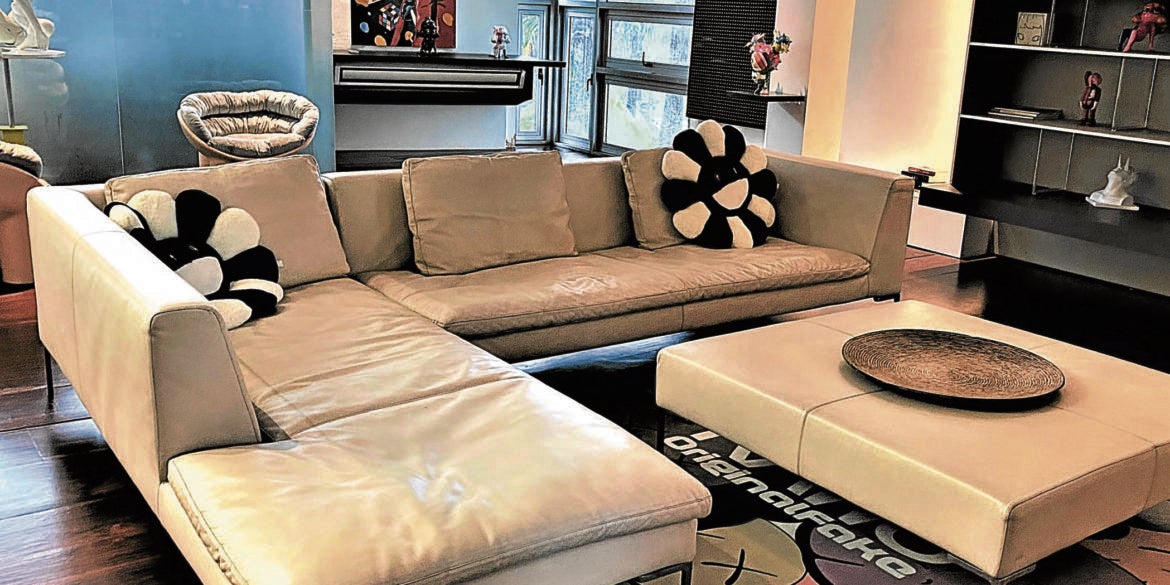 The unique structure—one of the four homes on the same street designed by the Calma family—is the result of family collaborations. At the turn of the millennium, contractor Pablo Calma acquired this corner property in a Makati village from designer Budji Layug. In 1998, Pablo tapped his nephew, architect Eduardo “Ed” Calma, to give it a face-lift.

The brick façade is given a contemporary touch by the composition of planes and the contrast of metal works on the eaves and posts. From a distance, the slender metal lines frame the entrance.

“It’s all brick outside, but the view from the inside is nice,” says Ed.

The bricks shroud the house with privacy while the views from the glass walls are oriented toward the newly installed deck and pool, and landscape.

Ed points out that the house is the only Philippine entry in the “Phaidon Atlas of Contemporary World Architecture,” a review of exceptional examples of contemporary structures around the globe.

Before the pandemic, Pablo and his wife had moved out. His son, Jose Paolo, a general contractor, daughter-in-law Ciane (pronounced sha-nee) and two grandchildren became the new occupants.

The three-level house consists of the bar, lanai, poolside and service area on the ground floor, the living, dining and TV areas on the second floor, and the loft and bedrooms on the third level.

One of Ed’s interesting treatments is a series of metallic perpendicular lines that creates a tunnel-like effect over the stairwell leading to the loft.

Another characteristic of Ed’s designs is a room that juts out from an angle at the top floor, lightened by expanses of glass facing the lower floor and the surrounding views. That room has been converted into Ciane’s office where she does her digital art and animation. (Her sculpture studio is in Poblacion.)

In the remodeling, beautiful finishes such as the red narra and tindalo on the flooring, and oak veneer walls were polished. The silver metalworks on the façade were painted rust to complement the patina of the bricks.

Ciane’s artistic trademarks are injected into the house. Coming from the body-conscious modeling world, she sculpts women’s figures, characterized by distortions and rabbit’s ears, and paints faces with streaks. Dangling from the eave at the entrance, a resin sculpture of a naked woman is slumped over a piece of fabric, suggestive of the world on the verge of collapse.

“That’s the mood of our times. Society is hanging on,” says Ciane.

Carlo designed the recessed ceiling above the bar area which is defined by a woman’s silhouette with cutouts of mutilated body parts.

He likewise designed the bar table with a marble top and a wooden base of Ciane’s signature female form. The table makes a strong statement in the living room. The artist’s grotesquely beautiful figurative sculptures are displayed around the house alongside those of other artists.

Like a gallery, the artists are curated according to the similarity of themes and styles: vibrant colors, cartoon-like images and subjects with ambiguous expressions. The collection runs the gamut of viewpoints from such young artists as Yonson Culibrina’s spirited imagery, Yeo Kaa’s animated sculptures and the anime style of TRNZ (Terence) to established artist Lynyrd Paras’ moody painting and American artists Kaws (Brian Donnelly) and Ron English whose images are subversions of cartoon characters and comics.

These works connect with Ciane’s colorful works with themes of body shaming and enigmatic emotions.

The powerful artworks complement the contemporary classic lines of the Italian furniture and a vintage coffee table and chair by Ed’s father, modernist architect-designer Lorenzo Calma.

The most revealing vignette is a corner by the window which displays Ciane’s white resin sculpture of a crouching woman with rabbit ears, flanked by two Roly Poly armchairs. Touted as an iconic design of the 2010s, this sculptural squat chair with soft edges, created by British designer Faye Toogood, enjoys a cult following. Vogue magazine described the Roly Poly chair as a “childlike, nonconforming contemporary design” imbued with joie de vivre. These adjectives echo Ciane’s spirited nature and art.

Ciane traveled to many countries, including the Philippines, for commercial modeling work. After quitting modeling, she took up interior design here. To satisfy the urge to create serious art, she taught herself to paint, sculpt and use computer animation and virtual reality art to produce mesmerizing experiential art exhibits.

The newly remodeled home/gallery has not only become a place to connect with family but it also allows her to push the boundaries of her art making.