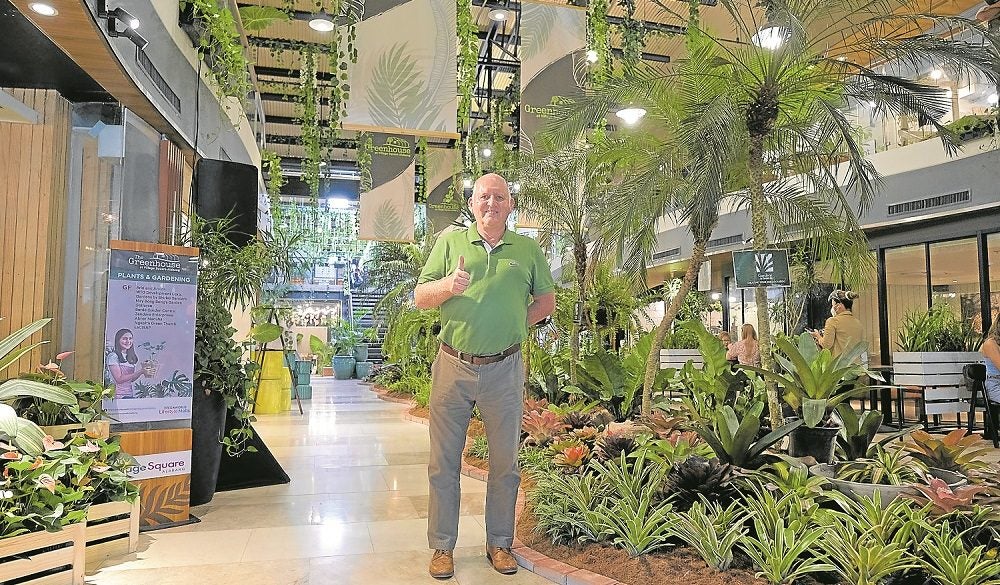 Everything you need for gardening is here. Greenhouse at Village Square Alabang is PH’s first plant sanctuary mall and home to a wide array of plant varieties, gardening tools and supplies.

Way before it was considered cool to be into gardening, like it is now, Graham Coates was sinking his fingers into topsoil and coaxing new life from tiny seedlings. His childhood in England was a combination of schoolwork, chores, and hanging out with friends. Before he could indulge in the last one, however, he had to finish all the household tasks expected of him.

“My father had a very large garden, a couple of acres. When I wasn’t in school and during the evenings, I would take care of the garden. That’s how I earned my allowance. At the time, I was only thinking about the spending money,” Coates, now head of Megaworld Lifestyle Malls, told Lifestyle in an online interview.

“We had a big natural fishpond and I remember doing a lot of natural landscaping along the edges. Doing that needed a certain level of creativity.”

He admitted that he didn’t like gardening at first—what teenager does?— but grew to enjoy it. On weekends, his father would check on his progress and grade his gardening skills.

“He was quite strict in that way but he also gave me free rein.” Coates eventually began to look forward to the physicality of the task. It became a lifelong hobby of his, one that has resulted in lush gardens wherever he has lived since then, including in Hong Kong, Indonesia, Barbados and Singapore.

In the Batangas home he shares with his family, there are three fish ponds with ornamental fish surrounded by shrubs and assorted tropical plants. When it comes to his plants, he also prefers them to be ornamental.

“I am not someone who will grow vegetables. I always say I can just go to the supermarket for that,” he said.

In his native England, Coates grew masses of dahlias as well as flower bulbs like daffodils and tulips. He and his wife now miss the flowering baskets that could be found almost everywhere. Since these flowers only thrive in temperate countries, he had to learn which ones grew well in the tropics. He’s had 30-odd years to do that and now knows what works and what he likes.

His favorite so far? The prolific bougainvillea plants, some of which he propagated to grow in seven different colors. The showy shrubs are very hardy and require little or no special care. They also thrive near the seaside where he lives.

“That’s why I like them. The more you neglect them, the better they grow. They really love the environment. The only problem is when there’s a storm like the one we just had. The flowers are blown off, but give them a few months and they’ll be back. It’s really a plant for the times.”

His passion for gardening has largely inspired Megaworld Lifestyle Malls’ newest project, Greenhouse at Village Square Alabang.  The 12,000-sqm mall with a tenant mix consisting of stores offering a wide range of plants and gardening needs has been open for two months now.

“This really used to be a traditional mall, but the pandemic has rewritten the book on malling,” Coates said in an earlier interview. “Now, it’s a ‍one-stop shop for all your gardening needs. Eighty percent of what you’ll see here are our plant and gardening tenants.”

There are now around 2,000 different varieties of endemic plants in the mall. Customers can mix and match different types of plants to create a hanging basket if they are so inclined.

“That’s one of the nice things about the Greenhouse. People can go there for expert advice but, of course, you have to take care of the plants afterwards,” Coates said. Whether you’re starting with a blank canvas or already have a concept in mind (minimalist Japanese, manicured French or lush English style), there are experts at the venue to give suggestions and clarity to your garden concept.

The Greenhouse is just the first phase of a larger concept that includes putting in a skylight styled after the one found in London’s Covent Garden. There will also be an al fresco dining area where people can cross order from several dining establishments.

“I used to be regarded as boring, my hobbies were boring. Now I’m known as Plantito Graham (IG: @plantitograham). It’s kind of nice to be cool now,” Coates said.

“Gardening used to be a secluded hobby, something I didn’t talk about very much, but now during this pandemic so many people have navigated toward gardening—whether it’s a few plants on their balcony or in their office space. They’ve got their plants to keep them happy.”