The first volume of ‘Endangered Splendor’ is not a eulogy for what was lost; it tells us about the architecture and the people behind it, and what happens to it now 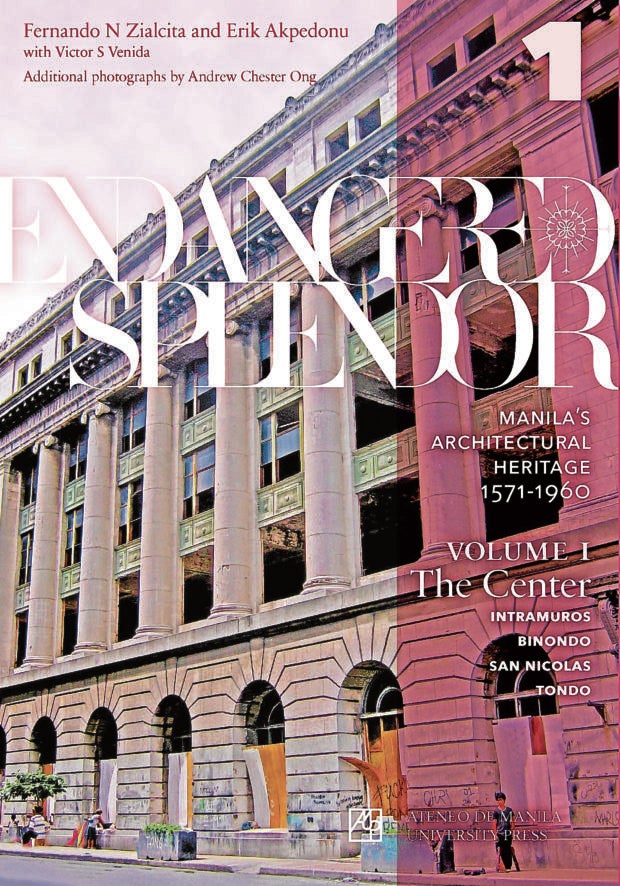 Manila. There is no city on our shores with more stories to tell, that has so much to say about who we are as a people. Our story is writ large on the monuments, edifices, even in the very names: Binondo Church, Rizal Park, Jones Bridge. To live in the city is to be immersed in a history that one can still see, hear, feel.

As with other cities that embody their country’s past, Manila’s architecture should be preserved—this is unassailable. But what exactly is it that we want to preserve?

This is what “Endangered Splendor” (Ateneo de Manila University Press, Quezon City, 2021), a series of three books, answers in great written and photographic detail. As the introduction to the series (“The Center, The South, and The North”) says, “Despite the devastations of World War II, significant examples of Manila’s architectural heritage from the Spanish, American and early Independence periods did survive. Baroque, Neo-Gothic, Neoclassical, Bauhaus structures along with graceful Wood-and-Stone houses can still be admired.”

But these are not coffee-table books written to make the reader admire. The authors are Dr. Fernando Nakpil Zialcita, philosopher and cultural anthropologist, and Erik Akpedonu, art and architecture teacher, both of whom teach at Ateneo. They aim to educate. Fifteen years of painstaking fieldwork and research—a cultural inventory—by heritage conservation professionals and advocates went into this series, with the goal of enjoining the public sector to join its advocacy. It hopes to convert.

Book 1, “The Center,” presents Intramuros, the Mother City; Binondo, setting of Galleon Trade transactions and our historical trade center; San Nicolas, central to both the Propaganda Movement and the Revolution of 1896; and Tondo, one of the oldest settlements in our islands and home to heroes, poets and artists.

Each section begins with a historical and sociological essay, then proceeds to take the reader through the area street by street, building by building. There are many fascinating stories on who put up the structure, what business that family was in, what’s housed in it now. The names attached to the buildings are often recognizable, being the surnames of Manila’s oldest families. (Was your name on a Manila building a source of pride, a mark of quality, or simply easier to recall?)

There’s an equally fascinating claim of Manila being the first global city.

“Rome under the Caesars, Beijing under the Mongols and Malacca under the Sultans … did not yet include the Americas. In contrast, during the 1600’s economic, social and cultural currents from the four continents finally converged in Manila, from which they fanned out to other countries.”

There should be evidence of this in the (under construction) Manila-Acapulco Galleon Museum: We should see not only the influence of other countries on us but our effect on them, as well.

Included in all four sections is a chapter that answers an important question: “What economic activities can be initiated in a locality that will generate more quality jobs while at the same time protect heritage?” Answers are provided by Dr. Victor Venida, an economist with a profound interest in cultural issues.

Walking tours with historical markers, riverbank promenade restaurants and an IT-outsourcing hub near the universities are some of the thought-provoking “what if” contributions. There are also heritage preservation examples found in other countries that are discussed by Akpedonu, with photos and historical detail. All these make it easier to imagine—and believe in—a Manila with some of its old splendor returned.

“Splendor” is the appropriate word for images of Manila’s grand old homes, churches, schools and bridges. The original Jones Bridge had “three graceful arches … for many, it recalled Paris’ Pont Alexandre III.”

In describing the buildings that remain alive today, “dignified” is a word often used in the book. Some of its most beautiful photos are of Escolta buildings, with Beaux-Arts architecture and neo-Renaissance arches. (It’s comforting to know that you can still visit them today.)

The photos may be of old and sometimes garish buildings, but it’s easy to imagine how beautiful they once were. And if you are a Manileño of a certain age, you will remember how they actually looked. This is a book sure to bring fading memories to life.

“Sadly” is another word that echoes throughout. There’s a sense of helplessness in the face of blatant disregard for cultural preservation (in a shopping mall developer’s words, “You can’t eat heritage”). The book has numerous photos of structures that have already disappeared: What the cultural inventory started to describe had changed by the time it was done, a mere 15 years later.

That Manila has changed so drastically is not because of the bombing during World War II. Many structures, being made of stone, actually survived. Beyond the walls of Intramuros, homes and buildings remained intact, only to be allowed to decay and be demolished bit by bit in the name of “modernity.”

Manila’s magnificent churches have been renovated repeatedly to ugliness, her proud buildings grown old and forgotten, her streets renamed with no thought to history. To be caught in the crossfire of war is cause for regret, but many cities have been reborn from similar ashes. To suffer indignity after indignity wrought by the unthinking and the uncaring—how does a city recover from that? By helping its citizens remember.

“Endangered Splendor” is not a eulogy for what was lost. It is, as the preface states, an urban novel or “city novella.” A novel is prose that deals with the human experience. And what this series does best is humanize the city.

We come to know both the architecture and the people behind it. Why people built their houses the way they did, why families maintained their buildings or neglected them, why citizens remained or abandoned the city.

We come to care about Manila and what happens to it now. That’s the genius of this series, highly recommended to those who love—or want to love—Manila. —CONTRIBUTED