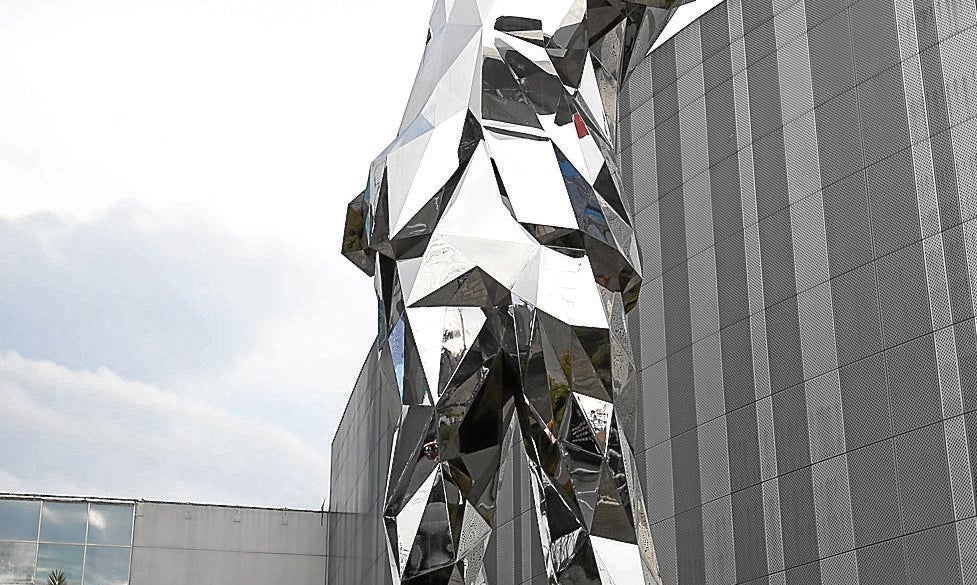 If ever there was a place where time stands still, it must be on Edsa—during rush hour on a rainy weekday, the shopping frenzy a few days before Christmas, on the international date night that is Valentine’s Day and definitely in front of SM Megamall.

The shiny 12-meter “Time” statue of an anthropomorphic figure in a suit makes for an imposing sight before one of the biggest and busiest malls in the country situated in Mandaluyong City’s business district.

The figure has a box for a head and it looks at its watch—a reminder that time is fleeting and thus must be spent wisely, according to Filipino American public artist Jefre Manuel Figueras, or Jefrë.

The “Time” statue was originally a 3-meter-high stainless steel sculpture that makes up Jefrë’s “Baks” (the phonetic spelling of “box”) series, a collection of works that includes “Faith,” “Peace” and “Love.” For Jefrë, these human emotions and concepts are the essence of a city.

“If you look at the beginning of this, you can see that things like ‘Passion’ and ‘Empowerment’ and ‘Love’ and ‘Time,’ these are all the things that make a great city. And the heads are essentially substitutes for building forms. That’s why these were box heads. But if you put them all on a horizon line, it is sort of my definition of what makes a great city,” Jefrë told Lifestyle in an online interview.

The Sy family picked “Time” out of the lot displayed at the artist’s solo exhibition in Orlando Museum of Art in Florida.

SM said in a statement that “Time” is also a tribute to its late founder, Henry Sy Sr., who made the most out of his time. Inscribed on a plate placed under the statue is the late tycoon’s quote: “There are countless dreams to pursue. Only your willingness to work, your imagination and TIME can limit the ways.”

“Out of all the sculptures, in terms of the different emotions, ‘Time’ was something that really resonated with them, especially with the location,” the artist said.

“Time” is made of mirror stainless steel, and its body is connected by polyhedrons that create complex three-dimensional planes. It’s the gleaming exterior of “Time” that allows the sculpture to mirror its surroundings—the traffic, the buildings, pedestrians, cars and even the Metro Rail Transit.

“The beauty about this material in this work is that at night, when it rains, when it doesn’t rain, when it’s sunny, it looks different every time,” Jefrë said.

“In my work here at SM, you know, the reflection is really reflecting not only their traffic, but the people, the weather. I think this is what the sculpture does, it actually reflects the daily life of the Philippines.”

Interestingly, when the statue was unveiled in late July, some social media users had their own interpretation of the public artwork. The statue’s position of looking at his watch reminded many commuters and motorists of how much time they spend in gridlock and commute.

According to Patrick Flores, an art critic and fine arts professor at the University of the Philippines Diliman, this varied perspective on public art, in some way, means that that piece is working because “it invites a spectrum of intuitions.”

“This is what art does: to stir up the imagination as a basis of a robust personal responsibility and social engagement. It is likewise important to note of the public’s attentiveness and their ability to articulate what they think the form they sense means, or if it is any good, in a sea of distractions amid stalled or hectic traffic. I guess the truth of the statue is in the public that makes decisions about what matters to them,” Flores said.

Public art comes in varying sizes and materials, but what makes one is that it is created for the general population. According to Flores, these visual works in accessible spaces have the potential to draw in people from different walks of life. They can share their ideas and interpretations of the work without the control of institutions.

Landmarks, statues and other works of art for the public also contribute to its environment. Jefrë said that the skylines of cities like Paris and London would be unrecognizable if it weren’t for structures like the Eiffel Tower and the London Eye.

Flores added that public form, whether it be a billboard, a monument or a statue, contributes to its surroundings while being a public spectacle that seems to have no immediate purpose.

“This seeming purposelessness is productive and is actually generous in its invitation for creative engagement. It introduces something that is not an obvious instrument of, let us say, commodity or propaganda, which has an overriding objective. It is there to dynamically make people consider, or reconsider, the ways of thinking and doing that have a great deal to do with their everyday life and social upheaval, their routine or revolution. This is why, for instance, the Rizal Monument controversy some years back involving the Torre de Manila was vital in the public discourse. It sets off questions around heroism, heritage, memory, patrimony and so on,” he said.

But beyond the visual and cerebral purposes of public art, it’s also important to note that this type of work brings with it economic advantages.

Architect Amado de Jesus wrote in a 2011 Inquirer column that installation of public art is “a highly cost-effective way of driving economic revitalization in urban areas.” It drives foot traffic and also generates jobs for artists, suppliers and craftspeople.

“In some cases, public art has attracted funding from financial institutions,” De Jesus wrote in his column “Green Architrends.”

Perhaps this is one of the reasons art installations have become staples to major commercial establishments like malls.

Jefrë pointed out that private developers lately have embraced the idea of public art. The US-based artist, for one, has collaborated with SM and other developers in the Philippines on many occasions. His sculpture of animals native to the Philippines is still displayed at the entrance of SM Aura in Taguig. His work titled the “Book of Life” is installed at Robinsons Galleria South. His sculptures in Jacksonville, Florida, and Double Dragon in Pasay City are also in the works.

While many of his works in the country are commissioned by mall developers, Jefrë said that art is for everyone, and icons ultimately make up a city and not a territory.

“I don’t think people, when they drive around and say, oh, I’m in Robinson territory, or I’m in Ayala territory. They just see it as a city, and that public and private should ultimately always blend in seamlessly,” he said.

Edsa may be notorious for its traffic (it is often described as a “parking lot”), but “Time” is not the only thing that stands still on Metro Manila’s main artery. Edsa is also home to many landmarks and statues situated along various points. In Caloocan, a granite and bronze memorial of Andres Bonifacio commemorates the struggle for Philippine independence. Along Edsa and White Plains Avenue is the People Power Monument, which commemorates the bloodless revolution that took place on the very road. Edsa Shrine, or the image of Mary atop a small church at the corner of Ortigas Avenue, is seen from the flyover.

These works, which were built to remember turning points of Philippine history, have endured many decades, redevelopments and changes of the urban landscape.

The “Time” statue, which was built by a corporation, has a different purpose, according to Flores.

“[‘Time’] was rather envisioned to fascinate, to stop errands in their tracks, and at the same time propose a concept of time through contemporary sculpture and under the patronage of a corporation. It renders an abstraction, like time, through a very palpable material and recognizable figuration, a presence that is a spectacle in itself and may elicit a range of responses, from wonder to introspection,” the art critic said.

The verdict is still out on how “Time” will be remembered by Filipinos, Flores said.

“It’s too early to tell if these initial effects would prove to be just novelty over time or would lead to exciting revelations in the urban imaginarium. The sign of achievement lies in the willingness and interest of the public to invest in it as something worth the intellectual and affective trouble,” he added.

Flores said that taking a pause to contemplate on the figure may just be a much-needed break for normalcy.

“Perhaps this is the vital promise of the ‘Time’ statue, which was unveiled in pandemic time. As we look forward to the ‘new normal’ while COVID-19 alternately lingers and looms, we are chastened and steeled by our relationship with the times—and with time itself, how we have too much of it or how it is running out.”

For Jefrë, “Time” is a modern work that could reflect the idea of being Filipino.

“This one has some kind of interpretation that can evolve, but it’s still a very common subject, which is his idea of the value of time,” he said.