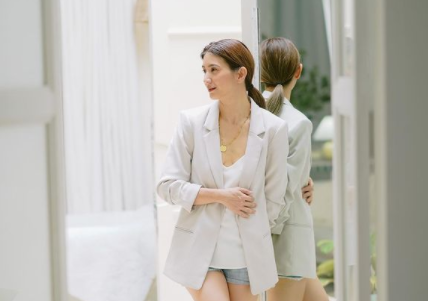 Actress-vlogger Rica Peralejo shared with fans some knowledge about theories on mirror neurons which supposedly can explain the behavior of a person.

Peralejo quoted Bessel van der Kolk who wrote “The Body Keeps the Score.” The doctor-author “has spent his professional life studying how children and adults adapt to traumatic experiences,” as per his official website.

Peralejo shared that “mirror neurons explained many previously unexplainable aspects of the mind, such as empathy, imitation, synchrony, and even the development of language,” as seen on her Instagram page yesterday, Oct. 17. She can also be seen posing before mirrors in a series of photos in the post. Images were taken by Jay Jay Lucas and Chestknots at Balara Content Studio.

“‘Neural WiFi’ —we pick up not only another person’s movement but her emotional state and intentions as well. When people are in sync with each other, they tend to stand or sit in similar ways, and their voices take on the same rhythms,” she added.

But this is not always the case as “mirror neurons also make us vulnerable to others’ negativity, so that we respond to their anger with fury or are dragged down by their depression.”

“I’ll have more to say about mirror neurons later in this book, because trauma almost invariably involves not being seen, not being mirrored, and not being taken into account,” she said, noting that “treatment needs to reactivate the capacity to safely mirror, and be mirrored, by others, but also to resist being hijacked by others’ negative emotions.”

Peralejo explained that that these concepts are all connected to “how stories of others are helpful in our healing process,” which she said she will discuss further in an upcoming vlog. JB