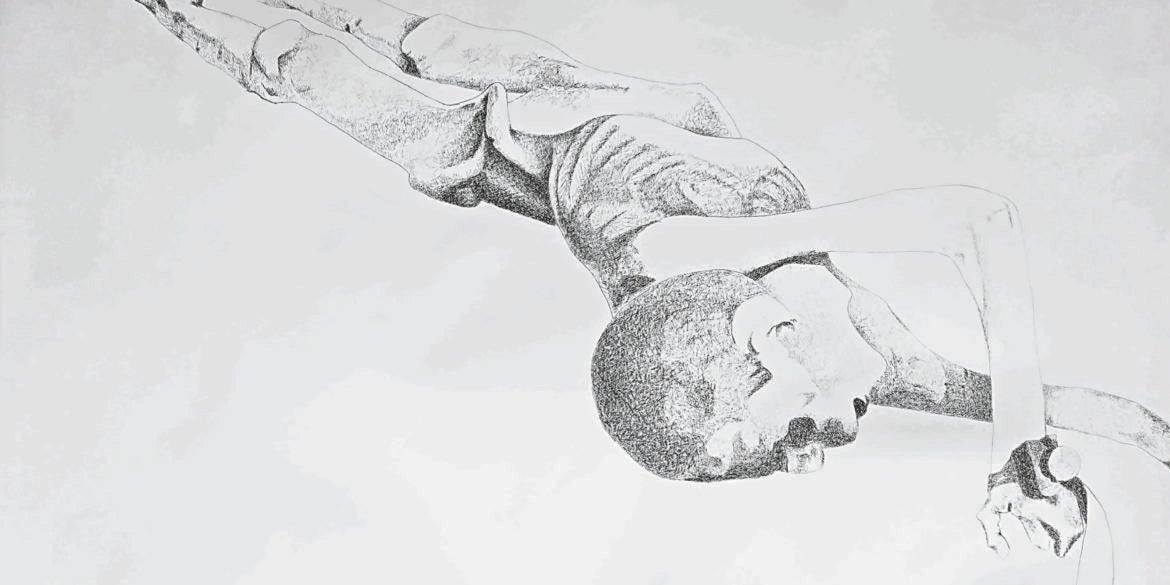 Fernandez sketched victims of the Holocaust during his artist residency in Japan in 2019.

The religious leader is also an artist: Musings on mortality

The pencil drawings appear to be floating in space. Carefully sketched and meticulously shaded, they range from the twisted and emaciated bodies of victims of the Holocaust to studies—many studies—of dead flies, on their sides and upside down. They might seem like the sketches of an angsty teen but these large-scale drawings were made by Br. Edmundo “Dodo” Fernandez, FSC, president of both De La Salle-College of Saint Benilde and La Salle Green Hills.

The compiled drawings, all 21 of them, are the results of his residencies in Japan and France. Two years ago, Fernandez took a sabbatical where he spent several weeks drawing and sketching. A graduate of the University of the Philippines Diliman with a degree in Fine Arts major in painting, he finds ways to pursue his passion in art and fulfill his duties as a leader.

“My role as president of the two schools is a full-time job that takes up all of my time,” he told Lifestyle in a phone interview.

Before he started his current job, however, he requested that he be allowed to take a break.

“When I am at residencies, I am an artist. Afterward, I resume my duties as a Brother-

Leader,” he said in a statement.

Fernandez secured his residencies and managed to include a pilgrimage to the Camino de Santiago in Spain where he walked 800 kilometers in 38 days, staying at hostels he had prebooked.

He described the solo trip as “life-changing” and “immersive.” Since he had made prior bookings in the different towns where he would spend the night, he was able to walk at his own pace.

“I stayed in former monasteries that were atmospheric, to say the least,” Fernandez said. Any ghostly encounters? “Thankfully, none.”

When he embarked on his artist residencies—the first at the Shiro Oni Studio in Gunma, Japan, followed by the commune of Caylus in France—he arrived mulling a vague concept.

“I was basically fascinated with mortality and held an abhorrence to war and needless violence,” he said. In Japan, he sketched bodies of Holocaust victims, their knees knobby and cheeks sunken.

“In six weeks, I made three large drawings. There was a fourth but I didn’t finish it so I threw it away.”

He returned to the Philippines for a week before heading to France where he started off sketching a nautilus shell that took him two weeks to complete.

“The shell looks like it has two or three shades of gray but there is actually a whole gamut. That’s what I focused on when I was drawing.”

His mentor who would visit him every three days suggested that Fernandez loosen up because he was “too controlled, too exacting.” That’s when the artist began sketching flies, taking note of the angles of their legs, the opacity of their wings.

More than the change of subject, however, Fernandez appreciated being told what to do for once.

“At my age and in my position, nobody challenges me. I appreciated that. I will always welcome that kind of problem over a problem of running a school,” he said.

“How to approach my art was always an issue in my residency.

I would wake up and think, ‘how do I approach this piece of paper today?’ That’s a lovely kind of problem.”

Fernandez then began experimenting using mixed media like charcoal, graphite dust and image transfers. Those fly drawings and his other sketches are now on view in the exhibit, “Drawings: From Residences in Japan and France,” at the Tall Gallery of Finale Art File until Oct. 20.

Months after he returned, during the height of the pandemic, he came across a video of the Camino de Santiago showing the places he had been to, and a well of memories bubbled forth.

“I started crying and it wasn’t just tears; I was sobbing. It just goes to show you how much I yearn to go back. There’s really two parts to me: One is a leader and brother, the other is artist. My whole life has been spent trying to put the two together.”