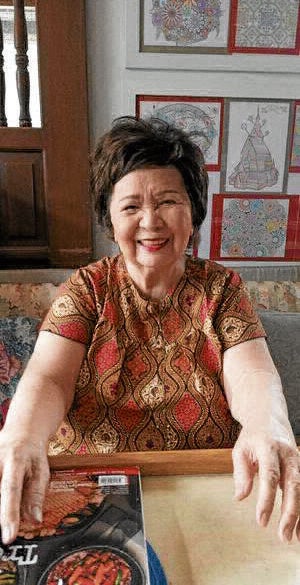 Lita Andres Villanueva on her 88th birthday on Sept. 29: “Unlike other oldies, it seems I cannot rest as much as I want to. Not if you have 14 ‘apos’ and four ‘apo sa tuhod.’”

At 88, she’s busy preparing her ‘pamana’ to her seven children—a black book of tried-and-tested recipes

I am 88. Unlike other oldies, it seems I cannot rest as much as I want to. Not if you have 14 apos and four apo sa tuhod. It seems it has already become a habit for all of them to depend not on their moms, but on Lola, for snacks any day of the week. For example, there is one apo whose only joy, I think, is Lola’s champorado, and nothing else.

I had collected recipes and compiled them in a thick black notebook. I told my children that it was my pamana for them: all tried-and-tested recipes. Sadly, Tropical Storm “Ondoy” (international name: Ketsana) beat them to it, as the notebook was destroyed during the floods.

So, I started another black book. I get the recipes from two broadsheets, magazines, neighbors, friends, relatives, barkadas and a co-church worker. A special recipe was sourced by a good friend from a magazine she was reading during her beauty routine in a neighborhood salon.

A church coworker has perfected her recipe for the church’s many potluck gatherings. Additionally, a neighbor’s helper in the apartment where we lived years ago graciously shared a recipe for a simple afternoon snack.

Slice each saba diagonally into 3-5 slices. Set aside.

In a big bowl, beat the egg. Add water, salt and milk. Add the flour, baking powder and sugar into the egg mixture. Add the sliced saba into the bowl. Mix to fully coat the saba with the batter.

Drop each slice of batter-coated saba into the medium-hot oil. Cook until golden brown.

Mix all the ingredients, and spread onto a big Pyrex pan. Set aside.

Combine all ingredients above, until mixture resembles coarse crumbs. Spread on top of the bananas.

Bake in preheated oven at 375ºF for 25-30 minutes, or until crumble is golden brown.

Prepare bilao: Line with aluminum foil, and top with banana leaves (which have been cleaned and softened over a stove flame). Set aside.

Cook the malagkit rice in a rice cooker, with about 7 cups of water; it shouldn’t be too mushy. Set aside.

In a big kawali, boil the coconut cream (1 cup water may be added). Stir occasionally. The gata will turn into coconut oil. Stir until the latik is formed. Set aside the latik (for topping), and leave enough oil in the kawali.

Put the cooked malagkit rice into the oil. Add brown sugar. Over low heat, mix and stir continuously until the oil is incorporated into the malagkit rice and sugar, until thick.

Spread the cooked biko onto the prepared bilao. Sprinkle the cooked latik on top of the biko.

Note: The main attraction of the biko is the amount of latik. The latik from this recipe should cover almost the entire biko in the bilao.

The author, 88, also spends her time reading, watching K-dramas and clipping various articles from newspapers. Before the lockdown, she would join the neighborhood ladies in an afternoon game of mahjong weekly.