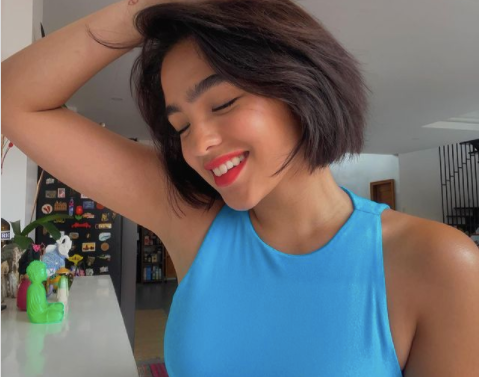 Young actress Andrea Brillantes can relate more with her Marga character in “Kadenang Ginto” than with her role as Mira in “Huwag Kang Mangamba.”

Brillantes admitted having difficulty in the pious role of Mira during the online press conference for the finale of the series “Huwag Kang Mangamba,” yesterday, Oct. 25. The series’ remaining episodes will show on the Kapamilya Channel, TV5, Kapamilya Online Live, iWantTFC, TFC, WeTV and iflix. Meanwhile, “Kadenang Ginto” was also another ABS-CBN production which aired in its own TV channel before the shutdown.

(For me, as an individual, I find it hard to play Mira. Actually, there are many times that I said I want to play a villain because the two [roles are] very much in contrast.)

Brillantes feels she can relate very much to Marga, although she clarifies that she is not bratty.

(I am not saying that I am a brat, but I can relate more to Marga, because I admit that I am not as strong as Mira, who can really stand to be kind.)

Brillantes finds the role of Mira difficult to portray because of the “pressure” and the “weight” to represent to the Gen-Z audience a young character who spreads the word of God and advocates for people’s restoration of faith.

(I found it difficult to make my [scenes] organic every time, because to Gen-Zs, when they see and hear the same thing over and over again, the tendency is they lose interest.)

Brillantes therefore has to make adjustments such as in delivering her lines, because she does not want her audience to get bored at her and miss out on the important messages of the show.

Now on its last three weeks, “Huwag Kang Mangamba” will show sisters Mira (Brillantes) and Joy (Francine Diaz) face an uphill battle in fulfilling Bro’s mission, as they try to unite a town torn apart by a false god. JB