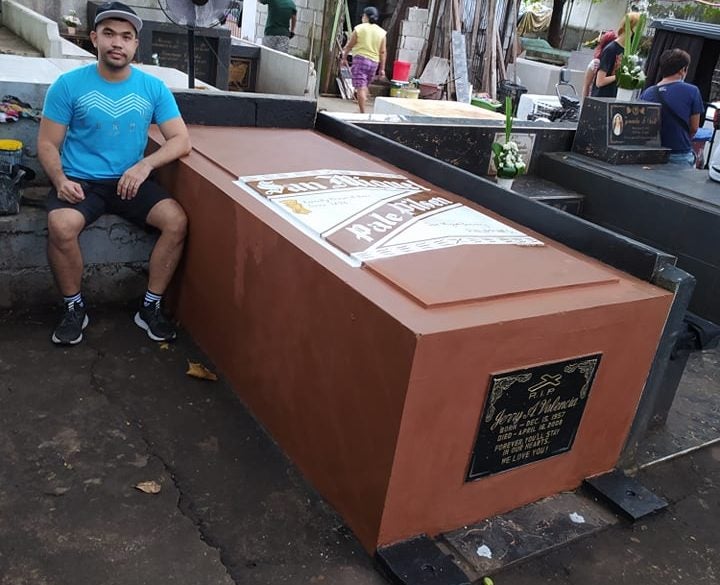 Mural artist honors dad by doing what he does best: Paint

MANILA, Philippines — It’s an annual tradition for millions of Filipinos during All Saints’ Day to offer flowers, candles and even food on the graves of their loved ones to cherish their memories.

But freelance mural artist Jae Valencia has gone a step further. He is continuing a unique tradition, spanning a decade, to honor the memory of his father by painting reminders of his dad — on his tombstones.

“I want his tombstones to stand out, so our remembrance of him will be special,” Valencia told INQUIRER.net in Filipino on Thursday (Oct. 28).

“My inspiration are my father’s interests and hobbies like basketball, plants, music, cigarettes and beer,” the 30-year old artist added.

Jae’s father, whose remains were buried at Aglipay Cemetery in Pateros, died of a heart attack in 2008.

Painting on his father’s tomb has been an annual tradition since 2011, according to Jae.

Continuing the annual tradition, Jae created another piece for this year based on his father’s favorite brand of beer.

He finished the painting on Thursday, a day before the government ordered cemeteries nationwide shut down as part of COVID-19 restrictions.

Jae said he hoped that his father would be proud of him now that he has gone a long way as an artist.

“I know it’s late and I will never see his reaction to my artworks,” the artist said.

“So if you still have the chance to show your parents how much you love them, do it.”