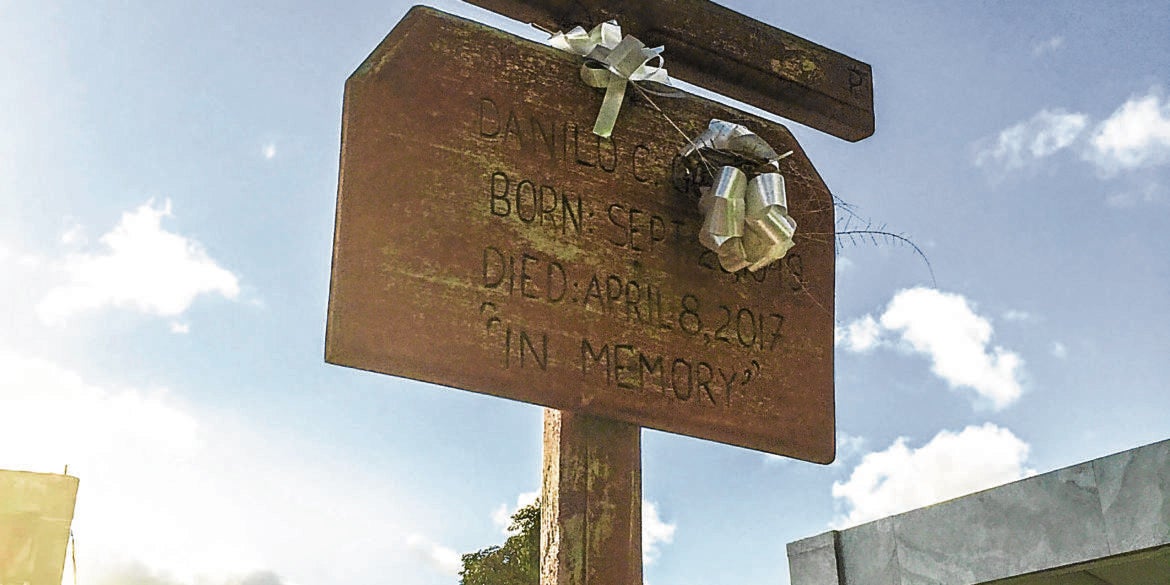 An example of the “krus ng patay” in its own final resting place —EDGAR ALLAN M. SEMBRANO

On the last day of October and the first two days of November, Filipinos traditionally flock to cemeteries to pay their respects to departed loved ones.

This occasion is marked by family reunions and salu-salo, and even gambling and drinking sessions, apart from Masses and prayers.

These funerary traditions are testaments to the rich heritage of the country in terms of death and the afterlife.

All over the Philippines, these are evident in the boat-shaped graves of Batanes, the mummies of the Cordillera, the hanging coffins of Sagada, the secondary burial jar burials of Palawan and Sarangani, the cave burials in Romblon and Iloilo, and the elaborately designed and marked gravesites in the Sulu archipelago.

In precolonial Tagalog society, one of more than a hundred ethnic groups in the country, the dead were buried beside houses, a practice that can still be seen in the Cordillera, among the various indigenous groups and in the fields.

However, if the dead was a member of the nobility, they, noted William Henry Scott, “were entombed, together with a shade above it, around which smoky fires were burning for days.”

It is also possible that these graves were marked either by stone or wood, which later coalesced with Christian practices introduced by the Spaniards, and as a result, evolved into wooden crosses that serve as head markers.

These practices are still being done today in many parts of the country, particularly in rural areas, and the town of Paete in Laguna has a unique tradition in relation to this.

Called krus ng patay, it is a funerary accessory made from wood and carried in front of a funeral procession.

These are normally seen in the town’s two cemeteries, both located at the foot of the Sierra Madre mountains. Catholics unofficially call them the “Lower White” and “Upper White” due to their topographic locations, divided by the national road in Barangay Quinale and the municipal cemetery located at its border with neighboring Pakil.

Attached to the cross is a wooden rectangular plate which bears information about the dead, akin to today’s lapida (gravestone).

The bottom part may have evolved from pointed to flat, as burials have since been normally done in niches, and not dug in cemetery grounds.

In research on the heritage significance and safeguarding of Paete’s traditional crafts by professors Jame Monren Mercado and Marygrace Ac-ac of the University of Santo Tomas and De La Salle-College of Saint Benilde, respectively, they noted that the krus ng patay used to be made from narra, but baticuling is now the preferred wood due to the scarcity of the former.

The krus ng patay is one of close to 20 traditional arts and crafts of Paete that they documented which include, among others, woodcarving, taka making, metalsmithing and boat building.

“During the burial rites, the cross is placed at the burial site and is either permanently mounted using cement or just placed on top of the nitso or tomb,” the study notes.

The crosses are made by carpenters, notably Amang Peter Paraiso, free of charge, as “a sign of sincere donation made in honor of the deceased person and as a charitable deed for family members.”

This practice, according to them, spread from Paete to nearby areas, such as Pakil and Kalayaan, as evidenced by a few of these crosses in their cemeteries.

Local historian Joven Cajipe says the tradition started after the Second Vatican Council (Vatican II) in 1962 to 1965, wherein a number of changes were made in the Catholic Church.

Pre-Vatican II, Cajipe says the priest, accompanied by altar servers carrying ciriales and incense, would fetch the dead at home and lead the cortege to the church for the funeral rites, and then on to the cemetery.

“After Vatican II, this practice was discontinued and the ciriales was replaced by a wooden cross with a small wooden lapida attached,” he says.

These crosses and the coffins, he says, were normally made by relatives and friends of the dead, as residents of Paete are known carpenters.

There is another curious tradition: Cross bearers are male youth or adult members of the community who have mental disorders, and as an unwritten rule, are determined according to who arrives first at the home of the departed once news reaches them that a member of the community has died.

That person would attend the wake and serve as the cross bearer on the burial date.

The person’s desire to be an altar server, as they would consider themselves, is most likely the reason behind this phenomenon, said Cajipe.

“As it is not quite possible for them to be altar servers because of their condition, they settled for being cross bearers to have the semblance of being sacristans, and participate in a procession and in this case, a funeral procession,” he says.

Ac-ac, a native of Paete, says the krus ng patay tradition is important as, together with the customs related to the departed, it does not only honor and remember the dead, but also gives importance to them and their memories.

“While growing up, I was used to seeing kids carrying wooden crosses in front of funeral corteges while bands play at the back,” she says.

Ac-ac adds that the band would fetch the dead on the day of burial, after about three to five days of the wake, and accompany the cortege to the church and to the cemetery.

She says a wake and the succeeding funeral rites are not complete without the presence of the cross bearers who do not want their role taken over by other individuals in the community.

A heart-wrenching truth is that they could get a free meal during those wakes, because they often belong to a broken family or have been neglected, she said.

There were many of them before, says Ac-ac, “and now, in case there is no special child or person who would carry the cross, that cross would still be part of the cortege and placed in the funeral car.”

Once the dead is buried, the krus ng patay served as the temporary lapida while the permanent cement or granite lapida was yet to be mounted.

Once the permanent lapida is in place, the wooden cross is set aside in another part of the niche or mausoleum.

“The residents of Paete are religious, especially before, and the remembrance of and prayers for the dead, as well as attending wakes and condoling with friends and relatives, are still very much alive today,” says Ac-ac. “The krus ng patay has become a part of our culture and part and parcel of the town’s funerary tradition.”

Its sustainability is assured by the transfer of knowledge from older to younger carvers and carpenters of the town.

“The funeral tradition here in Paete is a community activity, with the fervent help of family members, friends, relatives and even children or persons with special needs,” says Ac-ac.