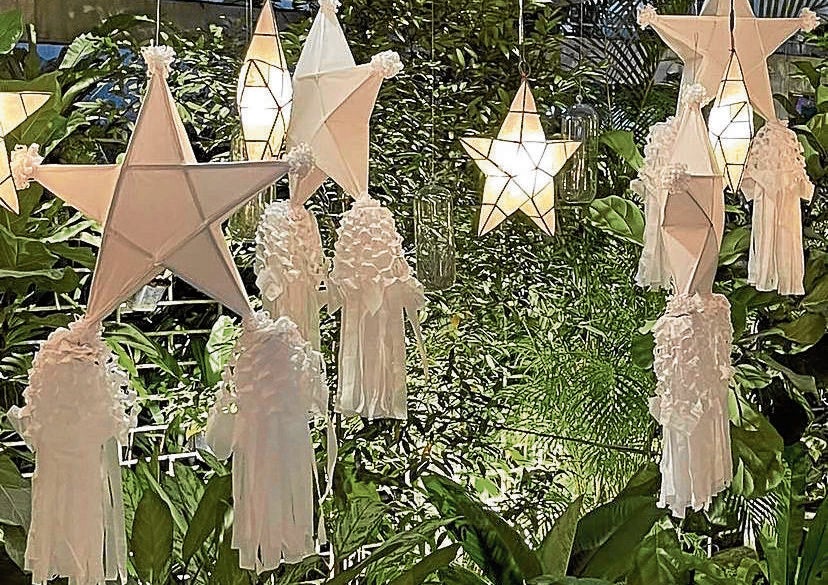 The search for traditional ‘parol’

People are pining for prepandemic traditions, like shared meals with family and friends or simply putting up decorations

For many Filipinos, the approaching holiday season will be one tinged with nostalgia. After close to two years of living and coping with the pandemic, people are longing for a sense of normalcy, with many pining for traditions they were unable to keep last year. These can range from shared meals with family or meet-ups with friends or relatives home for the holidays to simply putting up the decorations.

The younger generation might only be familiar with parol made using sheets of colored plastic, but before these became ubiquitous, the bamboo-frame lanterns were covered with delicate papel de japon and accented with paper foil cutouts.

Traditionally, they would be lit from within using a small candle which made them highly flammable. They would then be hung from windows in the barrios to light the path of parishioners on their way to the Misa de Gallo (dawn masses). The effect, one imagines, must have been magical.

Now, however, you’d be hard-pressed to find vendors selling this type of parol. They’re easy enough to make as long as the materials are available—bamboo ribs, string, Japanese paper cut to size, perforated foil panels and a container of homemade paste—but few artisans are willing to spend the time making them.

Popular blogger Marketman went to Las Piñas City last month in search of someone who still made traditional parol. His late mother used to go there to buy parol. He had no exact address but still managed to find him after spotting a partially completed parol hanging in a garage.

“A gentleman was hunched over . . . hammering out the intricate foil patterns, not with an Exacto knife but with carving tools! It was stunning. Handmade with both passion and love,” Marketman wrote in his Instagram (@therealmarketman).

Unfortunately, the parol-maker’s schedule was fully booked, and had been for weeks. “We talked for a while and he sensed perhaps a kindred spirit . . . and agreed to try and squeeze one last parol for me.”

The next day, Marketman received a call from the parol maker who said that a client of his didn’t get one of the parol they ordered and asked if he was willing to buy it. The “ginormous” parol is now proudly displayed near his front door.

Rheeza Hernandez, a mother of two from Malolos, Bulacan, also had a hard time convincing aging parol artisans in Angeles, Pampanga, to make a few lanterns that she planned to resell. She first spotted the traditional parol during a heritage tour several years ago.

“I’m part of the Facebook group, Advocates for Heritage Preservation. Before the pandemic, there would be monthly trips to different towns and cities where we would visit churches, museums and ancestral houses,” Hernandez told Lifestyle.

At Museo Ning Angeles, she saw the elaborate parol that would be paraded around the city during the annual Lubenas Ning Angeles (procession) held in December. Aside from the star shape, the museum displays two others: one shaped like a cross, the other as a fish—both symbols of Christ. She was able to find several artisans and willing buyers so she placed orders for star-shaped parol and sold them in 2019.

“I wanted to help them after I found out that they had been getting fewer and fewer orders through the years. The pandemic made things even worse.”

Last year, Hernandez was diagnosed with breast cancer and is undergoing treatment. She still considers herself fortunate but wanted to help defray her treatment costs and at the same time help the parol makers of Angeles.

“I used to order from three people but one of them passed away recently,” she said.

She is part of a Viber-based fundraising activity to revive the paper parol industry for the benefit of breast cancer patients and the 2022 presidential campaign of Leni Robredo. Their product: parol with pink accents.

Even if they are told that there are buyers willing to spend more on traditional parol, makers often aren’t willing to get down to work.

“They’re fine with it as long as they have a simple Christmas meal to share. Sapat na ’yun para sa kanila (that’s enough for them),” Hernandez said.

Marketman views the situation more pragmatically. As the owner of the Cebu-style lechon (roast pig) chain Zubuchon, he had been ordering paper parol to spruce up the different branches during the holidays. This writer remembers seeing dozens of small red parol hanging just out of reach in their SM Megamall branch a few years ago and wanting to take one home.

“It’s a significant amount of additional work. Plastic is so forgiving and durable [but with] paper you have to worry about the moisture level of the paste, not glue. You have to finish each edge, plus paper can get punctured easily so storage while selling is an issue,” he told Lifestyle.

“I think if malls and other businesses like ours placed big orders early enough, then that might perk up interest,” he added.

He used to order over 400 paper-covered parol yearly from a supplier in Cebu until they refused a few years ago.

“We spoke with over a dozen vendors in Las Piñas about getting paper parol, and they flat-out refused. Even dangling a willingness to pay more (say 20-50 percent more than plastic?) got shrugs,” he wrote on his Instagram last week.

His persistence, thankfully, paid off. One family agreed to make 200 paper-covered parol that will decorate the Zubuchon branches in Manila. He plans to give a few of them away to customers in mid-November.

“They’re not elaborate but they are traditional, local, organic, handmade and earnest. Just like I recall them from my youth,” he said.