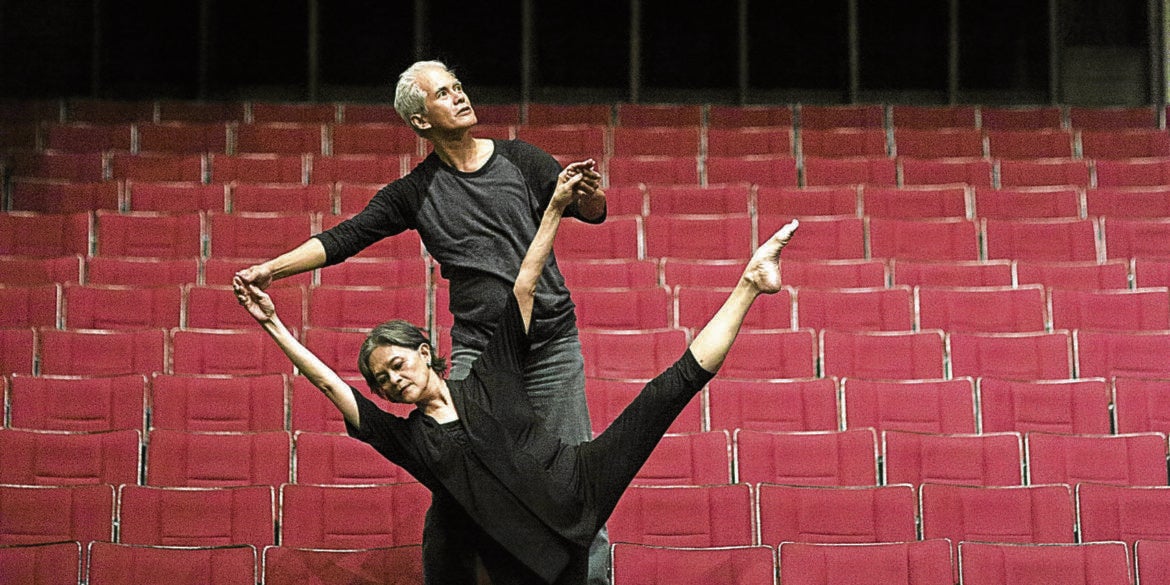 Like their duet onstage, former dancers Nonoy Froilan, 71, and wife Edna Vida, 67, have been gracefully transitioning into new ventures in their mature years.

They are like two peas in a pod. As the principals of Ballet Philippines (BP), they matched each other physically and artistically in their pas de deux. After their performing careers, they continued to help each other as regisseurs in BP productions.

Former BP colleague and now arts consultant Nes Jardin witnessed their lively onstage and offstage partnership, such that he eventually curated their first-ever visual arts exhibit at the C Lounge of Conrad Manila. Aptly titled “Duets,” the exhibit features Vida’s dance paintings and Froilan’s photography of clouds, all done during the lockdowns.

“For 50 years, Nes had seen how connected we’ve been. We were happy we could do it again together in other media,” said Vida. Not aiming for the heavens in their creative journey, they enjoyed the steps along the way.

Upon his retirement at 42 in 1993, BP honored Froilan with a swan song concert. After the standing ovation at the Cultural Center of the Philippines (CCP), he and his wife came home to a house with no power as the bill had not been paid. After a month, Froilan realized that he would no longer receive a salary.

Fortunately, a few years before his retirement, he visited companies in New York and Los Angeles, observed how classics were restaged, and gathered materials on “Swan Lake” and “Giselle.” He then offered his services to BP for restaging, teaching classes and coaching contestants for international competitions.

He recalled that in the ’70s, he took up photography under BP’s official photographer Rudy Vidad. Rekindling his interest in the camera, Froilan started documenting shows for the major companies and dance schools and branched out into orchestra, piano and violin concerts. Froilan was earning more money as a videographer/editor than a dancer.

At age 50, Froilan marked a turning point when director Chris Millado cast him in title role of “Makbet” in Rolando Tinio’s translation of the Shakespearean tragedy for Tanghalang Pilipino. Millado’s treatment integrated Asian movements which were choreographed by the couple. Froilan was daunted by the long lines, his Waray accent and his coactors, who were stage veterans. Vida, who played Lady Makbet, felt timid about her “Inglesera” accent. Eventually, she gained the confidence.

“Chris prepared us. Doing the play was comfortable because it was experimental. We danced on sand. I was not as nervous as when I danced ‘Firebird.’ That’s how scary ballet is,” said Vida.

In 2015, director Raffy Tejada met Froilan and Vida at a beach house in Vigan and was amused by their dynamics. Consequently, he cast them as an estranged couple sorting out their hurts in purgatory in “Hintayin sa Langit” at Virgin LabFest.

“When we rehearsed at home, neighbors thought we were quarreling over the same issues,” said Vida. Their performance drew rave reviews that they were asked to reprise their roles the following year. Through that play, ABS-CBN cast the couple as caretakers of a winery in the rom-com “On the Wings of Love.”

In 2017, Froilan landed the role of an old man in the teleserye “Be My Lady,” where he stayed for several seasons. Although he had a minor role, he rode on the popularity of the series. His friends in Samar jested that Froilan could run for mayor.

Last year, Froilan felt a second retirement during the long lockdown in 2020. There was no income coming and his savings from his teleserye were drying up. Rental overdue letters from the condo appeared.

“We were living one day at a time. Sometimes I would wake up at 3 or 4 a.m., thinking about how to pay the bills and not get into debt. Yet, we’ve been fed by God,” said Froilan. “With His blessing, there would be a project sent to me via Google Drive.”

Froilan likewise had to migrate to virtual teaching for the CCP and Philippine High School for the Arts.

While hanging out in their condo balcony, Froilan started observing the clouds, their formation and the changing colors. He snuck out of the condo and took a roundabout route to Makati, evading checkpoints just to capture the clouds in the right moment. When he came home, he would adjust the color saturation or make high-contrast photos for depth or to emphasize a shape.

He likens his journey to driving on the road and reading the signs that point to his mission. This year, there were bends on the road, one that led to a joint exhibit at Conrad, and another to the Gawad CCP Awards in Dance, which acknowledged his long career as performer, mentor, and dance video and filmmaker who took an occasional detour to photographing the clouds.

In tune with the One

After a life of nonstop rehearsals, shows, tours, workshops and socials, Vida, then BP associate artistic director, retired in 1989 to be mother to her children. Although Froilan was a superstar, the artist’s income was modest. Yet, Vida enjoyed the wealth of time being creative with her children.

Since art was one of her children’s activities, Vida displayed their works on the wall. She realized then that she could also create.

“Nonoy was surrounded by artists in Calbiga, Samar. He always sketched. I got his pencil and paper,” she recalled. She started copying dance photographs from Vidad’s black-and-white photos.

Figurative drawings and gestures came naturally because of her daily exposure to the human anatomy as a dancer and teacher. “I would massage Nonoy so I knew every muscle,” she added.

As she drew, Vida heard a voice telling her that the shading was either too dark or too soft. That energy has been a driving force in her creativity.

When she did cartoons, she was invited to be a regular contributor for Manila Times in the early ’90s. Then a friend connected Vida to Gallery Y where she held her first solo exhibit of dance figures in watercolor and pencil. Initially, she felt insecure about encroaching on the visual artists’ field.

“It was worse than doing a full-length ballet in front of the board at CCP,” she said. Nonetheless, half of the paintings were purchased.

In 2000, the late Ami Miciano invited Vida to exhibit her works at Penguin Café and Gallery. That same year, she made her foray as an actress in Gilda Cordero Fernando’s “Luna,” a love story about ghouls.

Through the years, Vida continued to choreograph, teach, direct concerts, write and hold workshops all over the country under the CCP and the National Commission for Culture and Arts.

During the lockdowns, Vida and Froilan, who were always with their children, suddenly found themselves alone. They started to rediscover each other and adjust to their idiosyncrasies.

When they weren’t doing household chores, they went their separate ways to create. Froilan had been collecting photographs of clouds, hoping that they could be used by a company as a background for one of its shows.

Vida started to work on caricatures, graceful movements of fish and dancers in watercolor and ink. The solitude brought immense pleasure after a busy albeit fulfilling life in the theater. As she posted photos of her dance paintings and note cards, friends took notice. After a dry spell, money started coming in, as customers went to her home to purchase her artworks.

Vida attributed the joy imbued in the painting to the One. “When I saw the exhibit, I said, ‘It’s Your glory and I’m merely Your instrument. Do whatever You please.’ That’s where my heart is. When you open up your channel, He can use you.” —CONTRIBUTED