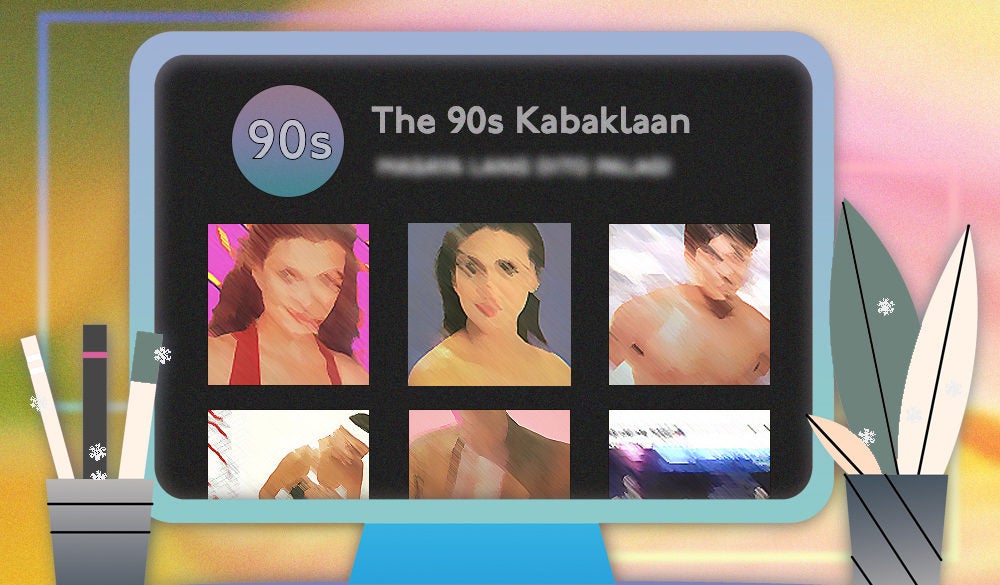 There’s something about the end of the year that makes you wistfully look back at the past. With so much uncertainty ahead, what with the COVID-19 curveball life’s thrown at us the past two years, there is relief knowing that we’ve survived the tsunami of COVID cases, the massive layoffs, the unremarkable pandemic response by the government, and the work-from-home situation that suddenly required us to clean up our college dorm living arrangements.

The performance of adulthood has been a source of anxiety for most of us. One of the questions that keep coming up whenever I talk to friends is: how did our parents juggle paying the bills, sorting out the housework, and taking care of their children, with trying to find time for themselves? As it is, we’re already barely keeping ourselves together.

When I chanced upon The 90s Kabaklaan on Instagram––an account that has gained a significant following from LGBT+ people for its queer pop culture throwbacks, the glimpse of the past that it offered gave me a lot of comfort. It felt familiar. It was a time capsule that showed our generation how simpler things were for us back then: a time when we weren’t bogged down by adult responsibilities. It brought me back to those days when all I wanted was to see Kenji Motoki on People’s Tonight while they promoted “Gatas sa Dibdib ng Kaaway”, my younger self going through the motions of having an adolescent crush.

But unlike before when I was paranoid about getting caught, I could now look at all the celebrity crushes I’ve had then, but now without the fear and threat of hellfire (thanks, born again Christian upbringing.)

I took the chance to connect with Victor, the creator of the account. I wanted to bond over our mutual nostalgia, trying to imagine for myself the high school life I didn’t have: that is, being an out gay person and gushing over boys I liked.

“It was such a fun time,” he said about growing up in the 90s. “Lumaki ago sa compound with a lot of older cousins. I grew up in a small town in Tarlac. I was the bunso. Ako yung pinakabatang pinsan. I started collecting comics, and napapansin ko na yung mga sexy magazines.

“I would only buy a few, late 90s na. And then the collection got bigger, because some of my friends, some of online magazine community, they would start selling their magazine collections in bulk. That’s how I amassed hundreds of magazines.”

Having grown up in a suburban community as well, I wondered how Victor––who still isn’t out to most of his family––got away with collecting these homoerotic literature at all.

“When I buy, siguro it would raise suspicion for them, especially to my dad, but it never came to a point na kinukuha nila at susunugin. Tatanungin lang nila, ano yan, bakit may ganyan, or brush it off. But no discussion. ​​Probably they didn’t know how to handle a gay kid.”

From these magazines, he moved on to social media as an adult. He claims that he’s inspired by other popular meme pages (think SaintHoax and Diet Prada), being a self-confessed lurker. He didn’t leave his past behind, obviously: he eventually brought that life to the present with The 90s Kabaklaan.

Because Chika Chika and all the other magazines he had hoarded pandered to their gay audiences, Victor found creating content from their materials much easier.

“​​For showbiz magazines, the audience I would argue, fifty percent are gay. Most definitely, Chika Chika magazines, and the magazines na half-naked guys: definitely for the gays.

“The article, they interview about the guys na nafe-feature sa magazine, there’s an LGBT angle: Would you ever consider dating from the same sex?  Other articles about, like for example Nora-Vilma, mga fans na nag-aaway. Being fanatics, passionate ang gays about it. I would really say it caters to a gay audience. Sa Chika Chika magazine, they have this section na phone pal, where you would send your photo and tell your address, if you would like a pen pal…most of them are looking for men.”

And just like how Chika Chika knew its readers, Victor also understood that it is our generation that is wistfully craving for this type of content.

“People who grew up in the ‘90s are the ones who have social power nowadays. It’s been a while since we’ve had a ‘90s resurgence, but now it’s 2021, and the ‘90s happened 30 years ago. It’s time to revisit. Most of the gays in the ‘90s, hindi pa out, they couldn’t discuss it openly. But now you can. You can have the discussion sa page.

“Millennials are the first generation to enjoy social media. We have to remember that the ‘90s was the start of liberation for the Philippines. Its a sense of liberation that we missed. Maybe we gravitate to that now that we have a crappy government. It pulls heartstrings for most people, it’s about freedom, not being pretentious.”

The tricky thing about the past though is we tend to view it through rose-colored glasses (there’s a name for this cognitive bias: rosy introspection.) Professor and author of Philippine Gay Culture: Binabae to Bakla, Silahis to MSM J. Neil Garcia told me that appreciating our community’s history should be balanced by also acknowledging the struggles Filipino queer people faced during this time: “I don’t find this as a particularly difficult task, for the person who truly wishes to know: being aware of the history of the local LGBTQ community requires precisely appreciating both the victories and struggles, the joys and adversaries, that this community has faced throughout the years.”

Victor says The ‘90s Kabaklaan doesn’t aim to erase the queer struggles from that era. “I think it was on my second month when I started my Pride series, I featured five videos related to LGBT struggles noong ‘90s. The first one was, kamusta ang trans noong ‘90s, and then I also covered about the early years of SOGIE Bill, which was first drafted by Miriam Defensor, then the first Pride parade…tina-try ko as much as I can to add variety and to let people know that it was not as easy and fun then as it is on the page.”

He also acknowledges as well that he has had a few missteps. He remembers a time when he posted about actor and aspiring senator Robin Padilla, who has made quite a number of controversial statements recently (among which, defending philandering.)

“​​I was swarmed with DMs and comments, why would you post this––not naman cancel, [but they told me I] should rethink about posting him. I took it down. From then on, naging cautious na ako on who to post.

“Right now, the biggest issues are the COVID-19 pandemic and the government elections. If [a celebrity] is against a pressing concern at the moment––like anti-vaxxer silo or pro-government sila––then that would make me think twice kung ipo-post ko sila.”

He sheepishly admits: “I never intended 90s Kabaklaan to cover all aspects of kabaklaan, that’s really not my intention, just the surface level lang. Celebrating queer icons, it’s nice to cover everything…but at the end of the day, it’s just me. Yung material ko is just one aspect of kabaklaan. When people ask me, what’s next? What is kabaklaan for you? Yung mga deep questions na ganun, I’m not prepared to answer. Alam ko yung page, hindi nya talaga kino-cover lahat ng aspects ng kabaklaan.”

Maybe The 90s Kabaklaan doesn’t have to do that. Maybe it should remain as it is, a romantic view of a past long gone: the responsibility to ensure that all identities and experiences are seen and heard does not have to be a solitary effort, but a collective one. And unless our community intensely fights for a future that is more accepting and inclusive, we risk getting stuck in these fairy-tale fantasies of our queer history.