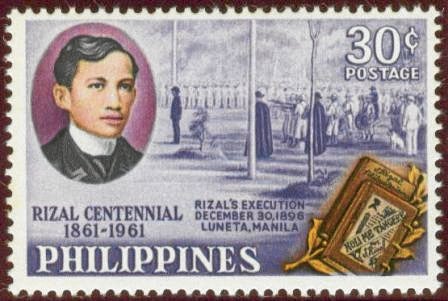 Jose Rizal is an icon of the Philippine fight for independence, a patriot who chose the pen over the gun, and a person who left a great mark in the field of literature and nationalism.

This year, we celebrate the 125th anniversary of his martyrdom and it’s a good time to remember the tale of his heroism.

On June 19, 1861, Jose Rizal was born José Protacio Rizal Mercado y Alonso Realonda in Calamba, Laguna, to Francisco Mercado Rizal and Teodora Alonso Realonda. He is the seventh of 11 children.

At the age of 9, he was sent to study in Biñan, Laguna, where he progressed in academics and in physical activities.  Then, he was allowed to study in Manila. He passed the entrance examinations at Colegio de San Juan de Letran owned by the Dominicans, but he chose to study at Ateneo Municipal after learning that Dominican friars in Calamba were pursuing a court case against his mother. In 1872, he was admitted to Ateneo.

On March 14, 1877, he obtained his Bachelor of Arts degree at Ateneo Municipal with high honors. It was during that time that his talent in writing, poetry and sculpture truly showed their beauty. One of the sculptures he did at Ateneo was a statue of the Sacred Heart of Jesus. 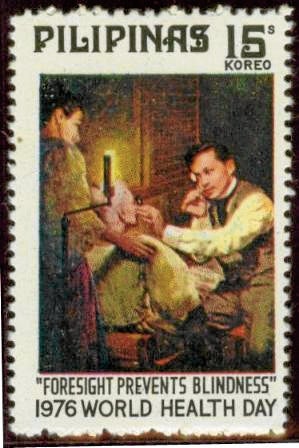 In 1878, Jose studied medicine and philosophy and letters at the University of Santo Tomas (UST) and at the same time, pursued a course in surveying at Ateneo. He actively participated in literary activities.

Rizal became a doctor. He did his first surgery on his mother’s eyes. He also practiced medicine while he was in Hong Kong to earn money.

Rizal’s committed campaign for reforms in the Philippines led him to write his two novels: “Noli Me Tangere” and “El Filibusterismo.”

His first novel, partly written while he was staying in the home of a Protestant minister, pastor Karl Ullmer, in Wilhelmsfeld town in Heidelberg, Germany, was published in March 1887 through the financial assistance of his friend, Dr. Maximo Viola. Viola loaned him P300 to print the first 2,000 copies. Both of his novels portrayed the pathetic situation of the Filipinos in the hands of the Spanish authorities and the influential religious corporations. Copies of the novels were smuggled into the country since the Spanish authorities banned them.

On June 26, 1892, he arrived in Manila with his sister Lucia aboard the SS Don Juan. A week later, on July 3, he founded the La Liga Filipina in the house of Doroteo Ongjunco on Ilaya Street in Tondo, Manila. The association was created to empower Filipinos into doing what is right and to promote a more liberalized nation. But only three days after its founding, Rizal was arrested and exiled.

On July 17, 1892, Rizal was deported to Dapitan. During his time in exile, he established a clinic, a school and constructed a water system. He bought tracts of land from his lottery winning and developed it into a farm.

On Sept. 30, 1896, while the Isla de Panay was sailing through the Middle East, the ship captain received orders of Rizal’s arrest on charges that he had a hand in the revolution that was already raging in the Philippines. Rizal arrived in Barcelona as a prisoner and was briefly detained. On Nov. 3, 1896, the famous prisoner arrived in Manila and was imprisoned in Fort Santiago. On Nov. 26, he was tried by the military court on the charges of rebellion, sedition and illegal organization of societies presided by Judge Advocate Enrique Alcocer at the Cuartel de España. He was meted the death penalty.

On Dec. 30, 1896, he was marched out of Fort Santiago toward Bagumbayan Field. Rizal faced the Filipino soldiers of the firing squad guarded by the Spanish soldiers. Volleys were fired. He fell but with a great effort, he turned his back and fell facing his executioners.

From childhood to death 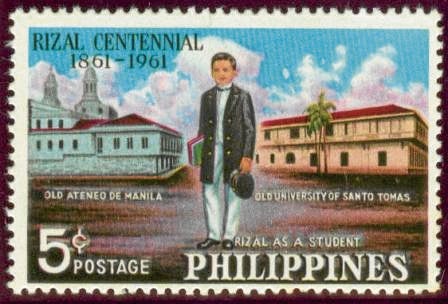 Today, the details of Rizal’s life—from his childhood to his death—can be learned though stamps. He is one of the most celebrated figures on Philippine stamps.

UST professor Augusto De Viana, who has authored a textbook for a course on Rizal, said, “We must encourage the new generations to read Rizal’s works of literature as they still have relevance today.”

He added, “Jose Rizal promoted nationalism and giving importance to our values and traditions, which is something that is needed today.”

There are lessons to be learned from the 125th anniversary of Rizal’s martyrdom: “As Rizal fought for freedom against oppression, we still need to fight for it as well . . . Rizal’s message is very classic, anything that Rizal wrote in the past is still relevant today. We only have to open the book of the past to have a correct future.”

Alvin R. Alcid, chief history researcher of the National Historical Commission of the Philippines, said, “The theme for this year’s celebration for Dr. Jose Rizal is ‘Rizal: Para sa Katotohanan, Agham at Buhay.’ We should think about the relevance of Rizal, focusing on advances in science due to our current situation.”

On Dec. 30, one of the major activities of the National Historical Commission of the Philippines will be the unveiling of a Rizal monument at the Department of Science and Technology in Taguig. Alcid said, “The solution to the pandemic is science and Rizal epitomizes that. Rizal’s profession as a doctor helped his countrymen. We must give emphasis on medicine to help us to win over this pandemic. That is the message of this year’s celebration.” 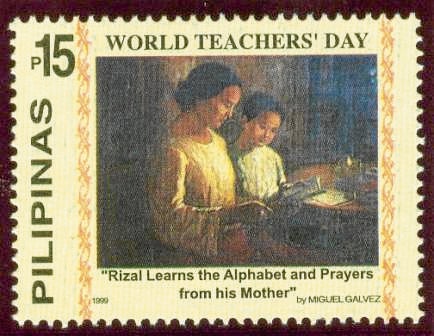 Eunice Beatrix, Israel Viyo and Ryman Dominic Albuladora are in-house designers of the Philippine Postal Corp. and the creative designers of the stamps that will commemorate the 125th martyrdom anniversary. They said, “The design features key moments in Rizal’s life, which fit the theme of this year’s celebration. These moments bring out his best qualities and what inspires people the most. The design also shows people being released from their struggles and uniting as one, something that Jose Rizal advocated for.”

It is the hope of the designers that people who see the stamps remember those who made and make sacrifices for us. They said, “We should not forget about their sacrifices for our safety and independence. That is still applicable today, especially our front-liners who work hard to keep us safe. As we face this great challenge, we all must unite.”

The designers also hope that people continue to remember the heroes of our past—not only those who are known but those who are almost forgotten.