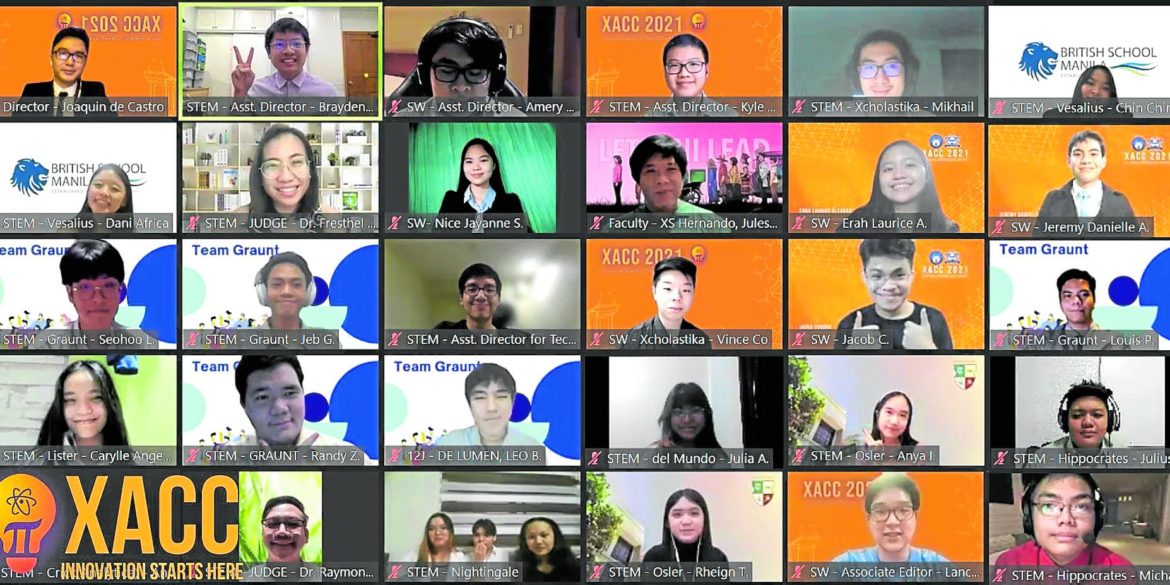 Last Dec. 11, our flagship project, almost nine months in the making, was birthed. The Xavier Academic Case Contest (XACC) is a case contest for high school students in the Philippines, which is composed of a STEM (science, technology, engineering and mathematics) and Spoken Word category.

In the STEM category, teams of three to five students tackled the reopening of physical classes through writing and presenting a research paper. This included recommendations for school administrations and policymakers on how to safely carry out the return to physical classes.

Teams, of course, did not take on the case empty-handed, as they attended a lecture on navigating information about the pandemic and answering epidemiological questions by one of the STEM judges.

Contestants faced a no less pressing case in the Spoken Word section, where students attempted to address vaccine hesitancy through the spoken word. Aside from their poems, contestants also came up with write-ups to expound and elaborate more on their pieces. They, as with the STEM teams, were given around a month to finish their written works. During the contest proper, these were presented or performed live in front of the respective judging panels.

The project was first conceived when my mentor, Ms Nicah Santos, who also became a judge for the contest, introduced me to the concept of a case contest. Until then, I had no idea what a case contest was. Nonetheless, I was quickly won over by the much more engaging and relevant format compared to other events where participants are mostly passive.

But even after finalizing the details of the project, there was never a time I could honestly say that the preparations and execution were going well. Given that we did not have a clear roadmap to follow, many cracks and potholes had to be filled in along the way. Scheduling conflicts, lack of manpower, low registration numbers and the ever-present technical difficulties were just some of the challenges we had to deal with to ensure the event even pushed through.

Many times I was brought back to when I first proposed a website for our tutoring club at the start of online distance learning. Others thought it too difficult and unfeasible. But I’m not one to be discouraged by these. In the process of creating XACC, I did feel like I had one burnout too many. Admittedly, the situation sometimes seemed daunting enough that I and the rest of the organizing committee seriously considered aborting the project.

But the presentations and performances of the contestants as well as the support of the judges more than made up for the stress and issues behind the scenes.

In watching both the STEM presentations and Spoken Word performances, I realized how this competition was fundamentally different from your usual Math or Science Olympiads. Whereas in other contests awards may seem like the end goal, here the competition was much more intertwined with solving current issues rather than the dichotomy of winning and losing.

On top of the hard skills in research and writing, it was moving to hear the takeaways our contestants had from the competition. Spoken Word contestants shared that “poetry is still relevant” and “still has a place” even in an era that seems to be dominated by “technology and science.” Just a few of the learnings STEM teams shared were learning to “work well with [students from] different grade levels,” and that “taking courage for a bigger step to innovation can be fun.”

The event we ended up having was by no means unique or even innovative. There are multiple other case contests in search of new ideas. But innovation, I’d like to think, is more than an end result. It’s also a process. It’s taking that first leap, and not being afraid to keep on going, even if it means moving through new and unfamiliar paths.

That leap was taken not only by the organizing committee, but also by the teams and contestants. In fact, it is something many have had to do in the pandemic as businesses pivot and people adapt to volatile circumstances. So while this contest itself may not be deemed unique, I do hope it provided unique and enriching experiences for our contestants in the same way it did for me. —CONTRIBUTED INQ