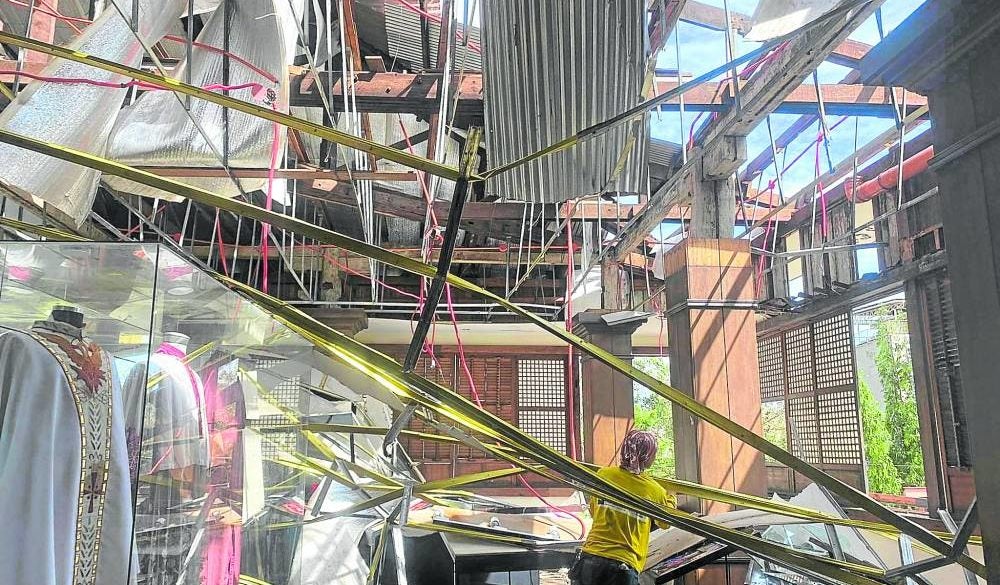 Just four days following the completion of the reconstruction and restoration of the Spanish colonial churches in Bohol damaged or destroyed by the 2013 earthquake with the turnover of the Maribojoc Church, Typhoon “Odette” (international name: Rai) struck Mindanao, Visayas and southern Luzon with a heavy blow.

To date, more than 400 people perished in the strongest storm to hit the country in 2021, with many houses and government infrastructure damaged or totally ruined.

Heritage-wise, a number of structures of historical and cultural importance were also affected by the storm, including those previously affected by the 2013 Bohol earthquake.

The most dramatic is the scene of a flooded Loboc poblacion, where the church complex, which includes the mortuary chapel and the freestanding belfry, was submerged in water, a scene reminiscent of the effects of Tropical Storm “Seniang” (Jangmi) in December 2014.

Many heritage houses in Loboc were also affected by the floods and damaged by strong winds. These include the Spanish-era Incon House, the 1880 Benigno Incon House, Dompor House built in the 1920s and Jose Varquez House, among others.

In neighboring Loay, a number of heritage houses were also damaged, notably Clarin House, the most imposing and prominent house in town located in the lower part of Loay. Its thatched roof was blown off and a portion of its front wall collapsed.

This house was owned by Bohol’s first civil governor, Don Aniceto Clarin, who was appointed to his post by the American government in 1901, and his wife Margarita Butalid. It was declared a heritage house by the National Historical Institute in 1998.

The book “Casa Boholana: Vintage House of Bohol” notes that the house, built around 1841, was restored to its former glory by the late architect German Torrero.

“With wooden walls and floors, and a mighty thatched roof supported by hardwood trunks, the house has largely retained its mid-19th-century appearance and historic furniture,” it notes.

The house is a museum featuring memorabilia of Don Aniceto and his sons, Senators Jose and Olegario Clarin, as well as heirloom furniture.

In a Facebook post, Bohol historian and culture specialist Marianito Luspo describes the damage on the house as heartbreaking.

“All the cyclones that caused havoc in Bohol in the past 180 years of Clarin Ancestral House’s existence did not do this much destruction,” he said. “It pains me now to see it in a such state.”

Luspo, author of the 2008 book “Sukaran: The Domestic Architecture of the Towns of Loay and Loboc in Bohol,” called on government agencies and heritage advocates alike “to help us bring this very significant relic from our historic past back to its former grandeur.”

Elsewhere in Bohol, heritage houses in areas such as Cortes, Dimiao, Baclayon and Garcia-Hernandez suffered damage, particularly blown-off roofs due to the violent winds of the typhoon.

Also, at least eight church complexes in Bohol were damaged by the typhoon.

A section of the roof of Alburquerque Church was blown away, as well as sections of the roof of Baclayon Church and convent, Valencia Church, Immaculate Conception School also in Baclayon, parts of the transept and nave roof of Loay, and the churches of Dimiao (plus its belfry) and Cortes.

The main door of the church of Calape was blown away, while the dome of Tubigon Church, with its ceiling painting, also gave way.

Maribojoc’s alternate church, which was built after the 2013 earthquake, also collapsed.

Past destructive storms in Bohol and nearby provinces which destroyed or damaged heritage structures included Typhoon “Nitang” (Ike) in 1984 and Typhoon “Ruping” (Mike) in 1990.

In Cebu, portions of the roof, particularly at the nave, chancel and sacristy of the 19th-century church of Sibonga were damaged, with its convent roof blown away. Luckily, the 1930s ceiling paintings by famed Cebuano artist Raymundo Francia survived the onslaught.

A portion of the Carcar convent was damaged due to a fallen tree, while the nearby St. Catherine’s College building built during the American period sustained roof damage.

Also in Carcar, a number of heritage houses were affected, mostly roof damage. These include Don Florencio Noel House, or Dakong Balay, a declared heritage house, and Mancao Panuncialman House, whose windows were blown off.

A survey of the damaged heritage structures was undertaken by the Cebu archdiocesan commission on church cultural heritage led by its head Fr. Brian Brigoli and Jobers Bersales of the University of San Carlos, which led to the identification of additional edifices affected by the typhoon.

The Cebu team noted that the second level of the American-era Chua Chinca House in Alegria was destroyed, Sadumanjugni House in Dumanjug lost its roof, and there was substantial damage to Fernandez House, also in Dumanjug. Other Dumanjug heritage houses were also damaged.

In Southern Leyte, Maasin Cathedral sustained roof damage, while the Malitbog Church dome and belfry roof were blown away.

At least one heritage house in Malitbog was also affected by the typhoon.

In the town of Macrohon, also in Southern Leyte, Sto. Niño de Amparo Chapel, famed for its splendid retablo (devotional painting) and the image of the Child Jesus, was totally ruined.

In Bubong, Lanao del Sur, Bubong Mosque was flooded by the torrential rains brought about by the typhoon.

In Pagbilao, Quezon, Puentecito de Caliboyboy was structurally compromised due to the effects of the typhoon.

Its parapets collapsed and cracks in its abutment appeared due to flooding and a water pipe that burst, according to John Valdeavilla of Tuklas Tayabas historical and heritage group.

A letter was already sent to the National Commission for Culture and the Arts for assistance in conserving the bridge, one of three extant Spanish-era bridges in Pagbilao.

Meanwhile, the National Historical Commission of the Philippines (NHCP) has already coordinated with authorities in the Visayas on the condition surveys of damaged heritage structures for restoration by the national government.

NHCP Chair Rene Escalante said damage assessments have been undertaken by his agency, leading to the prioritization of possible intervention and preparation of a program of work.

The NHCP will then ask for a budget from the Office of the President and eventually execute restoration work, he said.

A number of these structures, especially those that have minor damage, are already being repaired by their respective owners.

In a recent online interview, Fr. Ted Torralba of the Tagbilaran diocese and Catholic Bishops’ Conference of the Philippines–Episcopal Commission for the Cultural Heritage of the Church said a temporary measure to stop the possible damage and deterioration of the damaged ceiling paintings in the churches is a Band-Aid solution of covering the damaged portions of the roof with tarpaulin, which was done immediately in the convent of Baclayon housing the church museum.

“The more stable measure is to replace the blown-off roofs with new ones, as is being done on Valencia Church and Important Cultural Property and National Cultural Treasure Dimiao Church, while other heritage churches are in the process of buying the GI (galvanized iron) sheets (supplies are short due to demand), and others opt for ordering the tarpaulins, like Alburquerque and Tubigon,” he said.

He said the heavy flooding of Loboc Church Complex may result in the weakening of its structure and foundation.

“In the long term, having learned lessons from the October 2013 earthquake and now from Typhoon Odette, the Tagbilaran diocese will put in place, with the assistance of the concerned government agencies, a disaster and risk management plan with emphasis on the use of wind engineering in roof design and the incorporation of renewable energy sources,” he said.

Torralba, who is also a canon lawyer, said that “the vision is to make these churches not only serve their primary function as places of worship, but as truly, in the words of Pope Francis, ‘field hospitals,’ i.e., that sacred architecture truly become buildings that heal as evacuation centers, vaccination centers, the fortress of faith, a refuge, against natural calamities and man-induced disasters, especially during emergencies. It is, in a way, a recalling of the churches built during our country’s Spanish colonial period when these also served as fortifications/bastions against the Moro raids from Mindanao, earning for their priests-builders the label ‘El Padre Capitán,’” he said.

Torralba also shared that National Museum Director Jeremy Barnes mentioned during the turnover of the newly reconstructed Maribojoc Church that that project closes the national government’s program of rehabilitating the heritage structures damaged in the 2013 earthquake, but how “eerily prophetic when Director Barnes added that we will open another chapter.”

“This might be the post-Odette chapter opened four days after the end of the chapter on the earthquake-induced restoration,” he said.

In the end, he said, authorities just have to learn to build better structures that are able to withstand strong earthquakes and stronger typhoons.

“If this is the new normal spawned by climate change and other natural factors, then resilient, sturdier structures able to withstand these onslaught should be the better normal for heritage-conscious building design,” he said.

“Spiritually, to obtain this type of structure, we need to build on the sure rocky foundation, i.e., the Word Incarnate (cf. Matt. 7:24-25).” —CONTRIBUTED