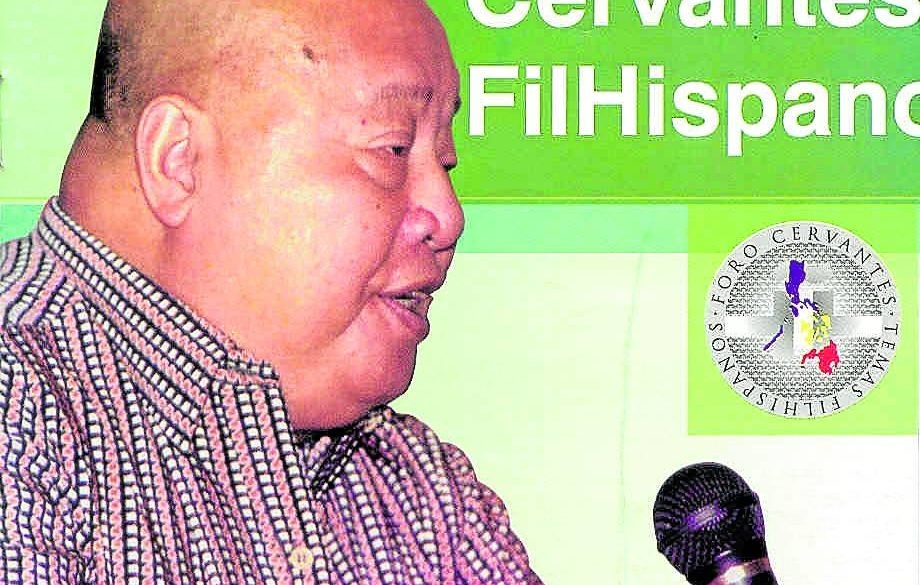 The great Cervanite in Frankie José

Among the many actions I’ve tackled during almost eight years as head of Instituto Cervantes de Manila (ICM), to have invited Frankie Sionil José (FSJ) to give a lecture in our place is one which makes me feel most proud. And one of the best things that has happened to me in the Philippines since I arrived here almost 30 years ago is to enjoy his friendship, and that of his wife Teresita.

I was really impressed when I saw Frankie for the first time. It was in the Cultural Center of the Philippines during the National Artists Proclamation Ceremony in 2001. I was invited as a member of the diplomatic corps. It was one of the first events I attended with this status.

Among all the awardees, Frankie emitted a sort of innate authority. That ceremony seemed tailored for him. I thought of those TV programs in which a famous artist shares his show with friends: “Frankie Sionil Jose and friends.”

Ang Kiukok, an artist I admire, could not articulate a single word during his appearance onstage. He just cried. It did not matter if Kiukok could not speak. He expressed himself as strongly with paintbrushes as Frankie did with his words.

At that time, I knew very little about Filipino literature (scarcely some Nick Joaquin works), so I started to inquire about FSJ’s writings. I was more and more interested in the character, especially when some friends warned me about his being anti-Spanish. On the contrary, Benito Legarda, another contemporary Filipino giant, advised me to invite him to give a lecture in ICM. I thought it was a great idea.

So, my admirable and very dear friend Benito introduced me to FSJ, who in person impressed me as he did onstage, because of his sympathy, his sense of humor, his closeness.

FSJ came to our cozy place, then in the Mayflower building in Leon Guinto; it was a full house, and there was a certain sort of morbid curiosity: a supposed anti-Spanish thinker and writer in the heart of the Spanish cultural center in Manila.

Some minutes before the start of the lecture, a good Filipino friend popped up in my office: “Javier, what have you done? He is anti-Spanish. Be careful!”

FSJ was very much aware about that and he went directly to the point: “People say I’m anti-Spanish, but I tell you: to be anti-Spanish would be to be antiself.”

Since then this sentence has been carved in my mind. He based his statement on his admiration for Miguesl de Cervantes more than on Joaquin’s famous 10 points. He said he wanted to become a writer after reading “Don Quixote.” He delighted the audience talking about his trip to Spain a long time ago with his inseparable Teresita. He taught us why the oranges in the streets of Seville remained untouched, hanging upon the branches of the orange trees.

As a writer who was always on the side of the weak one, he was against the rich, against the powerful. And the rich and the powerful at the time of “The Rosales Saga” was the Spaniard. So he explained how his fame for being anti-Spanish came about.

FSJ responded to my invitation by inviting me several times to the upper floor of Solidaridad Bookshop, where he gathered his friends around a table supplied with delicious dishes cooked by Teresita. Frankie loved to hear me say that the best lapu-lapu in town was the one cooked by her. The chat used to be as meaty as the food: writers, artists, diplomats, women and men, old and young ones exchanged their ideas, comments and opinions in the very friendly homely atmosphere created by the couple.

In 2005, we commemorated the fourth centennial of the first edition of “Don Quixote.” As one of the top activities of that commemoration, we invited FSJ to talk about Cervantes. That magnificent lecture held in the University of Santo Tomas was included in the book “If a Filipino Writer Reads Don Quijote.”

After a 13-year interval outside of ICM, when I came back, I had the pleasure to meet again FSJ at the auditorium of ICM in Intramuros. He honored us by accepting our invitation to the closing ceremony of the exhibit on the poet Miguel Hernández, which was presided by our director general during his visit to Manila.

FSJ greeted me as if the last time we had met was not 12 years ago but the day before. Topped with his very own beret, he greeted me by summoning me as usual: “So many years in the Philippines and you don’t speak Tagalog yet.” I was so happy to verify that Frankie was in such good shape as to come to our lectures regularly. He was active with sharp questions when the floor was opened to the audience.

FSJ preserved until his very end a lucid mind, as shown in his column in Philippine Star. My last invitation to him was to participate in a roundtable discussion on Filipino identity devoted to his beloved friend Joaquin. It was set for March 18, 2020, but because of the lockdown due to COVID-19, we lost the opportunity to enjoy again the presence of FSJ as the protagonist in an ICM activity. But he had done his homework as if he were a high school student instead of a Nobel Prize candidate. And on April 14, Philippine Star published the text he had prepared for the discussion: “Remembering Nick.”

This article, in which FSJ traced back his friendship with the author of “The Woman Who Had Two Navels,” has for me an enormous value: the two greatest 20th-century Filipino writers in the English language together in an activity organized by an institution that promotes the Spanish language all over the world. It was sort of a paradox yet also a metaphor about culture linking human beings beyond borders, languages or religions.

Now that Frankie is gone, this article has an even deeper meaning. I remember Frankie’s tears when his sweet friend Nick passed away. Now, our tears wrap our gratitude to him for his literature, his sense of humor, his ethic and his friendship.

The author is the director of Instituto Cervantes de Manila.