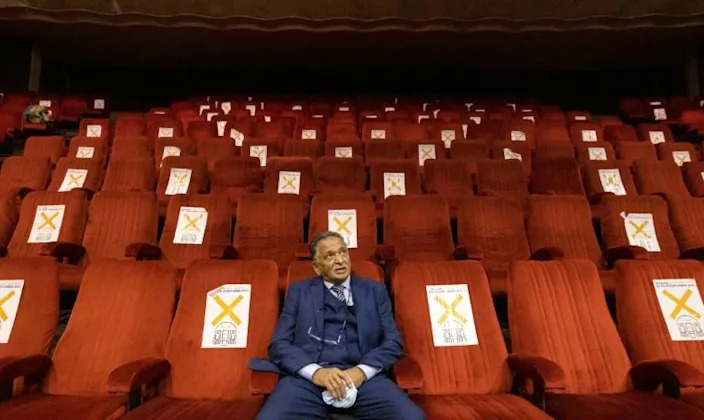 Curtains down on Morocco’s ramshackle cinemas

CASABLANCA — They won’t be playing it again at this Casablanca cinema. Rabi Derraj gazed despondently at the ramshackle 1940s movie house, its doors blocked by discarded mannequins from the nearby market.

“There’s no hope any more. This cinema is dead,” said its longtime security guard.

Al-Malaki once seated more than 1,000 moviegoers, but like theaters across Morocco, it lies closed and derelict.

Enthusiasts are calling for better protection for the buildings, architectural treasures that bear witness to the North African kingdom’s past.

Al-Malaki, “the Royal” in Arabic, was commissioned by King Mohammed V in the 1940s as a grandiose riposte to cinemas reserved for citizens of colonial power France.

The 1942 Hollywood classic “Casablanca”, featuring piano-player Sam, is set in the city.

But decades later the cinema building has become a dumping ground for goods from the surrounding market in the working-class Derb Sultan neighborhood.

“It’s tragic. You can’t measure the historical importance of this cinema,” said Derraj, who has spent almost half of his 42 years as its guard.

In front of the ticket office, a TV almost blocks a list of prices, one of the few indications of the building’s function until it closed in 2016.

Like audiences in other countries around the world where historic theaters have also shuttered, Moroccans have turned to streaming services at home, a trend amplified by the coronavirus pandemic.

A hundred or so theaters face a similar fate to Al-Malaki’s — crumbling for years until they are finally demolished.

Morocco’s first cinemas were built by the French, who had established a protectorate over the country in 1912.

But it was in the 1940s that theaters were built for Moroccans themselves, setting up a golden age of the silver screen which lasted into the early 1990s.

“The Moroccans had a love affair with cinema,” said Francois Beaurain, a French photographer who has produced a book on the subject.

“But television, VHS tapes and today streaming have killed that love,” he continued.

One victim of the trend was the Regent cinema in the northern city of Meknes, a baroque-style theatre built in the 1920s.

Its demolition was a tragedy for Yahla Yahla, who had been its projectionist for 35 years.

“It was very hard for me. It even made me sick,” said the sharply-dressed retiree, now in his 70s.

“I have unforgettable memories from that cinema. I learned my trade there.”

And the closure of the Regent was just the start of his woes. Yahla went on to work at two other cinemas — but by 2020 both had shut.

“The younger generation don’t understand the value of cinema,” he said.

Today, just 27 theaters remain open across the country of 37 million.

They rely heavily on state funding for renovations and for digitizing films.

Casablanca’s Le Rif is one of those still in operation.

Built in 1957, its walls are lined with purple velvet that contrasts with its 950 red fabric seats.

“It’s a unique cinema, but I can’t hide my concern — the situation’s getting harder and harder,” said owner Hassan Belkady, 63.

And the coronavirus pandemic may have delivered the knockout blow: cinemas across Morocco went dark for more than a year before reopening in July 2021.

Despite nine million dirhams (850,000 euros, $960,000) of funding for the Moroccan Centre for Cinematography (CCM), which promotes and regulates film, the industry is struggling to extract itself from the crisis.

Belkady said that since 2020, he had been forced to close two other cinemas in the country’s commercial capital — the ABC theatre, built in 1948, and the Ritz from 1950.

Some of the buildings are officially listed, meaning they cannot be demolished.

But, Belkady asks, “what’s the point in listing buildings as historic if the authorities don’t do anything to protect them?”

“It’s urgent to mobilize, and to act before it’s too late,” he said.