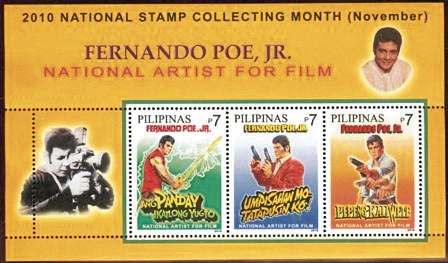 February is National Arts Month. It has been that way since 1991, thanks to Proclamation No. 683. According to the Constitution, “Arts and letters shall enjoy the patronage of the State. The State shall conserve, promote and popularize that nation’s historical and cultural heritage and resources, as well as artistic creations” and “the disciplines of theater, dance, music, visual arts, architecture, literature, media arts and film need to be preserved, enriched and evolved in a climate of free artistic and intellectual expression.”

February is a good chance to explore our rich cultural and artistic identity as a nation. There are many different ways we can show our country’s art importance—visiting museums, learning about Filipino artists and promoting locally made artworks. A unique and special way to do it is through stamps. After all, stamps are used to promote and preserve history, culture and arts.

Stamps can be like little doors that lead you to exploring the different parts of Philippine art. Let me guide you through a few examples.

There have also been many architectural treasures featured on stamps, from old buildings to new ones. In 2003, stamps were issued for Filipino Heritage Month, showing the El Hogar Filipino building, Regina Building, The Luneta Hotel, Manila Metropolitan Theater and University of Manila.

In 2013, stamps were issued for the 150th anniversary of Malacañang Palace. They showed the iconic facade of th e Palace from across the Pasig River.

In 2011, stamps were issued for the 400th anniversary of the University of Santo Tomas. Three of the four designs featured historical structures in the campus including the Main Building, Central Seminary and Arch of the Centuries. On the souvenir sheet, the Benavides Monument by Tony Noel and Quattro Mondial Monument by Ramon Orlina can also be seen. In 2019, a stamp was issued for the 50th anniversary of the Cultural Center of the Philippines (CCP), featuring, of course, the CCP building.

Various churches and their stunning designs have also made it to stamps. In 2019, stamps were issued for the 200th anniversary of the St. Raphael the Archangel Parish Church in Pili, Camarines Sur.

Philippine stamps have also featured some of our nation’s highly recognized artists. For example, in 2019, a stamp was released for the 100th birth anniversary of National Artist for Visual Arts Francisco V. Coching. Coching, known as the King of Komiks, created notable characters such as Pedro Penduko, Hagibis and Don Cobarde.

For Eunice Dabu, one of the in-house designers of the Philippine Postal Corp., National Arts Month is very important as it shows how rich our culture is. “Stamps show how designs evolve throughout the history of our country and at the same time it helps people be aware about our art and culture,” she told us in an interview.

Her profession is also celebrated this month. She said, “Being a designer of stamps, it’s like achieving your childhood dream. I always enjoyed looking at artworks as a child and they encouraged me to make artworks myself.”

For her, designing stamps is a way of helping others as well. “I realized that being a stamp designer helps our country as designing stamps during modern times shows the young generations that traditional art is still a trend.”

She added, “I hope that they support other artists and appreciate the traditional ways of communication such as writing letters because the new generation forgets the old days, and in turn they forget that patience is a value they need to learn. I really hope that they discover the importance of stamps and how it not only has sentimental and cultural value but monetary value as well. I hope everyone can learn what came before and what the foundation of art is.” —CONTRIBUTED INQ