During COVID, one-seat barbershops are a cut above the rest | Inquirer Lifestyle ❮ ❯ 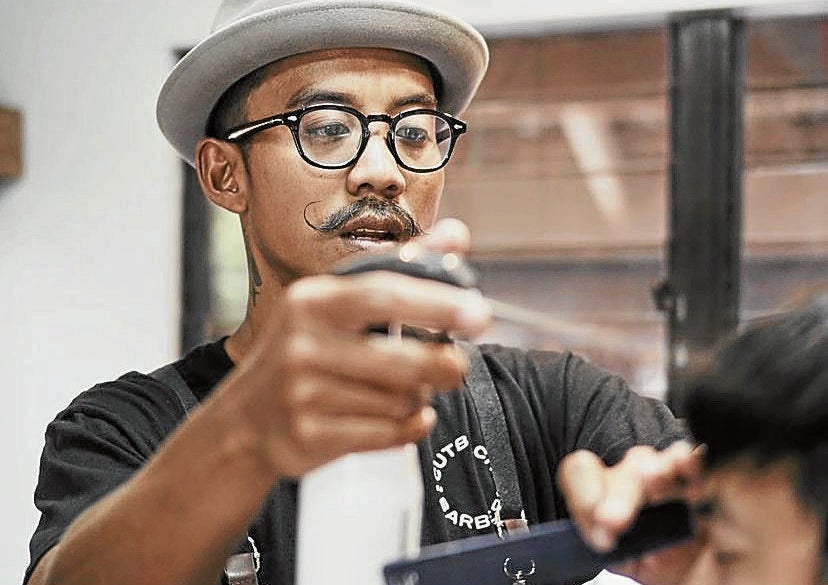 During COVID, one-seat barbershops are a cut above the rest

The longest I’ve ever gone without a haircut was three months, in the first year of the pandemic. It wasn’t for lack of trying, as barbershops were either closed or operated on very limited capacity.

My hair grew out, taking on a pleasantly wavy look. Instead of trimming it myself, I decided to leave it be. The grays multiplied, and I could finally tuck my hair behind my ears.

By the third month, I was in dire need of a trim. I contacted my longtime barber Jojo (@bruno_caymanbarber345 on Instagram), who had been unable to return to the Cayman Islands where he works now. Jojo was vacationing in the Philippines when all flights were grounded.

He arrived at my condo on a Sunday in June bearing a hard case containing all his tools. Instead of taking him up to my unit, I thought it best to have my hair cut by the poolside, just off the main lobby. It was outdoors and there was a wind blowing that day.

Jojo worked quickly and efficiently—within 30 minutes we were done. I tipped him generously because he had come all the way to my place on a Sunday at that, and had trimmed three months’ worth of hair growth.

While I was able to resist getting a haircut for months, many others continued to get regular trims from their barbers, especially those with single-chair set-ups.

Even before the pandemic, Quezon City-based barber Benjie Galit had been operating a tiny barbershop on Limbaga street just off Morato Avenue. He opened JKB Barbershop (@jkbbarbershop on Facebook and Instagram) in 2018, where cuts were done mainly by appointment. His forte is clean cuts with faded back and sides. On weekends when he started early and ended late, he could do as many as 35 clients a day.

“On average, I do 18 cuts, but since the pandemic, it’s down to 15 a day,” Galit told Lifestyle between clients at his shop. “It’s probably because I used to accept walk-ins then, but now it’s all by appointment.”

At P400 a haircut for 15 cuts, that’s still P6,000 a day—nothing to be sneezed at, especially now when so many people are struggling or have lost their jobs. Galit’s customers, many of them regulars, appreciate that he takes the prescribed safety precautions seriously.

“Every two weeks, I take an antigen test and every three weeks, I get an RT-PCR (reverse transcription-polymerase chain reaction) test. If customers want me to go to their homes to cut their hair, they’re the ones who pay for the tests.”

His tiny barbershop is airconditioned, with everything he might need within easy reach. It’s even outfitted with a shampoo basin and chair. Just outside the door and with a view of the carport is another barber’s chair in front of a mirror. It’s for customers who prefer to have their hair cut outdoors.

Next month, Galit will be moving to a bigger space a few streets down on Fuentebella Street that will have six chairs. He said he’s not keen on keeping the smaller space, as restrictions have been relaxed and National Capital Region might soon be placed on alert level 1, the lowest level with minimal COVID restrictions.

Chloe Samontanes is a jack-of-all-trades. A barista in Iloilo before he moved to La Union eight years ago, originally “just for a break,” he is now a barista at El Union Coffee, a bike builder, an accredited real estate salesperson and also a barber (@the_barberista72 on Instagram).

His interest in honing his barber skills was piqued after the actor and entrepreneur Jericho Rosales got him to manage Talas Manileño at Cubao Expo in Quezon City. He was also the barista at Talas but during the slow hours, the barbers would give him tips on how to cut hair.

“I also watched videos on YouTube, so you could say I was self-taught,” Samontanes said. He got a set of clippers, but traded up when a Macau-based friend showed him the transformative power of a good haircut.

“Like me, my friend’s a barista and a b-boy (breakdance boy) but he’s also a DJ. When he came over and cut my hair, he said we should go out to show off my new cut. That was my first legit barber experience. It was so different from getting a regular haircut where you sit down in the barber’s chair, wait for him to finish, and then leave.”

Samontanes’ friend later gifted him with a set of Andis tools that included a clipper, trimmer and shaper.

“If you have these tools, you’re set. They’re all you really need. I told him I’d pay him back for them but he said I should just cut hair.”

“When a Manila guest paid me P250, I told him it was too much, but then he said that’s what he pays his barber and that I did a much better job. That’s when I realized I could earn from it.”

Although he can cut hair anywhere as long as his tools are with him, Samontanes took over 55 Tinta, a tattoo shop in La Union, once a week when the staff was on their day off. He later rented a 10-sq m space above El Union where clients would come in one at a time.

“I opened my space a year before the pandemic forced closures everywhere. I actually made more money during this time because customers liked that it was private and felt safer. It also helped that the landlord lowered the rent during that period.”

He has since brought in another barber to help out, but Samontanes still services his regulars two to three times a week.

“I’m a creative so it all works out. I’m able to cut hair, build bikes on the fly, and work my barista and real estate selling jobs,” he said.