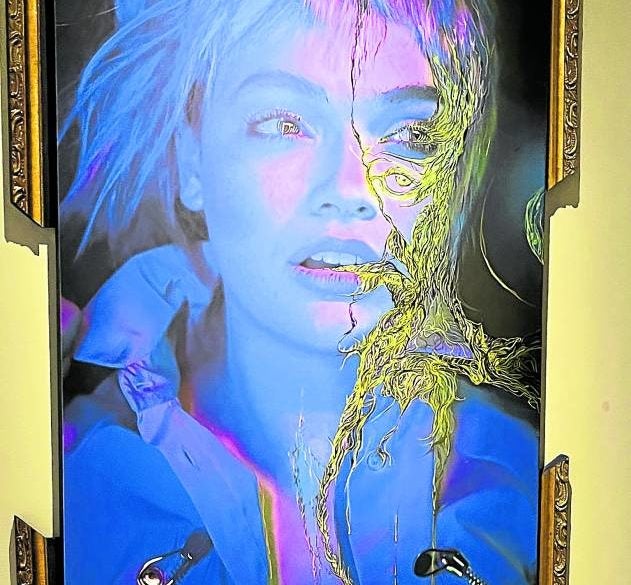 Mark Nicdao paints: ‘Bree Jonson healed the sadness—I started to believe in myself’

Renowned photographer Mark Nicdao celebrated his 43rd birthday by confronting his fears. Stepping into terra incognita, he painted at the start of the global lockdown. Eventually spurred by the tragic death of his best friend and mentor, visual artist Breanna “Bree” Jonson, he managed to complete a series of line art and mixed-media works.

“I wanted to show something,” recalled Nicdao. “I’m scared of colors, painting and brushstrokes. Having to do these was an ordeal. I felt lost.”

Jonson was found dead at a resort in La Union in September last year. Police reports claimed she died of asphyxia.

Nicdao’s Instagram account then was awash with visual homages of his mentor. He went on to clarify that they were not lovers.

“I failed with all my past girlfriends … Bree healed all that sadness through art books, writers, movies and music. I did not pursue her because I was afraid I would just fail. Our friendship healed a lot of my sh-t.”

Nicdao broke down upon hearing of her demise. “That became a wake-up call. If I didn’t do anything, I wouldn’t have expressed my dreams,” he said.

The result is his first solo painting exhibit, “The Imaginings of a Disinhibiting Manic Neurotransmitter,” or simply put, unrestrained emotions and brain hyperactivity during the creative process.

The opening at Leon International Gallery evoked the club ambiance created by shifting colors of LED lights and house music, powered by a DJ. A socially distanced and trendy millennial crowd, half of whom had removed their masks, came to support the photographer.

Gift for revealing the hidden

Nicdao waxed philosophical as he explained his paintings to celebrity guests. Although he studied fine arts, he never took up technique classes. He developed his artistic sense through photography, learning lighting and composition.

The early 21st century belonged to Nicdao. He captured his famous subjects in their most aesthetically and commercially appealing angles. Despite his relative youth in the aughts, he earned the admiration of established photographers for his gift of revealing the hidden magnetism and insouciant sensual allure of his sitters.

Nicdao admitted that after two decades of fame, he had reached a plateau as a photographer. He felt that in order to grow, he had to pursue another creative urge.

Nicdao explained that it’s unlike in photography, where the subject was present, in painting, all he had to do was to envision the composition. On the other hand, he found it challenging to imagine in front of an empty canvas.

He began experimenting on a small canvas by training his hands in fine brushstrokes. His first work “Will o’ the Wisp” exemplified line art wherein flowing arteries create a network of vibrant colors but without shades or hues.

Gaining confidence in his control of the brush, Nicdao ventured into larger canvases. Most of his works seemed like a convolution of veins, interspersed with eyeballs and teeth inside human forms and swirling psychedelic lines. Yet, viewers were touched by the intensity and harmony of colors and the painstaking fineness of the multitude of strokes.

“Bree Jonson inspired me to do all this. She’s my idol. She’s my Caravaggio,” said Nicdao, referring to the Italian Baroque painter who was famous for his dramatically lit, mysterious paintings.

Jonson was known for her powerful but eerie depiction of wildlife and flora as allusions to man’s dark, inner world.

“When I met Bree, I was reminded of Caravaggio’s mastery. She told me, ‘Mark, I don’t understand where your insecurities are coming from.’ I started to believe in myself. Painting has been my dream,” he recalled.

An enigmatic portrait with a black light effect of his late Muse stood out amid the contorted images. Nicdao turned the photograph into a mixed-media work by adding striations that appeared like electrical vibrations. “I observe people through lines, the energy,” he said.

“She (Jonson) made me feel alive again. Being a photographer, you hit a plateau. That’s not me. I’ve always wanted to grow. Learning a new medium will make me a better photographer,” he said. —CONTRIBUTED