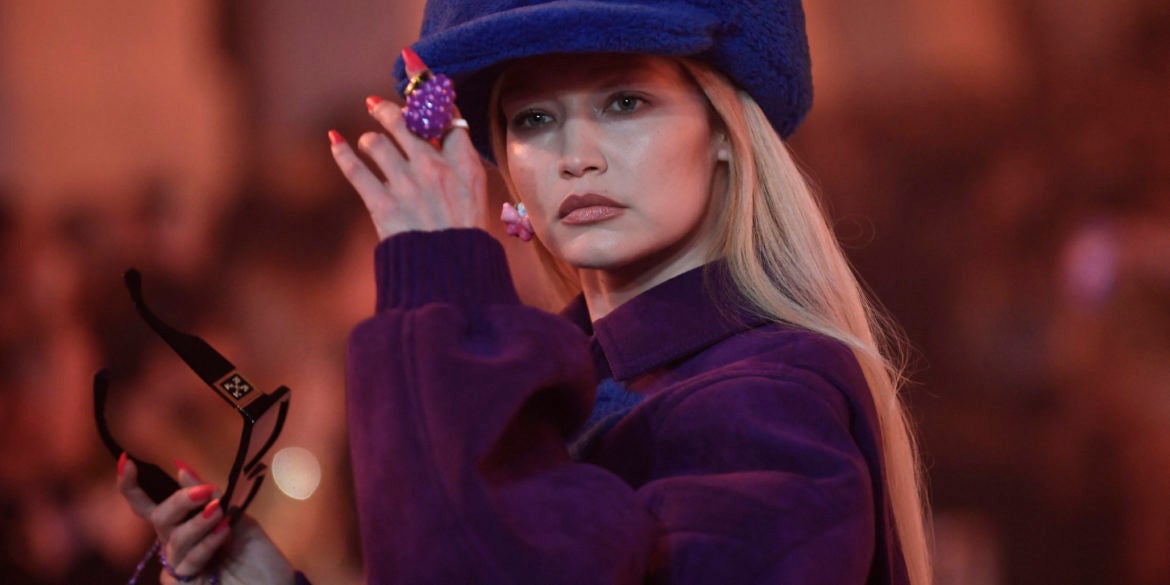 US model Gigi Hadid presents a creation during the Women's Fall/Winter 2022/2023 Ready-to-Wear Off-White collection show during the Paris Fashion Week in Paris, on February 28, 2022. (Photo by JULIEN DE ROSA / AFP)

The stars came out for the opening night of Paris Fashion Week on Monday, which looked set for a return to pre-pandemic normality until the war in Ukraine forced organizers to strike a somber tone.

“War has brutally hit Europe and plunged the Ukrainian people into fear and upheaval,” said Ralph Toledano, president of France’s Federation for Haute Couture and Fashion, in a statement on the first day of the women’s autumn-winter collections.

He urged attendees in Paris to experience the shows “with solemnity, and in reflection of these dark hours”.

The conflict will cast a pall over a fashion week that was back in full pomp, with only 13 of the 95 fashion houses on the official roster staying fully online.

Opening night struck another bittersweet note with the final collection by Off-White founder Virgil Abloh, who died from cancer in November at 41.

But the show was a dazzling affair, with celebrities including a heavily pregnant Rihanna in attendance, and a striking effort to position Off-White in fashion history.

That was partly done with the models, who included megastars of today such as Gigi Hadid and Kendall Jenner alongside veteran supermodels Naomi Campbell and Cindy Crawford.

And it was partly in the clothes, which pulled in ideas from across recent decades — from glamorous polka-dot cocktail dresses to huge shaggy bodysuits — all reimagined with the brand’s trademark street swagger.

Abloh, a former Kanye West collaborator, turned Off-White into one of fashion’s fastest-growing labels and was recruited to head menswear for Louis Vuitton before his career was tragically cut short.

Louis Vuitton, which has a majority stake in Off-White, is banking that it can continue to grow in Abloh’s absence.

“Off-White is in the position that Dior was in 1957 (when its founder died),” Louis Vuitton CEO Michael Burke told Business of Fashion.

“The question is: what has the founding father left? If the legacy is rich, authentic and steeped in values that go beyond fashion, the odds of turning a passing into something eternal are spectacular.”

Off-White was returning to the catwalk for the first time since the Covid-19 pandemic struck — and is not alone.

The biggest names, including Dior, Chanel, and Hermes, are among 45 brands holding live catwalk shows in the coming days as pandemic restrictions ease across Europe.

Saint Laurent, which had dropped out of the official calendar during the health crisis, vowing to set its own schedule, has returned to the regular line-up.

Others are doing a mix of online films and in-house presentations for buyers and press — a concept developed in the last two years, which has remained popular with several houses such as Japan’s Issey Miyake.

– Students of the metaverse –

Before all that, students from the French Fashion Institute got things rolling with an online presentation that merged real (albeit wildly avant-garde) clothes with virtual creations ready for digital living.

“The metaverse is in the process of being built and it will keep growing. It’s important to be in it,” said Laure Manhes, who is studying for a master’s in accessories.

There are logistical advantages to breaking down barriers between real and virtual clothes, she added, since digital fashion allows youngsters to gain a foothold without the expense of making real clothes.

Physical fashion shows will not disappear, she added: “But it will evolve in line with this new way of thinking and communicating.”