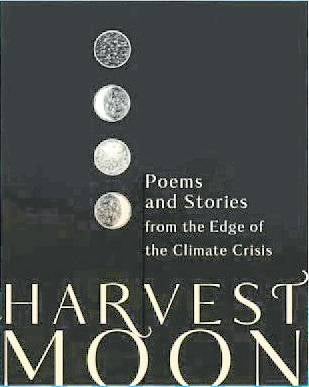 Institute for Climate and Sustainable Cities (ICSC) and Milflores Publishing recently launched “Harvest Moon: Poems and Stories from the Edge of the Climate Crisis,” an international anthology on the lived and imagined experiences during a time of environmental crisis.

The 306 pages of this hefty compilation are brimming with images of people from climate vulnerable parts of the world, and stories of fragility, manmade devastation and generational values relating to climate change. And yet, the book is devoid of the tired and sometimes confusing jargon that often comes with the subject.

“You will not encounter the words carbon footprint, mitigation, finance or neoliberal in this book,” writer and anthropologist Padmapani Perez said during the online launch of “Harvest Moon.”

Perez, along with South African journalist Rehana Rossouw, Colombian poet Alexandra Walter and Filipino author Renato Redentor Constantino served as editors of the international anthology featuring award-winning photographers, established authors, climate scientists and emerging voices. The editors selected 30 photos—not exactly images of devastation, but ones that “showed a place or space with people or traces of humanity in them,” that inspired the verses.

The images were then given to the writers, who selected one image that sparked their imagination, the basis of their work. The contributing writers also received a list of 32 words and phrases that they were not allowed to use, like “global warming” and “climate change.”

“The language around the crisis is riddled with jargon cliches and hot keywords that we all use all the time. But the new works in this book counter this with language and stories that make the crisis legible and that bring it home for those of us who are most vulnerable to its effects,” said Perez, who also leads Agam Agenda.

This is exactly the objective of “Harvest Moon,” to use the power of images and literature to communicate the urgency of the climate crisis, to hasten the response and to involve ordinary citizens in this crusade. To Perez and the other collaborators who worked on the book, essays, poetry and images that evoke human emotions are just as essential as policies and science.

“[Literature] is not the only response and it cannot be the only response, but it’s an important one because for so long we’ve been given the science and the policies around climate change and the climate crisis, which have been insufficient to move us and to bring the crisis home when so many of us are already experiencing it,” she said.

“Harvest Moon” is a follow-up of the groundbreaking anthology “Agam: Filipino Narratives on Uncertainty and Climate Change.” Where “Agam” was composed of verses in eight Filipino languages, “Harvest Moon” is a global undertaking featuring 30 works written in 11 languages (Zapotec, Turkish, Swahili, Kankanaey and the like). The 30 images that accompany the verses were photographed in places like Latin America, Southeast Asia and Africa.

Among the contributed works is “I did not get it,” an amusing short story by Leonardo Padura. The Cuban novelist was prompted by a photograph by Lisa Lorenzo: two men in the middle of a conversation before Manila Bay. The story talked of the surface level of climate change, but also the generational values that contributed to this global crisis.

Xiaojun Wang, a Manila-based Chinese journalist, was inspired by the visible moon over a still Thai train station captured by Vinai Dithaijohn.

In his short story, Wang delved on coal mining and farming, and the risks that low-income workers have to go through to feed their families.

“[The photo] was just beautiful. I loved how calm it was, how lonely it was, and immediately it struck me that life can be full of surprises. Life can be full of good surprises, bad surprises, heavy ones, light ones. But the moon is always almost predictable. And that’s pretty much what we want out of our climate as well,” he said during the launch.

Perez said that they are in talks with other regional publishers to translate the book in Chinese, Bahasa, Spanish and other languages to widen the reach of “Harvest Moon.”

ICSC executive director Constantino added that ICSC will subsidize the rate of the book as long as possible to make the material more accessible to readers. Their goal, after all, is to convince the public to take action on climate change.

“Science and policymaking are essential to the entire enterprise, but they’re insufficient. They have not proven to be the fundamental things that cause people to act. That resides in the realm of the humanities. History has shown … arts provide and fulfill the role. People actually don’t just participate, they derive meaning in trying to fix what they know there will be a bad future if they don’t do something about it,” said Constantino. INQ

“Harvest Moon: Poems and Stories from the Edge of the Climate Crisis” is available at the subsidized price of P599 from agamagenda.com, milflorespublishing.com, Shopee, Lazada, Solidaridad Bookshop in Manila and Mt. Cloud Bookshop in Baguio City.