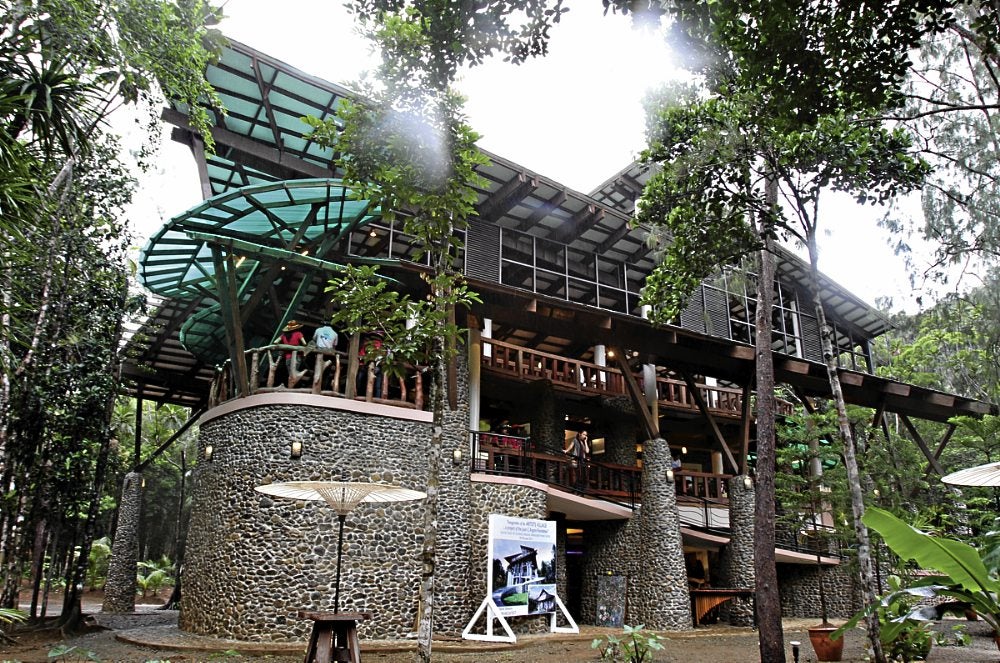 Baler in Aurora province is known for picturesque land and seascapes, and a rich cultural history. Brimming with natural beauty, one visit will show it’s the perfect place for, say, a strung-out artist to retreat to and soak up inspiration in.

This was just the thought that struck Sen. Edgardo Angara two years ago, as he surveyed a flat expanse of empty land with Danilo Silvestre, dean of the UP School of Architecture.

The secluded Dicasalarin Cove now houses the beginnings of the first Artists’ Village in the Philippines, a communal space where developing Filipino artists can gather together to learn from specialized workshops, or simply find solace away from the madding crowd of city life.

Spearheaded by Angara, the project was in the works for over two years, and its completion has been the “realization of a dream.” The generously sized longhouse, co-designed by Silvestre and Mexican Ambassador Tomas Calvillo Unna, stands just out of sight of the ocean shore, nestling on the mountainside and bordered by freshwater creeks.

The Artists’ Village is being heralded as a significant milestone in the growth of Philippine arts.

The Artists’ Village seeks to nurture artistic talents. Angara plans a gradual roll-out of services. While more lodgings are being constructed, the village will first be opened to locals, then eventually to artists from the rest of the country. Programs will be set up for artists from all disciplines, with an option to hire the facilities for a low fee.

Installation artist Junyee, who helped conceptualize aspects of the village, stressed the educational focus of the project: “We are going to have a program of residency; a program of grants; a program for workshops, festivals and lecture series. Any kind of thing that would expose, especially young artists, to what is going on in the contemporary arts scene.”

At one with nature

The airy, open long house is intended to be the main communal space in the village.

Silvestre said he tried to include an unfinished aspect to his work to encourage other artists to embrace their own creativity and to think up their personal additions to the space. “It’s really meant to inspire the artists to collaborate and contribute.”

Sloping, over-sized beams mimic the random placement of branches on a tree, while the curved walkways and staircases evoke images of roots and vines. Silvestre described the design concept as “an abstract translation of the physical environment.”

Silvestre added that the stones adorning accented pillars and the driftwood pieces used in the construction of some banisters were sourced from the site itself.

The lofty halls and slanted roofs were designed to allow visitors unobstructed views of the surroundings. The lush green faces of the mountainsides confront patrons on the third floor, and leafy branches are so close you are left with the feeling you can touch them if you lean far enough over the balcony.

Silvestre lamented the need for some glass panels to protect artworks should the loft be used as a gallery space, but the sparse frames are set far back from the platform, so this only minimally sacrifices the openness of the structure.

Junyee, Silvestre and Angara spoke of similar goals for the village. Junyee expressed pride at being a part of the conception of the village, describing it as an integral step in nurturing the arts in the Philippines.

He hoped it would provide “a refuge for the artists in order for their talent to be nurtured and to flourish, and a chance to interact with other artists.”

Silvestre was adamant that the Artists’ Village “will last longer than any of us.”

“You want to be part of history,” Silvestre said. “This may seem like a relatively small thing … but in terms of our culture and our spirit, as our artists, our musicians, our actors, our filmmakers, our dancers, our poets come here, write, produce, create, paint, sculpt … hundreds of years from now they can go back and they can say this is something that was built here [at the Aurora Artists’ Village], and that’s our legacy.”

The inauguration of the Artists’ Village promoted a message of preservation and development of Filipino cultural heritage. Angara was full of praise for the painters, musicians and dancers from the region who contributed to the inauguration ceremony.

On the bottom floor, attendees were greeted by a collection of culturally focused paintings by local artists. Brightly costumed Ilongot representatives performed a traditional courtship ritual for guests in the middle reception area. Junyee’s interactive installation of an artistic rainstick harked back to a traditional past blended with contemporary influences.

Having grown up in the region, Angara was notably reminiscent during the festivities, sharing stories from his youth about coming to Dicasalarin Cove with his barkada for picnics, bringing only a pack of rice and relying on fishing expeditions to provide the rest of the meal.