Love is in the air at Ballet Manila’s season-ender | Lifestyle.INQ ❮ ❯ 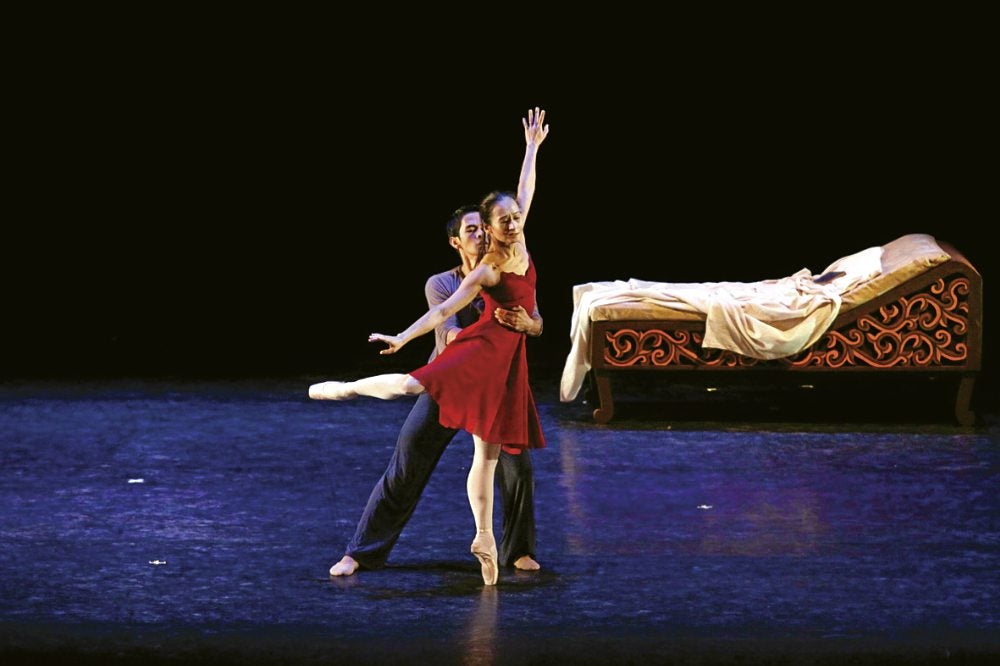 LISA Macuja-Elizalde and Rudy de Dios in “The Last Poem”

Love is in the air at Ballet Manila’s season-ender

“Lab” here could be taken two ways: as an alternate spelling for love, or as in “laboratory,” denoting a sense of experimentation that comes with all things new.

Except for one classical piece, all the numbers were receiving their Philippine premieres, and were on the subject of love and all the different emotions that come with it.

On opening night, the theater was half-full with children off on a visit to Star City. How did they take the sight of dancers writhing on stage in various stages of embrace?

“Lab Ko ’To” was a departure from Ballet Manila’s “Ballet and Ballads” concerts held usually in time for Valentine’s Day. The show was anchored on Manuel Molina’s monumental “Buenos Aires,” which lasts for almost an hour.

The company was supposed to premiere the piece in its Christmas concert, but it seemed inappropriate for the season. A ballet that is inspired by the Argentine tango, particularly the nuevo tango of Astor Piazzolla, and the politics of desire was more fitting for a show that was themed on the subject of love.

Molina’s “Buenos Aires” was not so much about Argentina or the tango, but more on the different ways men and women react to love. The 10 dances had the perfume of the milonga, but used it as springboard for a contemporary exploration that was truly dramatic.

Molina’s intent was not obvious from the start. The opening “Streets” recalled a barnyard dance where dancers changed partners in a pattern learned by rote. However, the following dances made clear his intention. The opening number served merely as an introduction to the mood the dance was supposed to create.

A handful of the dances in “Buenos Aires” explored this focus on desire among men and women.

In “Longings,” a woman (Lisa Macuja-Elizalde), fresh from the pampas, seeks out a partner, interfering with the affairs of couples, before finding a man of her own—although there is a hint of the otherworldly in the man she finds. Here, the musical cue, “Milonga del Angel,” hinted at the possibility that she found love with the Angel of Death.

In “The Rose,” a woman (Hana Oh) plays with the affections of three suitors (Arnulfo Andrade, Elpidio Magat and Harold Salgado), choosing none of them in the end.

In “Jilted Brides,” a rake (Nazer Salgado) gets his comeuppance as the women whose feelings he toyed with exact their revenge on him.

Some pieces were simply virtuoso pieces. In “The Picture,” three male dancers (Gerardo Francisco, Alvin Santos and Ricardo Mallari) play around in a seemingly comic number, just as in “The Champion” (Niño Guevarra and Rudy de Dios).

“Wings” saw Francisco literally flying in a joyful dance, while Sofia Sangco-Peralta and Nazer Salgado played the mismatched lovers in “The Passion.”

You can liken Molina’s “Buenos Aires” to fine wine: It is best savored sip by sip, not in one gulp.

Luna set the scene with the arrival of the babaylan. Carried on stage standing atop bamboo poles, she heralded the start of a ceremony that was to be held under the full moon. And then, the dancing started.

There was something elemental to the choreography as dancers twisted, gyrated and writhed on stage. Half of the time, the male and female dancers did not dance with each other, creating a tension that erupted when finally dancers came together in the finale.

Adding to the charged atmosphere was the live accompaniment by Kalayo. Armed with electric guitars, drums and percussion, the group gave “Alon ng Buwan” an earthiness that was simply energetic.

The other premieres during the concert were Francisco’s “Morions,” which won bronze at the 2011 Andong World Maskplay Contest; and Augustus “Bam” Damian III’s “The Last Poem.”

“Morions” is an athletic dance that fused ethnic movements with pantomime. Apart from Andong in South Korea, it has also been performed at the 2012 Ten Drum International Festival in Taiwan.

“The Last Poem” is a lyrical duet premised on a dying woman’s wish to hear her husband read to her her favorite poem. Macuja-Elizalde and De Dios performed it with dramatic conviction.

Opening the evening was the classical piece “Satanilla” with Oh and Harold Salgado in the pas de deux. The piece highlighted the athletic capabilities of Salgado as he leaped in the air in his solos, while Oh showed grace and balance in her lyrical solo. It was the perfect way to start a highly charged evening that was full of surprises.

Ballet Manila’s continuing collaboration with a number of choreographers only adds to the company’s repertoire of original pieces. The company’s ability to execute dances in a variety of styles, from classical ballet to contemporary dance, only proves that its dancers are among the most versatile in the country.