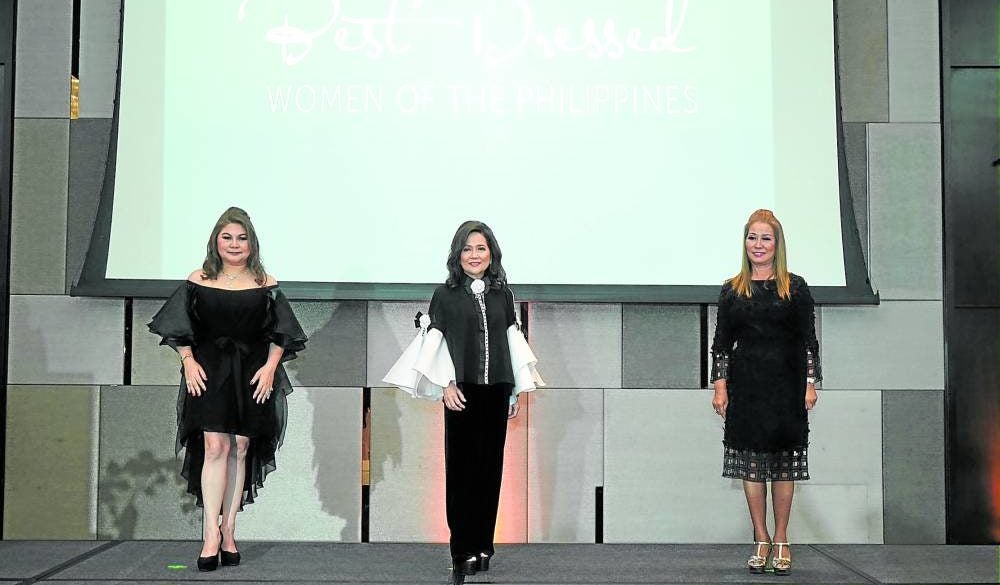 You know it’s a postpandemic world when the socialites are back in action.

At the New World Hotel ballroom on March 31, Agile Zamora and her bestie, paper entrepreneur Connie Haw, and socialite Connie Garcia flitted from table to table. On the other side of the venue, the grand dame of society chroniclers, Becky Garcia, her husband, Dr. George Sarakinis, and close friend/design consultant Cocoy Cordoba huddled in one table.

The occasion was the book launch of the Best Dressed Women of the Philippines (BDWP) 2021, the annual fundraising event for the Philippine Cancer Society (PCS).

Before the pandemic, Helen Ong, BDWP chairperson and Angola Consul, organized fashion shows featuring generous donors sashaying on the ramp. However, the intermittent lockdowns in the past two years drove the BDWP committee to transform the charity fashion show into a book, highlighting the women and men with big hearts and deep pockets.

They have been supporting the PCS’ efforts in providing assistance to indigent cancer patients.

This year’s coffee-table book, “Giving Hearts,” written and edited by Maria Rosa “Bing” Carreon, presents six women on the front cover and a “Hong Kong-ite” on the back. The book consists of long lists of givers in several categories outside of the Best Dressed, such as Women of Purpose and Social Responsibility, Exemplary Men of Vision and Integrity, to name a few. You can figure out the major benefactors from their prominent layout.

The lists reflect the new guard—successful entrepreneurs. One of the cover ladies is Katrina Ponce Enrile. As president and chief executive officer of Jaka Investment Corp., she put the family-owned conglomerate back on the rails and launched a food brand, Delimondo.

Another cover girl, Rosalind Wee, founder and director of Marine Resources Development Corp., developed carrageenan, a seaweed additive, as a business to help farmers. In 2009, she made news when she became the Pearl Buck International Woman of the Year for her humanitarian services such as relief missions and livelihood programs for women. Wee is active in the Ballet Philippines Foundation (BPF).

Virginia Lane, CEO of the Lane Moving Company, has always been lauded for cooperation in arts patronage and medical missions. She is a board member of BPF and Johann Strauss Society of the Philippines Inc.

Marichelle “Mache” Ackerman, co-owner of St. James College System, is married to David Ackerman, head of the country’s largest stock brokerage firm. A life coach, she has written a book, “Explore the Deepest Essence,” and conducted an online show, “Walk the Talk.” She organized and livelihood programs community pantries with the Rotary Club, and collaborated with social entrepreneur Illac Diaz in bringing solar lamps in bottles to remote communities.

Carol Mercado, president and CEO of Mercado Builders, is involved with the Rotary Club of Makati Premier. She helped get grants for other clubs to fund their projects, and initiated Southeast Asia’s first eye bank. Her main contribution was to set up two PCS mobile clinics that conduct breast screening and cervical exams in indigent neighborhoods.

Edna Sutter, president of real estate developer, DDC Land Inc., has been active with the Rotary. She led the Rotary Presidential Conference 2021 in the Asia Pacific Region.

Catherine Luk, restaurateur, visual artist and head of an investment company, dominates the book cover. In Hong Kong, Luk has been supporting the arts and breast cancer initiatives in Hong Kong and the PCS.

At the launch, Sheila Romero, vice chair of Air Asia Philippines and a fashion plate, is this year’s Woman of Courage and Generosity. She shared her experiences as a breast cancer survivor and the work of her foundation, I Want to Share, which supports the children’s award of the Hematology-Oncology Department of the Philippine General Hospital.

This year’s batch of BDWP goes as far as the South. Educator Joji Ilagan Bian is well-known in Mindanao for Joji Ilagan International Schools, which specializes in hospitality. Carla del Prado is a fixture in Cebu’s social scene.

Then there are socialites Elaine Kintanar and Catherine Valencia, the latter the owner of the namesake aesthetic clinic and a sponsor of polo games.

Social entrepreneur Georgina Ty is president of Agsam Fern accessories company. The brand made news when its products were featured in the hit TV show “Broken Marriage Vow.”

Property heiress and patroness Marivic Vazquez is the only old guard in the new list.

Billionaire Ramon Ang, president and vice chair of San Miguel conglomerate, was given a special title, Remarkable Man of Leadership with a Heart, for his company’s continuous contribution to PCS’ endeavors.

At this writing, the BDWP initiative has already raised P13 million and still counting, says Ong. Although the book fetches P4,000, people have been buying to help PCS. The BDWP committee solicits donations ranging from P50,000 to P500,000.

Agnes Huibonhoa, Gambia Consul and longtime member of the BDWP committee, says detractors have often questioned them about the choices of the “Best Dressed Women.” In the first few years of BDWP, the list included the glam set from the old guard. But the glam list has been exhausted and its donors felt the fatigue. The committee has reached out to entrepreneurs involved in charities and civic projects.

They are in the league of Johnny and Aida Cobankiat, owners of Ace Hardware, one of the largest chain stores.

Huibonhoa explains that BDWP committee’s priority is to find ways to aid PCS. “We want to sustain the maintenance of the cancer patients. They undergo treatments and psychological therapy as well. We didn’t want them to be left in the dark during the pandemic. The book was the way to get more patronage.” —CONTRIBUTED