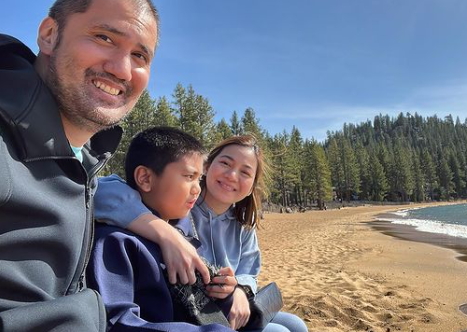 Kyla relishes similarities of husband Rich Alvarez and their son

While on vacation in the United States, Kyla recalled the day when she and the former professional basketball player got married in a civil ceremony, as per her Instagram page yesterday, April 20, where she showed a photo of them in South Lake Tahoe.

“11 years ago, same month, we decided to get married secretly. We went to Singapore after our civil wedding. It was the first time we ever went anywhere alone,” she recalled.

Alvarez’ love for Kyla has not diminished over the years after their marriage. She affirmed Rich for taking care of her, for being a true gentleman, and not even allowing her to push or carry any of their luggage during their U.S. trip.

The singer also observed that same trait from her son Toby who would not even let her carry a bottle of water.

“You guys are funny. Your son is the way he is because of you. He sees the way you treat me and does the same as you. I don’t know what I did to deserve such a loving husband and son. I love you both so much! Happy 11 years sweetheart @rich_alvarez,” she said.

Kyla and Rich were married first in civil rites in April 2011, and months later in a church wedding, in the same year. Two years later, Kyla gave birth to Toby Elsiah. JB