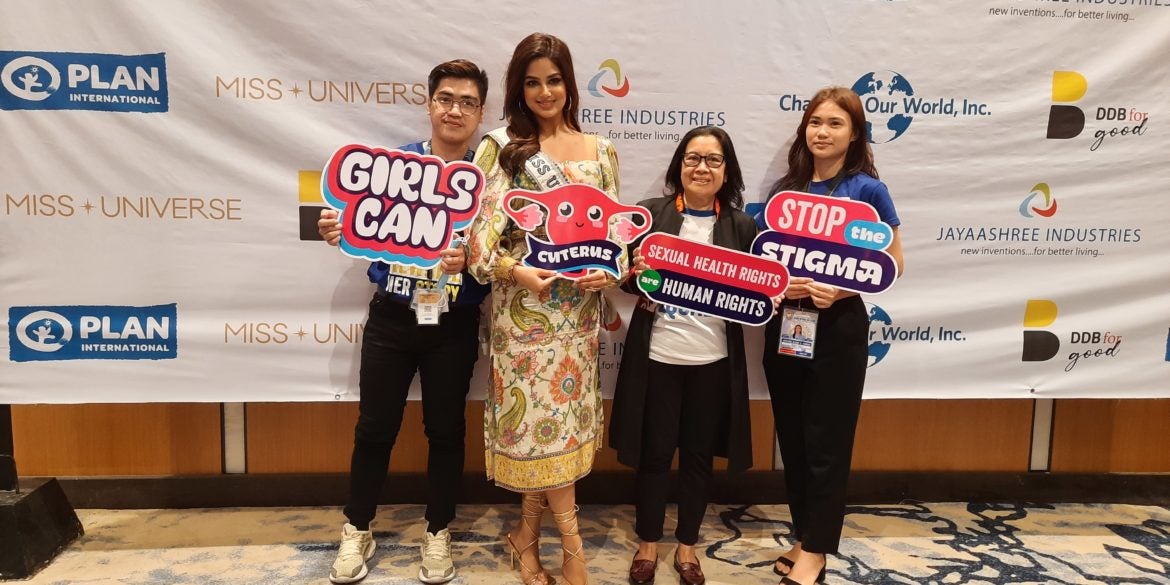 MANILA, Philippines–When Indian beauty Harnaaz Sandhu participated in the 2021 Miss Universe pageant in Israel in December, one of the issues she raised was menstrual equity. Now that she has captured the crown and gained a bigger platform, she brings her advocacy to the Philippines where she hopes to normalize menstruation as a topic of conversation.

“We as women menstruate every month, and it is a normal part of our body,” Sandhu said at the “Period Pains: Tackling the Challenges of Menstrual Equity” workshop organized by the non-profit organization Plan International Philippines at the Citadines Bay City Manila in Pasay City on April 25.

Menstrual equity, Sandhu explained, is having affordable access to safe menstrual products and educating the people about menstruation. She said having a gynecologist for a mother has made her aware of the issue at an early age.

“Some people are uncomfortable to talk about it, or ask for products,” the actress-beauty queen lamented. She also cited situations in poor communities where women were made to choose between food and hygiene, which further aggravates the situation.

During the event, about 30 young participants from different parts of the country presented the outputs of their two-day workshop to the global beauty queen, who in turn shared how impressed she was with the presentations and encouraged the youth to further expand the conversation on menstrual equity.

Sandhu confessed that she found it uncomfortable talking about menstruation when she was still in school. And now that she has the platform that gives her a global audience, she appealed to the people to “normalize” such conversations.

“There are women who don’t have access to pads, who are living in such a stereotype mindset of people around them, where teaching menstruation is a taboo. Let’s talk about it,” she said.

She started her keynote address by asking who among those in the ballroom are having their period at the moment, and admitted she is on her period that day.

“That is not an excuse for us that we cannot do something. We are unstoppable. We bleed every month and that should not come in between our work to achieving our goals,” Sandhu explained.

When the Inquirer asked her when she felt comfortable talking about menstruation, she said she just knew when the time came.

“I think we all go through a lot of peer pressure, and even i was going through IT during my pre-teens. I realized that talking about your health, talking about something which is natural is very important to educate yourself and everyone around you,” Sandhu shared.

She said menstruation is “not something you should run away from” and thanked organizations such a Plan International that supports menstrual equity.

Sandhu, meanwhile shared that Plan International, in partnership with DDB for Good, Changing Our World Inc. Jayaashree Industries, and the Miss Universe Organization, will donate a menstrual pad machine that will not only make sanitary pads more accessible and affordable, but will also provide livelihood to citizens.

The third Miss Universe winner from India is also in the country to sit as one of the judges in the 2022 Miss Universe Philippines pageant on April 30 at the Mall of Asia Arena in Pasay City.

The national competition will also have three other Miss Universe winners—homegrown beauty Pia Wurtzbach and her successors Iris Mittenaere from France and Demi-Leigh Nel-Peters from South Africa—who will serve as hosts.