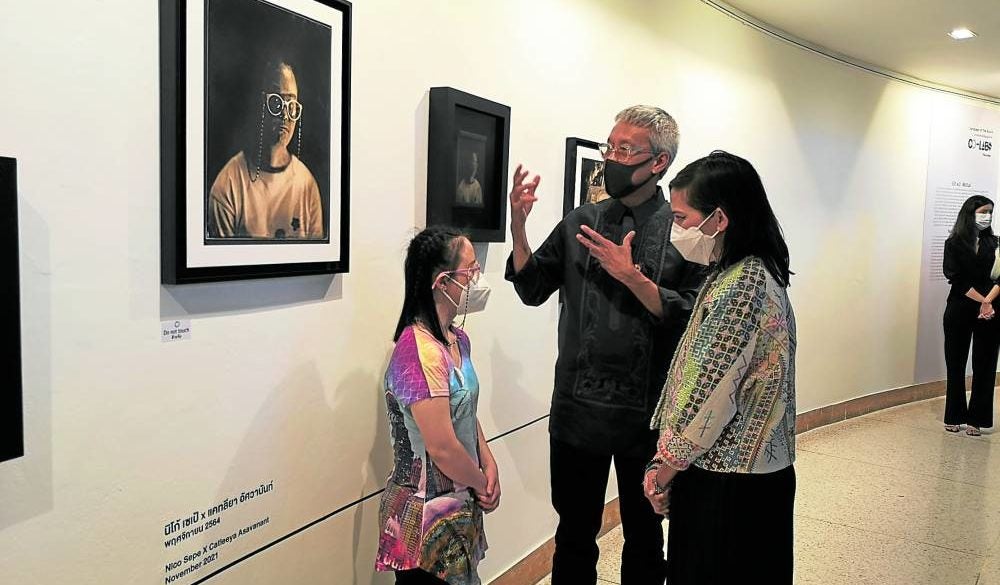 Filipino photog shines light on Down syndrome in Bangkok show

BANGKOK—It is not very often that a photo exhibit by a foreigner is graced by a member of the royal family here in Thailand.

Filipino photographer Nico Sepe got this rare privilege when his “Co-Labs: The Collaboration” photo exhibit was officially opened by Than Phu Ying Sirikitiya Jensen, a granddaughter of the late King Bhumibol Adulyadej and a niece of reigning King Vajiralongkorn.

Khun Sirikitiya is an avid photographer like her grandfather. She also curated a glass plate photography exhibit in 2020 at Bangkok Art & Culture Centre (BACC).

Sepe’s photo exhibit was held at BACC and ran until April 24. The opening on March 21 coincided with World Down Syndrome Day.

“Co-Labs” was a collaboration between Sepe and 10 Thai artists of different mediums. Sepe photographed each artist using the wet plate collodion process, also known as ambrotype, an early type of photography using glass as negative dating back to 1854. His subjects were artists with special needs.

Sepe began his photography journey in the late 1970s documenting lives in the underground movement and the fall of the Marcos dictatorship. He worked mostly on commissioned assignments by nongovernment organizations and even self-funded some of his documentary projects.

Sepe was cofounder of Centerphoto (Philippine Center of Photojournalists) and had worked for newspapers and magazines as well as on several book projects, including “Philippines: A Journey through the Archipelago,” the Philippine Navy’s “Tides of Change” and the University of the Philippines’ “Sipat,” to name a few. He has had several group exhibitions and one-man shows. He is based in Bangkok, practicing and teaching the wet plate collodion process.

Sepe started the “Co-Labs” project last year as part of the “Language of the Soul” ongoing series of exhibitions in BACC, to highlight the efforts and talents of artists with Down syndrome. It also aimed to expand the new perspective on art and to encourage families to develop the full potential of people with special needs.

The collaboration was a challenging endeavor made even more complicated by the COVID-19 lockdowns. But when Sepe found an opening in October, he immediately coordinated with Rainbow Room Foundation, a special needs awareness center, and BACC to resume the project.

It was a challenging undertaking, but as the exhibit poster put it, “when the mechanical and the human factors harmonize, the results are magic.”

In his speech, Sepe said, “We choose this medium because it has historical relevance. This wet plate collodion became popular in mid-19th century (1850s) and 20 years after came the discovery of Down syndrome by English physician John Langdon Down and they made use of wet plate to record the people or patients they were handling.”

Sepe emphasized the need to raise the awareness and recognition of people with special needs. “This is a kind of tribute to them,” he said. “This is not just art for art’s sake, but this is more to raise awareness and to give importance to people who have this condition.”

He dedicated the project to to his nephew, Emilio Sepe, who has Down syndrome. “This is beauty without vanity,” Sepe said. —CONTRIBUTED