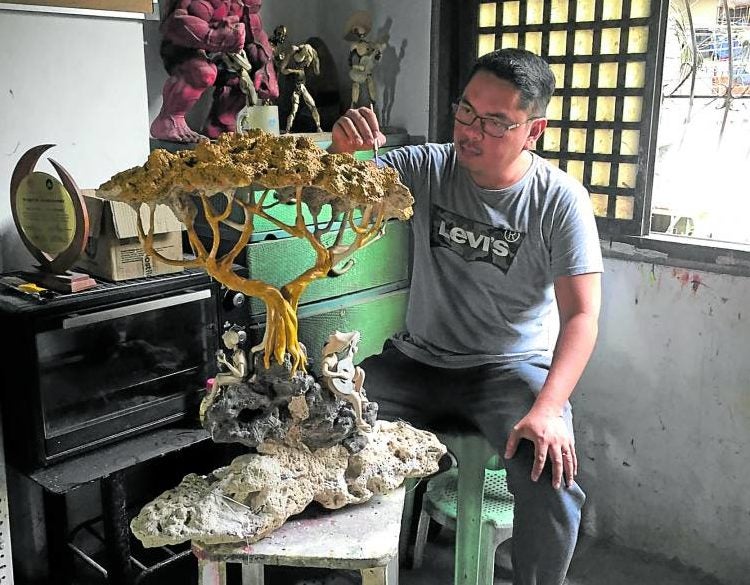 Art critic Cid Reyes once described Glenn Cagandahan’s works as done with “fantastical visions,” with diverse themes from Philippine personages and legends to contemporary culture, which are often executed into steampunk assemblages, in that style that combines history and technology inspired by science fiction.

“From out of an assembly line of mechanical parts, dazzling in their fractal repetition at once an abstraction and representation of Man as Machine, or The Machine as Monster that gnaws at man’s soul, Glenn Cagandahan proffers his newfound vision of art—species in itself of theatrical choreography in the way the molded figures, with their smooth, mask-like faces, attach space with their dramatic stances,” said Reyes.

Cagandahan, a Paete, Laguna, native, is a product of the University of the Philippines (UP) College of Fine Arts who first tried his hand at sculptural works through the restoration of public sculptures inside UP, which were assigned to him and his fellow students then by their professor Ginny Dandan.

This exposure, he said, led him to discover a method of restoring damaged wooden sculptures by combining Epoxy clay and sawdust, the same materials he used when he ventured into the world of visual art close to 20 years ago.

Since then, Cagandahan’s works expanded from wooden sculptures to mixed media and assemblages. He likes to execute works related to the Filipinos’ everyday life, family scenes and relationships.

His oeuvre also includes those with religious themes mainly because of his Christian faith, being a son of a Christian pastor and a pastor himself.

His art is definitely Filipino, and most people can identify and relate to his award-winning works.

“It’s Filipino simply because my art is rooted in my experience and interaction with my surroundings, people, cultures and beliefs,” he said, adding he is always inspired in his craft by God, country and family.

“I am a probinsiyano (from the province), so this reflects in my works, plus I am also a musician and a pastor. That’s why my sculptures depict music and spirituality,” he explained.

He lists master carver Luis Ac-ac and the famed Michael Cacnio as his local influences, while the French Auguste Rodin, considered as the father of modern sculpture, and the great Michelangelo are the international artists who influenced him and his works.

For Cagandahan, it is important to “live your life in pursuing your passion, since it is the only way you will live. Art is like breathing because if you don’t breathe, you die,” he said, saying it is the “same thing with art, since if you don’t do art as an artist, that’s the end of it!”

For his works, he said he does not want to be boxed in, as he does not stop exploring other themes and skills for his chosen field of endeavor. “I want to continuously evolve in subjects and techniques as I traverse in my career,” he said.

That career of close to two decades has earned a number of awards for Cagandahan. He placed second for his work “Paul and Silas” during the 2006 edition of the Art Association of the Philippines Annual Art Competition, the same event where his other work “Pagdagit” was cited with an honorable mention in 2004. He was also given honorable mention awards in the same contest in 2005 and 2007 for his works “Gomburza” and “Poseidon,” respectively.

The Foreign Service Institute (FSI) of the Department of Foreign Affairs (DFA) published a book on him titled “Future Perfect.”

It is part of FSI’s pivot to Philippine arts, culture and heritage promotion which started last year as part of the DFA’s push for public and cultural diplomacy.

In the book, Foreign Secretary Teodoro Locsin Jr. said, “Showcasing artistic talent and heritage should be a main part of diplomacy” as “sometimes, it is easier to foster understanding in the vivid silence of a painting or a compressed action of a sculpture than with words and phrases, and in touching the deep places all humans have in common, art compresses experience; discloses divides; renders differences trivial.” —CONTRIBUTED