The Comedy of the Well-Mannered | Lifestyle.INQ ❮ ❯ 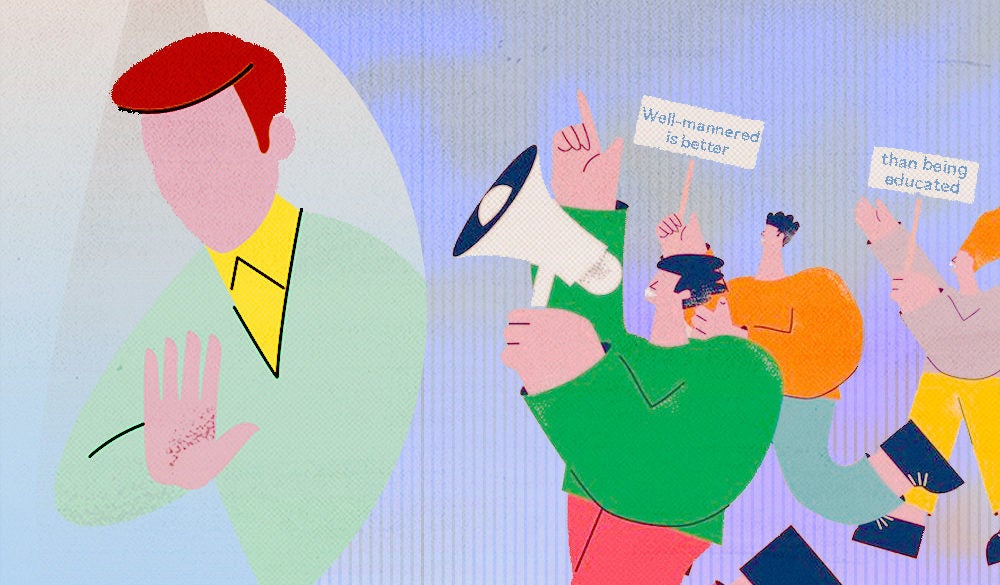 “Well-mannered is better than educated,” Shaira said in defense of Bongbong Marcos, the presidential candidate she supported for the recently-concluded elections. It was a statement precisely aligned with the narrative that Marcos supporters have been pushing as of late: that the Kakampinks are toxic, and the attitude of vice-president Leni Robredo’s followers was what caused her loss.

While I’m betting on the massive and sustained disinformation as the reason behind the victory, I will leave that discussion for another day. Shaira’s statement has been stuck in my head for days now, and it reminded me of a scene in Bong Joon-ho’s Parasite  when Kita-ek tells his spouse, “They are rich but still nice,” to which his partner Chung-sook rebuts: “They are nice because they are rich.”

I think politeness is great. A functioning society requires social graces, acts of kindness––a general consideration for the welfare of our community and the individuals we interact with regularly. But these performances are predicated on the condition that society should function for the people in it; otherwise, “good manners” is but a club used to beat people into submitting to a society that does not serve them at all.

Case in point: the LGBT+ community. As I was growing up, my elders drilled in my head that queer people were not only sinful but were indecent and lewd. Our sexual orientation, gender identities, and expression were transgressive; our mere existence was an offense to the strict rules of our polite patriarchal society that valorized the macho man and the virginal woman.

Movements aren’t won by polite people: while the faces of movements are usually meek and diplomatic, social upheavals cannot happen without protest and agitation. The call for LGBT+ rights around the world was catalyzed by queer people like Marsha P. Johnson who fought back against the abusive police during the 1969 Stonewall riots. Our country’s independence couldn’t have happened by gentle pleas to our colonizers to let us go. And as peaceful as the first People Power movement is touted to be, the blood that was shed by activists like Archimedes Trajano, Edgar Jopson, and Liliosa Hilao was what inspired people to oust a greedy dictator and his family from office.

Respectability politics only reinforces the status quo, and calls for respect by people in power only to serve those who have the power, to begin with, and never the ones who are being crushed by the current system. And this is why dissent and activism are necessary: we must be able to call out people who have power whenever they abuse their positions. (This is also why people in power shouldn’t act like little brats throwing a tantrum whenever they’re being called out: heavy will be the head that wishes to wear the crown.)

In an era when organized disinformation twists and bends history to serve an unrepentant, power-hungry elite, to choose respectability over knowledge is to say: that it is better to toe the line than to speak truth to power. It is defeat reminiscent of 1984’s Winston finally acquiescing and saying: the struggle is finished, he had won the victory against himself, he had loved Big Brother.

This month, we celebrate the International Day of Homophobia, Biphobia, and Transphobia––a day that brings awareness to the continued violence and oppression of LGBT+ people across the world. There are still 68 countries that criminalize same-sex relations, and at least nine that police gender expression. In the Philippines, an anti-discrimination bill that is meant to protect LGBT+ lives continues to be blocked by lawmakers, as our deaths are used as bargaining chips by our political leaders.

Human rights matter. History matters. Facts matter. These are the things we need to teach and communicate well. When you choose to obsess about the delivery but refuse to listen to the truth in the message, your priorities are horribly misplaced.

Just say you want your ignorance coddled and go.