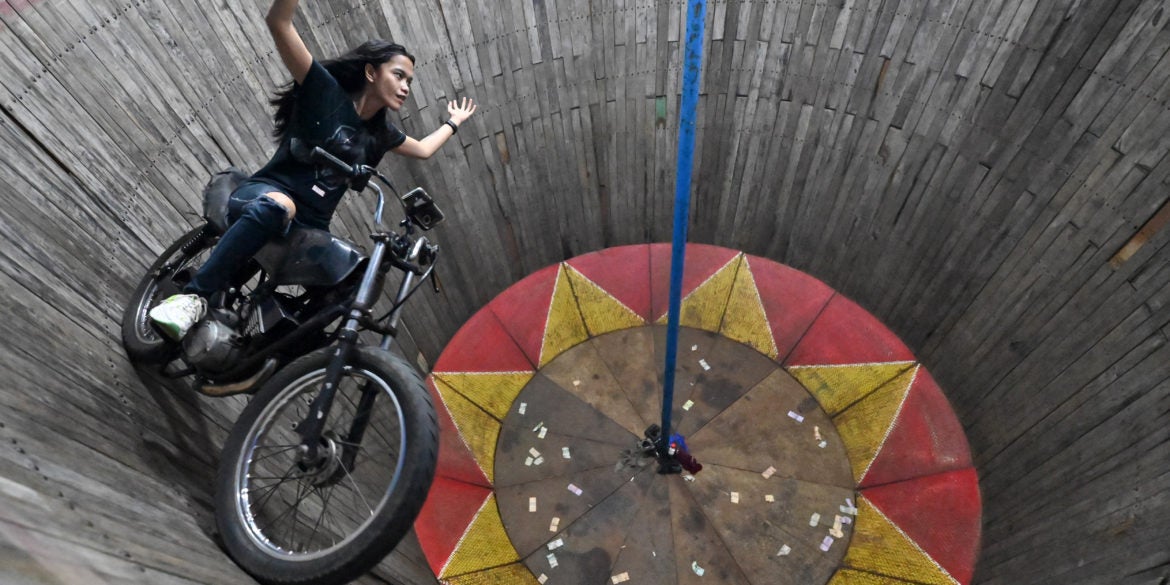 This photo taken on April 30, 2022 shows daredevil Karmila Purba, a rider of the "wall of death", locally known as a "Tong Setan", performing inside a six-meter high wall at a night carnival in Bogor. (Photo by ADEK BERRY / AFP)

‘Princess of the Wall of Death’: Indonesian daredevil defies gravity and stereotypes

Jakarta, Indonesia — Karmila Purba revs her motorbike under the lights of an Indonesian night carnival and rides up horizontally inside a wooden cylinder called Satan’s Barrel, drawing gasps from spectators looking down into the drum.

With a smile on her face, Purba delights onlookers as she fearlessly pings around the bowl in Bogor, West Java, spreading her arms to collect tips waved by those above.

The gravity-defying daredevil is among a handful of women that perform the stunt in Indonesia, zipping around a structure more commonly known as the “Wall of Death.”

Women becoming “Wall of Death” riders is “extremely rare,” the 23-year-old told AFP before the show.

“When I started there was no one else… so I wanted to be something different, doing something that no one else was doing.”

For decades, the Satan’s Barrel – or “Tong Setan” – has been the main attraction at traveling fun fairs in Indonesia, particularly in rural areas where there are few options for affordable entertainment.

Using centrifugal force, riders sling their bikes around the motordrome at high speeds without protective gear as the smell of rubber fills the air.

Purba came from humble beginnings, earning a meager living as a street busker on the island of Sumatra in western Indonesia before switching jobs eight years ago for a better income of around 6 million rupiah ($410) a month.

But at the beginning of her daredevil journey, she faced questions about her career choice.

“People were saying to me, ‘you are a woman, why do you do something like that? It’s not for females’,” she said.

“There was a lot of criticism.”

Fans eventually began to praise Purba, giving her the nickname “the Princess of the Wall of Death.”

Now she is one of the star acts of the carnival.

“(A) female wall of death rider is very interesting and has become the main attraction in this night market because people are curious,” spectator Sumarno told AFP while watching the show.

“They didn’t believe a woman could do something extreme like that.”