A face-off between Elmer Dumlao and his art | Lifestyle.INQ ❮ ❯ 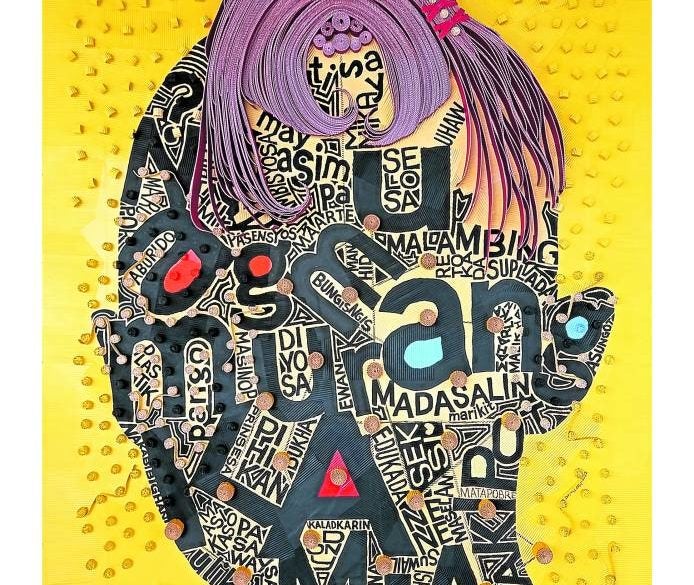 A face-off between Elmer Dumlao and his art

“There will be time, there will be time / To prepare a face to meet the faces that you meet …” Thus intoned the mournful voice of the greatest poet of the 20th century, T.S. Eliot.

From this deep insight into the nature of man emerges the significance of the human visage, the face, as the ultimate signifier of our emotions, sentiments and character. This revelation is mined in Elmer Dumlao’s exhibition, titled “Kamukhamo,” organized by The Artologist Gallery at ArtistSpace, running until June 11.

The fact is, face reading, like the study of body language—or, for that matter, graphology, the analysis of handwriting—has become a kind of science, used even by certain government agencies, as a means of profiling an individual. As psychologists have confirmed, much of human communication is nonverbal.

Figuratively, a person intentionally puts on a mask to conceal his true feelings. Recall what Oscar Wilde once wrote: “A man’s face is his autobiography. A woman’s face is her work of fiction …” In her daily ritual of applying her makeup, a woman is creating her own self-portrait.

Dumlao, however, is no police investigator, profiler or psychologist. But as an artist, neither did he stoop down to the level of the illustrational, like a picture accompanying a magazine article or an instructional manual.

Instead, Dumlao mobilized his entire graphic armory of typography, identifying by name all the various words describing the myriad character and personality traits of the Filipino. In the vernacular, the words have a stark, acidic, stinging and, yes—an in-your-face, expletive force: brusko, tarantado, torpe, tanga, doblekara, traydor, maangas, barumbado, pihikan, bastos, suplada, mal educado. To the Filipino ear, such words are venomous, vicious, wounding.

Within the contour of the human visage, Dumlao scatters these upbraiding descriptive words in the most elegant, rigorous and polished execution, sleek and snappy and punctiliously rendered, as if directed by an avenging angel of consumerist culture. The works are mostly in mixed media, collaged with strips of natural materials or esoteric psychic reading cards. These three-dimensional objects function as commentaries on the work or references to their source.

For instance, in “Nagmumurang Kamias,” Dumlao adverts to the image of an old man attired like a punk, with amusing strips of materials curled and ribboned, evoking a grunge hipster. In “Workaholic,” the surface is studded with used paper coffee cups, complete with visible sediments of the ground beans. In “Salamin,” the only work that identifies the positive, Dumlao inscribes such words as “swerte,” “kaaya-aya,” “bongga,” “maalindog,” “mabait.”

But what brings this work to life is the ingratiating presence of rounded mirrors—upon which the viewer, like Narcissus, can delight in seeing his or her own face. The viewer then becomes an integral part of an interactive work. It is a good bet that no one will be displeased upon seeing one’s reflection, seen in positive light.

Intriguingly, Dumlao tapped the viewer’s already encoded, brain-wired look one associates with such an individual. The word is an impelling trigger that instantly summons to mind an impression of an individual—whether drawn from personal experience, the movies, or one’s dreams—who projects such a quality or character.

Human nature is such that it has been invested with the faculty of instinct, a feeling that something is the case, whether based on fact or not. To be sure, instinct is not infallible, sometimes turning out to be mere suspicion, but we base our perception, our reality, on our sixth sense, our intuition, a powerful force that allows us to make better decisions in life.

“Kamukhamo” is a celebratory homecoming for Dumlao after the couple of years of lockdown, during which, incidentally, his father sadly passed away in his absence.

Based in Jordan for over two decades, Dumlao was creative director of an advertising agency, founded and headed by his boss, who was a distant relative of the king of Jordan. His boss was eventually asked by the king of Jordan to be the chief of the protocols office, where Dumlao now works.

Indeed, through this connection, Dumlao has been commissioned to do the portraits of King Abdullah I, the crown prince of Jordan, and the late Prince Hussein. In Jordan, Dumlao has held 11 solo shows. —CONTRIBUTED