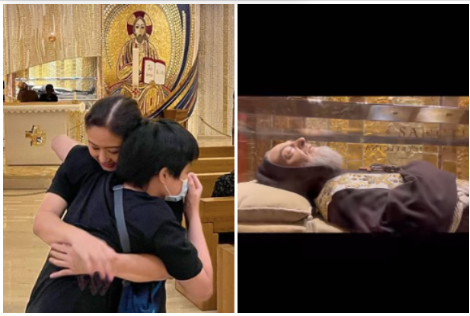 Christine Bersola with son Nio at the tomb of Padre Pio. Image: Instagram/@christinebbabao

As a devotee of Padre Pio, former broadcaster Christine Bersola-Babao has visited the tomb of the popular Italian saint many times, through pilgrimages.

Bersola recalled the numerous occasions she visited Padre Pio in an Instagram post today, May 29, in celebration of the saint’s birthday last May 25. She shared some photos showing herself with her son Nio, taken at the saint’s tomb in Italy.

It was in 2009 where Bersola visited the tomb of Padre Pio for the first time during a pilgrimage.

“I was 13 weeks pregnant with Nio. Those who have followed my posts [would] already know that thru Saint Pio’s intercession (it was the late @therealrickylo who introduced us to Saint Pio @stpiocentreph) my prayers were granted by God- i got pregnant with our 2nd child, Nio,” she said.

Bersola recalled that her son Nio was already in her tummy in 2009 when she saw the saint’s tomb. She thus noted that technically, “kasama ko na [s’ya]” (he was already with me), referring to her son.

Two years later, Bersola and her family went back to San Giovanni Rotondo in Italy.

“This time Anya who was only seven years old then, was the one who joined us on a San Pio Pilgrimage. Nio was still a baby and stayed back home,” she recalled.

In February 2018, Bersola again went on a Padre Pio pilgrimage during winter, with other fellow Filipino Catholics. This year, once more, she was back at St. Pio.

“We’re back here. [Two] years into this pandemic, and we finally get to travel again as a family. This time, Nio is already 12 [years] old, and finally gets to see Saint Pio’s body (tomb) up close,” she noted. “I was so touched I hugged Nio tight so many many times. Just being so thankful. Thank you Lord for the blessings.” JB