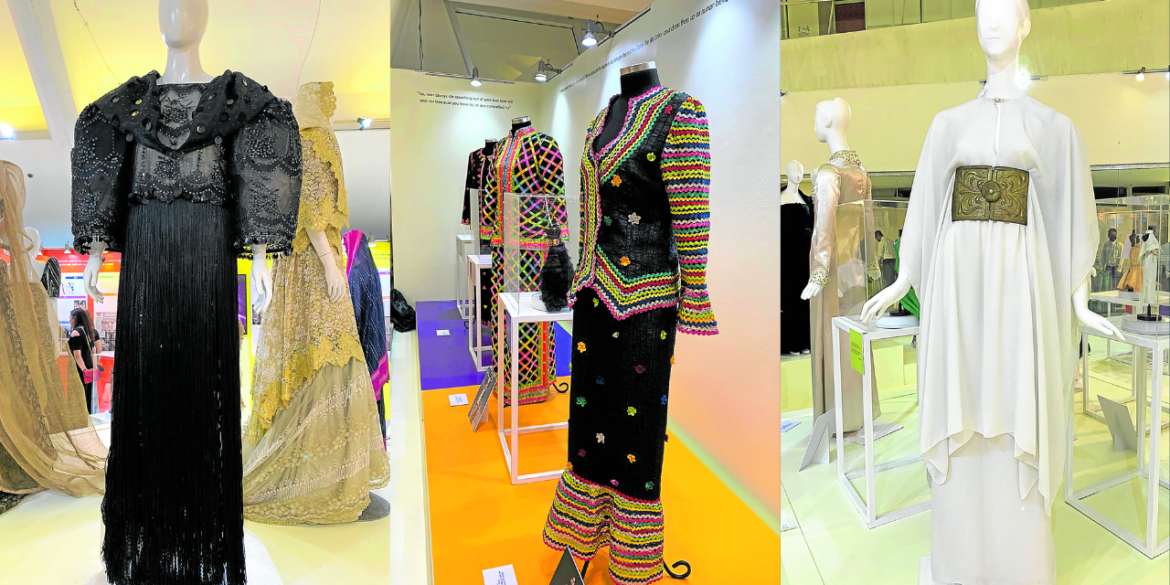 LEFT TO RIGHT: Black three-piece beaded and fringed Maria Clara gown, Farrales was not one to shy away from embellishments, as seen in these outfits with rickrack details, and White tunic-style dress cinched at the waist with belt with repoussé metalwork

Designer Ben Farrales, known affectionately as “Mang Ben,” was one of the country’s top dressmakers and a favorite of Manila’s swans until his death at age 88 on March 6, 2021. A monthslong exhibit featuring all 40 of the dresses and gowns that his family gifted to the College of Saint Benilde is ongoing at the school’s design and arts campus in Manila.

During the opening night held last week, guests were treated to a showcase of the designer’s creations that included several terno and kimona, as well as some of his jewel-toned Mindanao-inspired pieces. Farrales and Mindanao fashion were inextricably linked because he grew up in his sister’s house in Cotabato, where he saw women proudly wearing their malong and other traditional clothing.

It’s fitting that an exhibit featuring some of the designs of the “dean of Philippine fashion” is being staged in a school where students in the Fashion Design and Merchandising program were chosen to participate. From the 80 sophomores, half were selected by a panel. Each student was then tasked to come up with a miniature dress inspired by one of the 40 outfits on display.

“Given the pandemic restrictions at the time, everything was conducted online,” curator Gerry Torres told Lifestyle.

Apart from the clothes, the school had also been gifted bolts of fabric, buttons and notions that Farrales had kept in storage. Before they could make their doll-sized designs, the students remotely browsed through the materials available. Everything the school received had been itemized so they only needed to choose which fabric they wanted before 1 meter was cut and sent to them.“This required a lot of logistical preparation, since many of the students had moved back to their provinces or were based abroad during the pandemic. We had to send all the materials to them, mentor them remotely and have the finished items picked up and brought back to the school,” Torres said.

The result is the “[email protected]” exhibit where the students’ efforts are displayed on 16-inch-high dress forms next to the designer’s creations mounted on plain mannequins.

Torres admitted that the school’s collection is a small sample of Farrales’ oeuvre as “he did more than 200 shows and countless couture pieces in his long and productive career. Yet what we have is adequate proof of his high artistry, his agility in evolving his style, his genius of form and construction, and the meticulous attention to detail he gave to his creations.”

The oldest piece on display is a ball gown made of sinamay and raffia, worn by Farrales’ favorite model Bambi Lammoglia to a ball in Malacañang during the time of President Carlos Garcia. There are also examples that bear the influence of Mindanao, like several malong shot with gold and silver thread, their hems stamped with repeating patterns.

For Br. Edmundo “Dodo” Fernandez, FSC, president of both De La Salle-College of Saint Benilde and La Salle Greenhills, those that caught his eye when he walked through the exhibit were the black Nehru-collared blouse with multicolored diagonal ribbons, the orange and black banig mat weave gown, and the three Maria Clara gowns.

“Much has been written about Farrales’ intentional use of indigenous, regional designs in his creations. He was doing this long before Yves Saint Laurent. In this way he spotlighted and highlighted our regional cultures and designs,” Fernandez said at the opening.Doll-sized

Doll designer Cholo Ayuyao (@cholodollcouturephilippines on Instagram), the guest judge on the panel that helped choose the students, was instrumental in sourcing the miniature dress forms.

“The forms were actually created by a friend using general measurements from dolls in the 1:4 scale or roughly 16 inches tall,” Ayuyao said. He initially had them made for his personal use, but when the project came in, his friend ended up mass producing them for the school.

Ayuyao is known for his meticulous attention to detail when he crafts his doll-sized gowns. In an interview with Lifestyle, he said he was “concerned” about the students’ workmanship since the art is practically new. “Online classes and creative tactile artistic work aren’t really the best combination, to be honest. Human-scale fabrics behave so differently on doll scale, and require much tweaking as you learn the process,” he said.

Still, some of the students’ efforts were commendable and Torres is hopeful that Farrales would have been pleased. “Mang Ben was a tireless supporter of young talent in the field of fashion, and would have been happy to see that his work lives on in the designs of the next generation of Filipino fashion designers,” Torres said in his show notes.