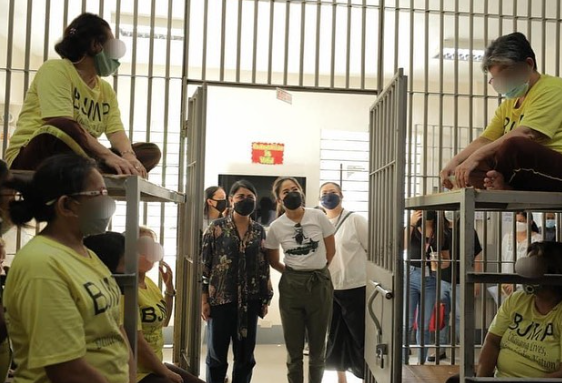 TV host Gretchen Ho cannot help but be amazed at how election tarpaulins are creatively turned into useful tote bags by Persons Deprived of Liberty (PDL) in Quezon City.

“When women come together, a lot of good things can happen,” she said in her Instagram page last Friday, June 3.

“Ever wonder where election tarps go? Some become ecobags [and] houseware, while some get upcycled into different plastic products such as ecobricks and monobloc chairs,” she added. “That’s thanks to renowned designer @ZarahJuan who has lent her name, craft and training to these bags that our PDLs will be producing.”

Ho mentioned that a huge bulk of election tarpaulins in Quezon City has reached over 70 tons.

But Ho also believes that “there’s opportunity in what seems to be garbage,” which is why she is all praises for the tarp-to-bags project and also the partners behind it.

“@sparkphilippines aims to bring livelihood to these PDLs from the Quezon City Jail, and in turn help out in the QC Gov’s environmental sustainability efforts, as these tarps are non-biodegradable,” she said. “Of course, there’s preferential option for women as the mayor of QC is a woman hahaha @mayorjoybelmonte.”

What is even more amazing, according to SPARK Philippines founder Maica Teves, is that the designer tote bags “will be ready by the 3rd week of June, and might be sold in SM & Robinsons department stores! Bought in bulk too by Zarah and the German Embassy with @laurebeaufils.”