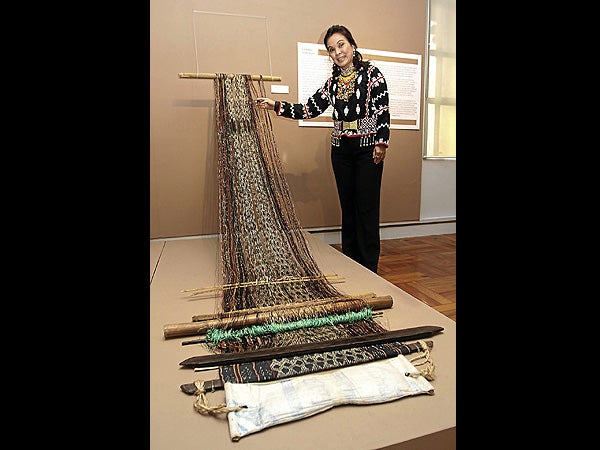 OUR VERY OWN. Behind the first permanent exhibit of Philippine indigenous fabrics at the National Museum is Sen. Loren Legarda. LYN RILLON

MANILA, Philippines—The first permanent exhibit of Philippine fabrics is now open at the National Museum and behind it is Sen. Loren Legarda, who has merged her advocacy for the environment with her passion for fashion to put up “Hibla ng Lahing Pilipino: Traditional Philippine Textile Gallery.”

Although National Museum director Dr. Jeremy Barns and technical adviser Dr. Ana Maria Theresa P. Labrador were receptive to the senator’s idea of a textile museum and offered her the museum’s own textile collection, Legarda said she was “frustrated” when she learned that everything was in a bodega (warehouse).

The fabric collection was classified according to geographical source, with each clothing or textile tagged with information as to its source, material, the tribe that produced it, and those who wear it. Most of the country’s indigenous fabrics are made from any or a combination of the following: abaca, cotton, piña (pineapple), silk, tree bark and bast that, Labrador said, is a “type of mulberry tree.”

While Barns takes pride on the exhibit’s being the first of its kind in the country, Labrador said the story behind each piece of fabric and cloth is more important.

“The Bontoc people, for instance, start collecting textiles for their own funeral once they have grandchildren. Being a grandparent means they could already transcend this life. They’ve already left their legacy,” she explained.

“We can also talk about how textiles are used in everyday life and special occasions. The question of ‘what do I wear’ is a daily issue. We are always thinking of what to wear because we are social beings. It doesn’t necessarily mean people want to use textiles for rituals,” explained Labrador, an anthropologist who earned her doctorate at Cambridge University.

She added: “We’re talking about indigenous people but we always see and analyze what they’re wearing from the point of view of function. Sometimes we forget that they wear this simply because they want to look good like we do.”

Legarda, one of the best dressed in the Senate, said the plan to put together the exhibit began “long, long ago when I started visiting textile museums of different countries.”

She cited the textile gallery in Luang Prabang, Laos, and a similar exhibit in Hanoi, Vietnam. “I figured, we are so rich in terms of our resources from our indigenous peoples, so why can’t the Philippines have one?” Legarda recalled.

The exhibit, she added, could revolutionize the Philippines’ dormant indigenous textile industry, put the country on the global fashion map and reap economic and environmental benefits as well.

“Textile is relevant because it means livelihood,” she explained. “When we wear clothes made of pineapple or banana fiber, abaca or cogon (grass), we provide livelihood to agriculture workers and our farmers. (When) we use the lowly regarded water lily to create fabric, we utilize objects that we thought had no use or value.”

The exhibit features fabrics of traditional materials and from various ethnic groups. Among them is a naturally dyed salual or underpants made from abaca worn by Bagobo males in the Davao region.  There’s also a cotton and silk blend pis siyabit or headcloth-cum-sash worn by Tausug warriors from Jolo, Sulu, as well as a pamokan or woman’s blouse made of abaca and cloth woven by the Tagakaolo (a tribe in Davao).  Also in the exhibit is an owes or a blanket woven through a technique called sinankusilos, that is unique to the Tingguian of Abra.

The museum’s showpiece, however, is a death shroud made of Bonton cloth retrieved from a cave in Romblon. Made of abaca and colored with natural dyes, it is known as the oldest existing textile in the country and is considered the earliest existing specimen of warp tie-dye textile in Southeast Asia.

Legarda’s personal collection is included in the exhibit, among them a black crepe de chine baro’t saya that belonged to her great grandmother, Agapita Torres Bautista.  There are other traditional women’s outfits, like the intricate T’boli blouse with appliques and beads that the senator herself has worn at public events.

“People will say textile is irrelevant (malayo sa bituka). No, this is actually a gut issue. Every weave, every fabric tells a story. This is the soul of who we are as a people. We have to preserve that,” she said.

And the senator, apparently, meant that literally.

Many of the tribes or indigenous people producing fabric the traditional way are dwindling, she said, because the lack of support from consumers and neighboring communities has made the enterprise unviable.

Poverty and the lure of overseas jobs also mean that the next generation expected to carry on the tradition is lost.

But compared to the requirements of big business, Legarda said that the capital needed by most traditional weavers is niggardly. “The women (weavers) who did not receive formal education can purchase a P5,000-handloom or backstrap loom. Though the industry and artistry are dying, P5,000 can keep them alive,” she noted.

And the government can help a lot, she said. “When I went to Banaue, the women’s cooperative in the center of town had a P180,000 existing loan with the [Department of Science and Technology]. Every month they pay installment to sustain their livelihood,” she said.

“I asked the old Ifugao lady how much she earns and it is P180 a day. That would be enough to raise her family and allow her to weave 5 yards or 5 meters of fabric a day.  This is sustenance. So textiles and fabrics are a gut issue,” she stressed, adding that “textile is linked to agriculture. It means jobs for farmers, livelihood for rural women and food on the table for their families.”

One issue that needs to be dealt with would be copyright and the protection of intellectual property, she continued. “Equally important is the promotion of the textiles and protection of [cultural] traditions through patents to restore, protect and preserve our culture.”

The senator maintained that treating the traditional fabric designs, patterns and weaving techniques as the country’s intellectual property is nonnegotiable.

“Unless we do this, the future generations would not know what is inabel from Ilocos or ikat worn by the B’laan. Or the T’boli’s colorful beadwork and natural dyes. And what about the malong of the Maranao and the looms of the Yakan tribe? All would be gone if we do not have documentation of our textiles.”

“These are designs that go way back to our ancestors. It’s not something we are inventing. We’re just reinventing ourselves and going back to the past and rediscovering it,” she said.

“In my speeches, I insist we patent and protect the copyright of the art of our  indigenous peoples including the designs of malong and ikat. These are easy to pirate and I don’t want to mention countries capable of doing so,” Legarda added.

The senator’s excitement about the fabric exhibit is fed by global fashion’s current focus on tribal patterns and artisan fabrics.  She believes the Philippines’ indigenous fabrics can indulge this trend.

The senator said businessman Ricco Ocampo attended the Paris Fashion Week recently and reported that a famous couturier had used jusi (banana silk fiber) in a gown with a $2,000-price tag.

“He asked whether I could find (jusi) suppliers. Of course! We have them all over the country, not just of jusi but of piña. Lumban [in Laguna] hosts very skilled calado embroiderers.  So do Tibiao in Antique and Barangay Arevalo in Iloilo,” Legarda said.

“We have a limited supply (of jusi) because the demand is also limited. But when there’s greater awareness, we (would) need to help (the suppliers) become more efficient to meet the demand. We also encourage businessmen to invest in this as a business so we don’t need to outsource the processing requirements and import it again. It would be ideal if we had the manufacturing here,” the senator added.

Legarda noted that the Philippines already has the “plant resources and human resource in terms of idle labor, talented artistry and creativity in terms of design.”

“Imagine all these small co-ops, women’s groups and backyard industries of women, men, youth, rural folk. If we empower them, you are subtracting from unemployment. This is the key to jobs in agriculture. It can revolutionize our agricultural sector and our labor sector in terms of rural women,” she said.

Legarda believes the plan should be easy to execute since the necessary laws are in place.

“We already have the Solid Waste Management Act, which encourages the use of fibers like water lily, which only goes to waste, and the Tropical Fabric Law, filed during my first term as senator, which mandates government officials and employees to use Philippine tropical fabric for office wear. And the Department of Agriculture, through the FIDA, should promote our agriculture by promoting the use of Philippine textile,” she said.

“Why don’t we make our indigenous textiles as prosperous and economically viable as call centers? Perhaps, that’s a good comparison and I want to be the engine to speed it up,” she said.

Legarda said she often visits the textile museum before she goes to the Senate for the impeachment trial of Chief Justice Renato Corona.

“I come here before the trial,” she said.  “It makes me whole as a person and it inspires me so when I go to the Senate where I will spend five hours of toxicity; there’s enough positive energy to counter the negative.”