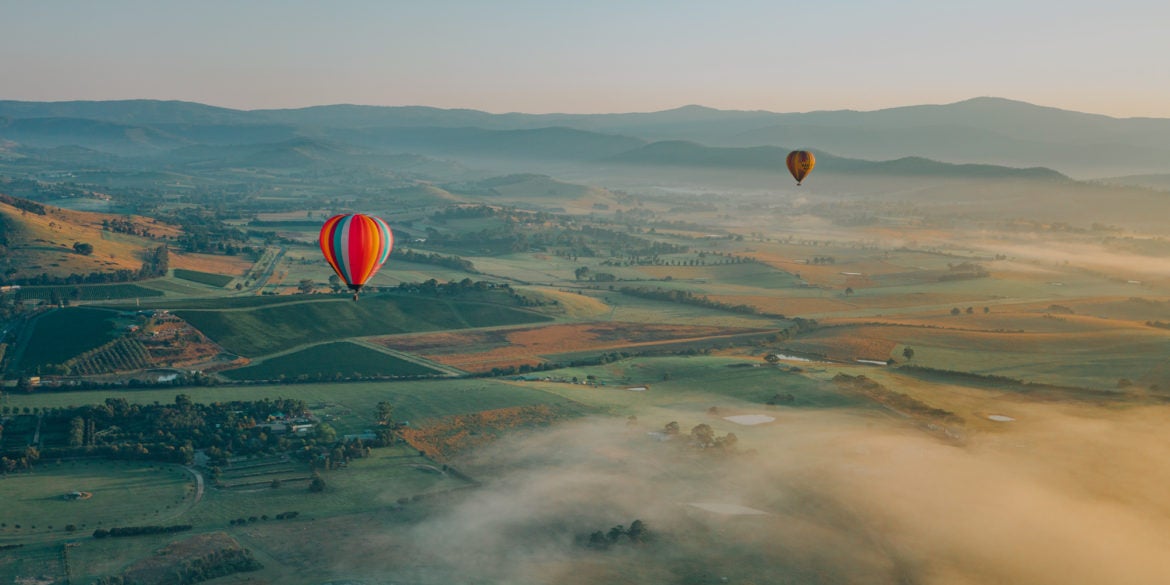 A city beaming with personality and rich culture, Melbourne, Australia is more than just brunches and coffee (Although both are A+).

It’s the capital of cool, where natural and urban living finds harmony. So it’s no surprise that it is also the only major city in the world where you can fly commercially over the city on a hot air balloon.

A unique and memorable way to experience Melbourne, Global Ballooning Australia provides the rare opportunity of being able to actually fly over the city, and see it with fresh eyes.

The incredible team at Global Ballooning Australia explain the different options they offered to customers who were flying with them in detail. In our case, we were making the trip down via transfer to Yarra Valley. A 32km distance from Melbourne City, the region is best known for being Australia’s wine capital.

Upon arrival at our meeting place, we embarked on a 50-minute long journey to Yarra Valley where the actual flight would take place.

Prepping for the flight

While prepping, our lovely pilot Brian Garth briefed us on the safety protocols and policies we needed to comply with in order to have an enjoyable flight. From landing positions to the dos and don’ts of what to do when in the air, everything was brief and informative. They are also the only company in Australia that conducts quarterly safety seminars which are audited by CASA (Civil Aviation Safety Authority).

Inclusion is also a vital aspect of Global Ballooning’s ethos. In fact, they’re the only company in Australia to have an Easy Access Basket for people with disabilities — an honest reflection of their mission to provide memorable experiences for everyone.

In our case, Pilot Brian’s had over 4300 hours of flight time which equates to about 4000 flights!  “I have flown all over Australia, across Kenya’s Maasai Mara game reserve, and over the temples of Bagan in Myanmar. I still consider the Yarra Valley to be the most consistently spectacular,” he notes.

More than the actual flight itself, another memorable aspect of the Global Ballooning Australia experience is setting up the balloon. After our safety briefing, pilot Brian explained how the balloon was set up which began with the process of blowing cold air into it by means of an extremely strong industrial fan (or something of the sort).

He asked for two volunteers to help him hold up the balloon, and just like how you’d graze an empty plastic bag through the air, we watched as the balloon slowly inflated. Once enough cold air is blown into it, the process of blowing hot air into it began! Gradually, he distributed us into the basket which had 5 different sections, one being in the very center, which serves as the nucleus of the entire balloon. It would be where he would control the direction, height, and speed that the balloon would go.

After all of us had climbed into the basket, Brian briefed us on safety measures one last time, and the next thing I knew, we were off!

Take-off didn’t feel anything like how it would be on a plane. In reality, I didn’t even realize that we had gotten off the ground until I looked over the basket and realized things started looking smaller than usual. It was seamless, to say the least, and had a strangely calming feel to it. While everyone began to take pictures, there was a shared silence of both awe and wonder as we looked at the views of Yarra Valley.

As we began to gain momentum and fly higher, we saw the vast landscapes of Australia’s wine country, and its beautiful hills and billabongs. We caught a glimpse of the Yarra River (Which turned out to be the same river that flowed into Melbourne City!) beautiful amber-colored trees, vineyards, and even a few native animals! Yep, we even saw a couple of Kangaroos and Wombats. 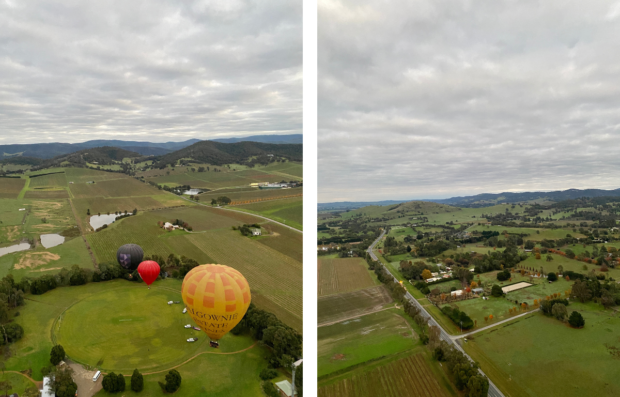 Once in the air, the feeling of calmness overcame everyone in the basket. Everyone was still, and just looking at the ground below, taking in the views. We also had the chance to take a few photos in the basket while in the air courtesy of Global Ballooning, inclusive of the package!

The flight lasted for about 1 whole hour before we prepped for landing at a nearby paddock, and soon enough, we were getting ready to head back to land. While prepping for landing, our pilot instructed us to get ready with our landing positions and to brace ourselves for a little bump. It was quick and easy. I’ve had pilots from major airlines land so much worse.

After the flight, we were all instructed to slowly exit the basket. With the assistance of Global Ballooning staff, we all hopped off conveniently and even got to take a few photos of the balloon as we slowly began to see it deflate. Calling our attention whilst doing so, Pilot Brian showed off how he would open the vents at the top of the balloon to let out the air, and as he did so, we watched it slowly descend. It was also incredibly fun to help out in putting the balloon away! Although completely voluntary, many of our companions during the trip assisted in putting away the balloon and basket alongside the Global Ballooning staff.

Then, we were taken back to our initial meeting place, Balgownie Estate, where we were greeted with delicious champagne and a breakfast buffet. Upon your arrival at the estate, you’re taken to a separate section where it’s just you and your fellow passengers where you can privately enjoy your breakfast. They served everything from yogurt, fruit, pastries, eggs, and bread. A selection perfect for post-flight hunger, all while enjoying a beautiful view of the vineyard just across the estate. 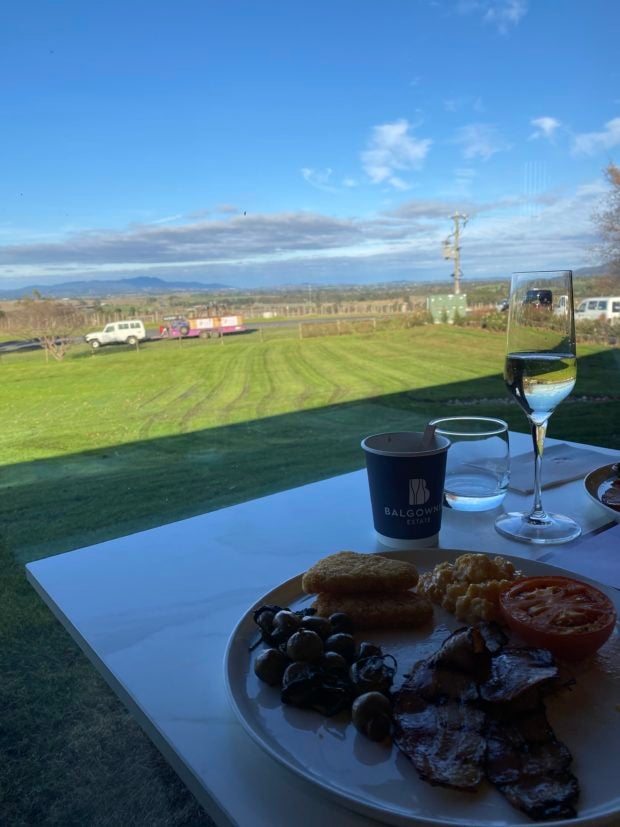 Once finished with breakfast, everyone is slowly ushered into the receiving area of the estate and prepped to hop back into the bus, and drive back into Melbourne City.

To say that this experience was amazing feels like an understatement. An incredibly once-in-a-lifetime opportunity, I was also able to hear about the different stories of Global Ballooning Australia’s passengers such as this one individual who had suffered a stroke a few months prior to his flight. After having gone through such a scare, he finally decided to just do it, and hop on the hot air balloon. During our actual flight itself, I witnessed a couple get engaged and saw how the girl’s face lit up as she saw the huge sign asking “Will you marry me?”.

This is the sense of whim and wonder that Global Ballooning Australia harbors. A family-grown business, founder Kiff Saunders has passed on ballooning to his children who are now also licensed to fly hot air balloons. From the different stories each passenger tells to the memories made on each flight, I say with no hesitation that experiences such as this are what stay with you forever.