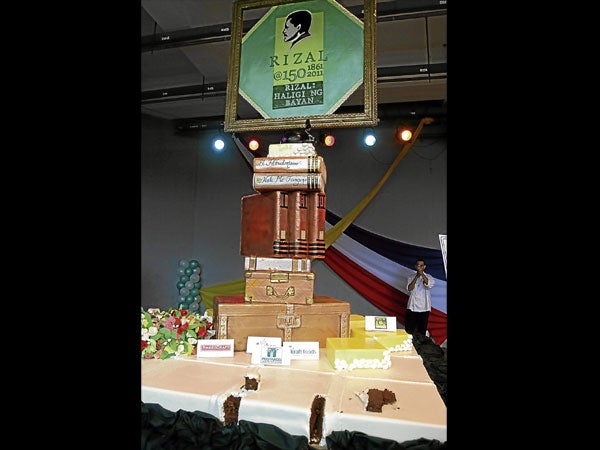 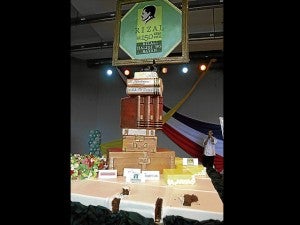 The vintage-theme fondant cake called “An Ode to a Patriot” paid tribute to the National Hero as a traveler and writer.

Local officials got a taste of the carrot-walnut creation, and people had their photos taken with the giant cake as souvenir. A thousand mini cupcakes with the same base were given out to the crowd.

By noon, all the edible parts of the cake were gone and what remained ended up in the bin, but for the chefs of Magsaysay Center for Hospitality and Culinary Arts (Micah) who did the cake, it was worth all the work.

The Department of Tourism, through Secretary Alberto Lim who is chef Manuel’s cousin, approached Micah to do a birthday cake as a highlight of the celebration—but they were given only three weeks to come up with it, and with no budget at that.

Why did they do it?

“It was a challenge,” Manuel said during an interview over dinner at Lolo Dad’s Café in Manila, with chefs Avendaño and Guevara. “First, it was on such a short notice, then we had to look for sponsors ourselves for the ingredients, the manpower, volunteers. We are glad to have been able to pull it off after stressful weeks of preparation, and we had fun while at it.”

Chef Avendaño’s first design was a modern geometric cake draped with the Philippine flag, with yellow stars that pop for accent. They listed the ingredients according to this model, and thankfully, generous sponsors pitched in. Peotraco supplied 150 kilos of sugar, Sweet Craft gave walnuts and the Styrofoam base, Kraft sent over cream cheese, and Anchor sent the butter.

It was all set, only for the National Historical Commission to disapprove the design.

“It was a week before the unveiling, and I thought of the design for two days,” said Avendaño. “I came up with another sketch after two hours, and we were glad it was approved—with adjustments in the measurement of ingredients.” 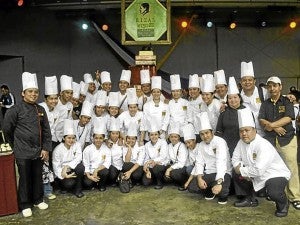 The final design was a cake made up of stacked vintage trunks, topped with hardbound old school books, Rizal’s famous novels “El Filibusterismo” and “Noli Me Tangere,” and his trademark hat. On top was a fondant brass frame with a poster that said “Rizal @ 150 1661-2011, Rizal: Haligi ng Bayan.” On the base were shell details, for a Filipiniana touch.

The group needed 150 more kilos of sugar with the change of design, and it was delivered by Peotraco’s Abigail See with no charge at all. They chose carrot-walnut as base because it is a dense and stable cake that withstands humidity and stays moist even after a long time. Fondant icing, while moldable like clay, is a difficult material to manipulate, so the group had to be very careful not to make any mistakes.

Volunteer Micah students and alumni worked on “shifts” 12 hours a day, and 24 hours on the day of presentation in the school. A group made the fondant, while another made breakfast and snacks for the crew.

“We had to turn people down. A team of 30 was enough and manageable,” said Manuel.

Then there was the problem of the weather. The cake was supposed to be displayed in the center of the park, but there was a heavy downpour that morning, so it was moved to a covered area. A truck was used to transport the cake from the Micah campus to Luneta.

The cream cheese used to assemble the cake was also sensitive, added Guevara. “We could only keep it until a certain time, so it couldn’t be made ahead. It had to be fresh upon the presentation.”

Assembly was a mad dash, with everyone moving quickly to make the cake available by 10 a.m., in time for the arrival of government officials and VIPs.

“We finished it just in time, and we are thankful for the people who have worked together with us, the sponsors, the volunteers who put time and effort in making this project,” added Manuel.

It was still raining hard after the cake display was done, and the chefs had to walk, drenched, from Luneta to the Micah office on UN Avenue in Taft because roads were closed to vehicles, and even trusty pedicabs were not available.

Will they do a cake this big again?

Fresh off the frenzy and with content smiles from the successful project, the chefs said, “It’s possible.”